For a short window, it appeared that bees were dying off. Environmentalist were quick to blame a new kind of pesticide, Neonicotinoids, known in short form as neonics, but then it turned out that the die-offs were in just one geographical area, which would not be the case if it were due to a pesticide.

Instead, it was likely a combination of environmental changes and perhaps a different sort of pest may try to kill them in the future; the exotic parasite Nosema ceranae and its original native relative Nosema apis. The exotic honey bee parasite may become more common not only due to its superior competitive ability, but also because of climate, according to a new study in Proceedings of the Royal Society B.

A team of researchers believes that the parasite could become more prevalent in the UK in the future and their findings demonstrate the importance of both parasite competition and climate change in the spread of this emerging disease. 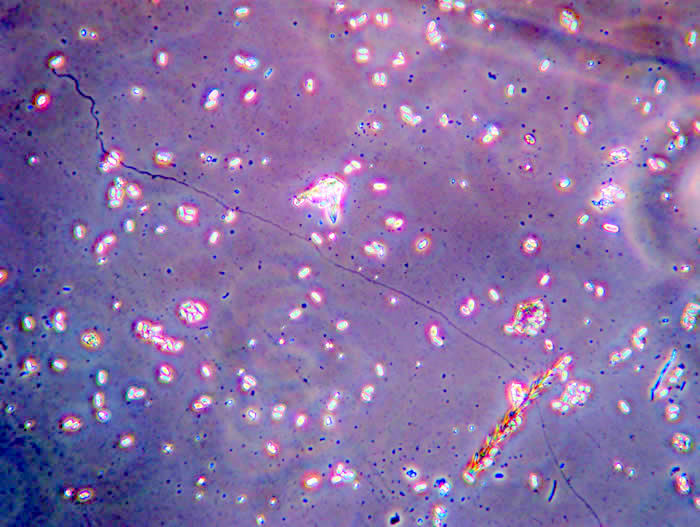 The white oval at upper left is a Nosema ceranae spore that has germinated. Follow the very long polar filament down to the lower right. It was too long to catch in one photo. Credit: University of Georgia

Myrsini Natsopoulou from the Martin-Luther-Universität Halle-Wittenberg said, "Our results reveal not only that the exotic parasite is a better competitor than its original close relative, but that its widespread distribution and patterns of prevalence in nature depend on climatic conditions too."

The research compared pathogen growth in honey bees that were infected with both Nosema ceranae and Nosema apis.

Experiments showed that, while both parasites inhibit each other's growth, the exotic Nosema ceranae has a much greater negative impact on the native Nosema apis than vice versa. By integrating the effects of competition and climate into a simple mathematical model, the researchers were better able to predict the relative occurrence of both parasite species in nature: Nosema ceranae is common in Southern Europe but rare in Northern Europe.

Coauthor of the study, Prof. Robert Paxton of Queen's University Belfast, added, "This emerging parasite is more susceptible to cold than its original close relative, possibly reflecting its presumed origin in east Asia. In the face of rising global temperatures, our findings suggest that it will increase in prevalence and potentially lead to increased honey bee colony losses in Britain."