The article's main author, Yevgeny Churazov (Space Research Institute of the Russian Academy of Sciences), and  co-authors, including Sergei Sazonov of the Space Research Institute and MIPT, reported the results of their analysis of data collected with the INTEGRAL gamma-ray orbital telescope, which they used to detect the radioactive isotope cobalt-56(56Co).

Isotope 56Co has a half-life of just 77 days, and does not exist in normal conditions. However, during a giant thermonuclear explosion of a supernova, this short-lived radioactive isotope is produced in large quantities. Radiating cobalt was registered at the supernova SN2014J, located 11 million light-years from Earth 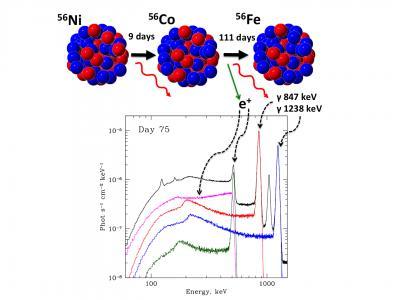 A radioactive decay chain and the spectrum obtained by the INTEGRAL observatory. Note the scale of the vertical axis -- about one gamma quantum an hour per 1cm2! Credit: Nuclear Research Institute RAS

Astrophysicists never obtained similar spectra before. The reason was the rarity of explosions at such a distance – 11 million light-years is a large value on the galactic scale (the diameter of a galaxy is about 100,000 light-years, the distance between stars is a few light-years), but on an intergalactic scale it is a relatively short distance. There are several hundreds of galaxies within a radius of ten million light-years; supernovae produce explosions like this (type Ia explosions) once every few centuries in a galaxy. For example, a type Ia supernova last exploded in the Milky Way in 1606.

SN2014J was registered on January 21, 2014 by astronomer Steve Fossey and a group of students from University College London in the galaxy M82. Fossey reported the discovery, and several observatories, including INTEGRAL, started observations immediately. Russian researchers spent a million seconds of their quota for the use of the INTEGRAL telescope to study the supernova. In addition to the spectra, they obtained data on how the brightness of radiation changes over time.

According to a theory that was developed earlier, during an explosion of the Ia type, the remnants of a star barely radiate in the gamma range the first dozens of days. The star's shell is opaque in this region of the spectrum; a supernova begins to produce gamma radiation only after the outer layer becomes sufficiently rarefied. By that time, radioactive nickel-56 with a half-life of 10 days, synthesized during the explosion, transforms into radioactive cobalt-56, the lines of which were detected by the researchers.

The essence of spectral analysis remains unchanged whatever the nature of radiation. For light, X-rays and even radio waves, scientists first plot a graph of a spectrum, or the relationship of intensity and frequency (or, equivalently, wavelength: wavelength is inversely proportional to frequency).

The graph's shape indicates the nature of the source of radiation and through what environment the radiation has passed. Spectral lines, or sharp peaks on such graphs, correspond to certain events like the emission or absorption of quanta by atoms during transition from one energy level to another.

During formation, cobalt-56 had a surplus of energy, exhausted in the form of gamma rays with energies of 847 keV and 1237keV; other isotopes produced radiation with quanta of different energies and thus could not be confused with cobalt-56.

The data collected by the INTEGRAL telescope also allowed the researchers to assess how much radioactive cobalt was emitted during the explosion – the equivalent of about 60% of the Sun's mass.

Thus, the new results back up simulations of supernovae explosions and also confirm that our planet consists of matter that has gone through thermonuclear explosions of an astronomical scale.