Supernovae stand out in the sky like cosmic lighthouses. Scientists at the Max Planck Institute for Astrophysics and at the National Astronomical Institute of Italy have now found a way to use these cosmic beacons to measure distances in space more accurately. The researchers have been able to show that all supernovae of a certain type explode with the same mass and the same energy - the brightness depends only on how much nickel the supernova contains. This knowledge has allowed the researchers to calibrate the brightness of supernovae with greater precision. This means that in the future, they will use the brightness of a supernova that they are observing through their telescopes to determine more accurately how far away from the Earth the cosmic lighthouse is emitting its rays (Science, 9 February 2007). 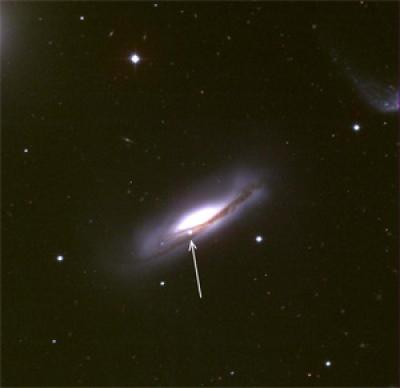 The arrow points to the supernova 2002bo, the explosion of a white dwarf in the galaxy NGC 3190 in the Leo constellation -- 60 million light years away from earth.

The end of a star's life, when the star has become heavy enough, is marked by a huge explosion - a supernova. For a few weeks, a supernova looks almost as bright as a whole galaxy containing billions of stars. Physicists designate the brightest of these supernovae as Type Ia. Their brightness, measured from the Earth, is a measure of their distance from us - but there are several uncertainties. "The question still remains: how suitable are supernovae really for measuring distance? For example, the knowledge that the Universe is expanding rapidly is largely based on observations of supernovae," explains Prof. Wolfgang Hillebrandt. All type Ia supernovae exhibit similar levels of brightness, but they are not exactly consistent.

Scientists from the Max Planck Institute for Astrophysics and the National Astronomical Institute of Italy have now made a breakthrough. They have come to the conclusion that the explosion energy of the type Ia supernovae is almost consistent - it is equivalent to the fusion energy which a white dwarf with around one and half times the mass of the Sun can develop. However, the amount of radioactive nickel and medium-weight chemical elements such as silicon vary from supernova to supernova and explain the difference in their brightness. The more nickel a supernova contains, the brighter it shines.

In the explosion, nuclear fusion of carbon and oxygen creates large quantities of radioactive atomic nuclei; in some supernovae, this is mainly the radioactive isotope 56 of the element nickel. The energy from its radioactive decay is converted to light in the supernova. The fusion therefore supplies both the energy and the light for the explosion. The nuclear fusion, however, can end with lighter atomic nuclei like silicon, for example. This creates the same amount of energy, but the supernova is not so bright. The researchers identify this situation when they also see the silicon in the light spectrum of the supernova.

Over the last four years, in a study forming part of a European joint venture lead by the Max Planck Institute for Astrophysics, scientists have looked at 20 Ia supernova explosions, following each one for several weeks. Using spectroscopic and photometric data and complicated numerical simulations, they arrived at results that now make it possible to refine existing calibration methods. Astronomers calibrate the differences in brightness of the supernovae with their light curves; that is, the way the brightness develops over time in newly discovered supernovae. The light curves of brighter supernovae diminish more slowly than those of less bright supernovae. Up to now, the weakest link in this calibration method has been limited knowledge about the supernova explosions themselves: what causes the differences in brightness and are the corrections made to them justified? The supernovae that play a part in cosmology in measuring distances exploded just as our solar system was coming into existence, or even earlier. Consequently, there is no guarantee that these are the same explosions as those for which the light curves have been calibrated.

In order to exclude possible systematic differences, scientists need to have a very good understanding of the explosions, and the scientists from the Max Planck Institute for Astrophysics and the National Astronomical Institute of Italy have now made a large contribution to this. "Our surprising results have for the first time delivered a solid basis on which we can use supernovae to measure distances in space," says Wolfgang Hillebrandt. "We now understand the differences in the brightness of supernovae better and can calibrate this cosmic yardstick accurately in the future." These findings will also benefit cosmologists who use the brightness of supernovae to deduce dark energy. Scientists believe that it is this dark matter that is responsible for the rapid expansion of the Universe.

Note: This article has been adapted from a news release issued by Max-Planck-Gesellschaft