Researchers Watch Glass Flipping From One Structure To Another Under Pressure
By News Staff | August 30th 2014 02:00 PM | Print | E-mail

Glass is ideal for applications that require resistance to thermal shock or to chemically harsh environments and manufacturers commonly use additives such as boron oxide to tweak its properties by changing the atomic structure of glass.

Researchers have captured atoms in borosilicate glass flipping from one structure to another as it's placed under high pressure.  Boron oxide is often added to glass to control a range of properties, including chemical durability, flow resistance, optical transparency and thermal expansion. Material scientists know that the structure around the boron atoms in borosilicate glass changes with pressure and temperature, switching from a flat triangular configuration with three oxygen atoms surrounding one boron atom to a four-sided tetrahedron, with four oxygen atoms surrounding one boron.

Until know, material scientists have only been able to study these structures in one state or the other, but not in transition. 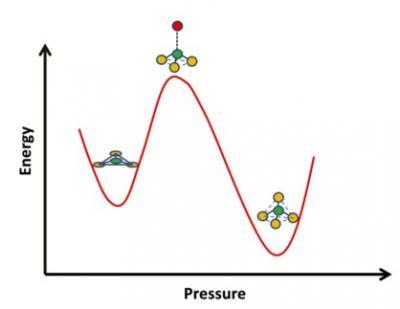 The findings may have implications for understanding how glasses and similar "amorphous" materials respond at the atomic scale under stress, said Sabyasachi Sen, professor of materials science at UC Davis and senior author of a paper in Science. Sen and graduate student Trenton Edwards developed a probe that enabled them to make nuclear magnetic resonance (NMR) measurements of the environment of boron atoms in glass under pressures up to 2.5 Gigapascal.

They found that under pressure, the flat triangles of boron and three oxygen atoms first deform into a pyramid shape, with the boron atom pushed up. That may bring it close to another oxygen atom, and let the structure turn into a tetrahedron, with four oxygen atoms surrounding one boron.

Intriguingly, although glass is structurally isotropic and the stress on the glass is the same in all directions, the boron atoms respond by moving in one direction in relation to the rest of the structure.

"This is an unexpected finding that may have far-reaching implications for understanding a wide range of stress-induced phenomena in amorphous materials," Sen said.