News Staff
A prototype of a social robot has been developed with an eye toward supporting independent living for the elderly, in partnership with their relatives or carers.

It's based on the art service platform called Care-O-bot® 3 and works within a smart-home environment. Dr. Farshid Amirabdollahian, a senior lecturer in Adaptive Systems at the University of Hertfordshire, led a team of nine partner institutions from across five European countries as part of the ACCOMPANY (Acceptable Robotics Companions for Ageing Years) project.

Over the past three years the project team successfully carried out a wide range of studies which included, detecting the activity and status of people in a smart-home environment as well as focusing on robots’ ability to remember and recall. Developments culminated into three interaction scenarios, which were subsequently evaluated by involving elderly people and their formal/informal carers across France, the Netherlands and the UK. 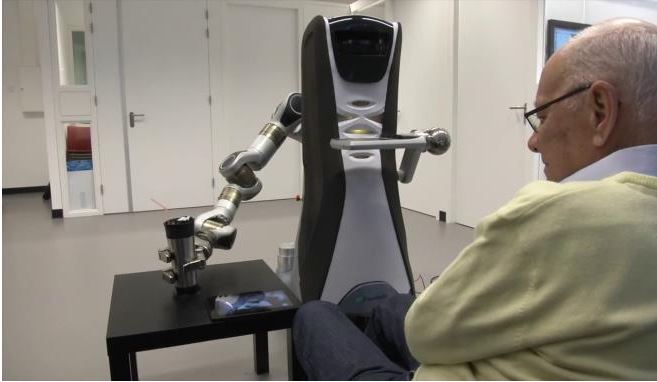 ACCOMPANY’s results demonstrated that a social robot can potentially help to prevent isolation and loneliness, offering stimulating activities whilst respecting autonomy and independence. The project received “excellent results” from its final review in Brussels.

Amirabdollahian said, “This project proved the feasibility of having companion technology, while also highlighting different important aspects such as empathy, emotion, social intelligence as well as ethics and its norm surrounding technology for independent living.”