Astronomers have discovered an extrasolar planet only three times more massive than our own, the smallest yet observed orbiting a normal star. The star itself is not large, perhaps as little as one twentieth the mass of our Sun, suggesting to the research team that relatively common low-mass stars may present good candidates for hosting Earth-like planets.

The astronomers used a technique called gravitational microlensing (1) to find the planet, a method that can potentially find planets one-tenth the mass of our own.

The gravitational microlensing technique, which came from Einstein's General Theory of Relativity, relies upon observations of stars that brighten when an object such as another star passes directly in front of them (relative to an observer, in this case on Earth). The gravity of the passing star acts as a lens, much like a giant magnifying glass. If a planet is orbiting the passing star, its presence is revealed in the way the background star brightens. A full explanation of the technique follows this release. 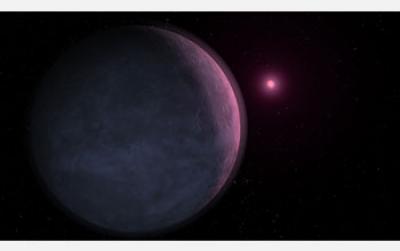 Artist's conception of the newly discovered planet MOA-2007-BLG-192Lb orbiting a brown dwarf "star" with a mass of only 6 percent of that of the Sun. Theory suggests that the 3-Earth-mass planet is made primarily of rock and ice. Observational and theoretical studies of brown dwarfs reveal that they have a magenta color due to absorption by elements such as sodium and potassium in their atmospheres. If the host star has a mass of 9 percent of that of the Sun, at the other end of the margin of error for the new microlensing data, the star would be a red dwarf about 100 times brighter than the brown dwarf, but 1000 times fainter than the Sun. Credit: NASA's Exoplanet Exploration Program

Led by David Bennett of the University of Notre Dame, the international research team presents its findings in a press conference Monday, June 2, 2008, at 11:30 a.m. CDT at the American Astronomical Society Meeting in St. Louis, Mo.

"This discovery demonstrates the sensitivity of the microlensing method for finding low-mass planets, and we are hoping to discover the first Earth-mass planet in the near future," said Bennett.

Using standard nomenclature, the star hosting the newly discovered planet is dubbed MOA-2007-BLG-192L with MOA indicating the observatory, 2007 designating the year the microlensing event occurred, BLG standing for bulge, 192 indicating the 192nd microlensing observation by MOA in that year and the L indicating the lens star as opposed to the background star further in the distance. The planet maintains the name but adds a letter designating it as an additional object in the star's solar system, so it is called MOA-2007-BLG-192Lb.

MOA-2007-BLG-192L resides 3,000 light years away and is classified as either a low-mass hydrogen burning star, one that sustains nuclear reactions in its core as our Sun does, or a brown dwarf, an object like a star yet without the mass to sustain nuclear reactions in its core. The researchers were unable to confirm which category the star fits into due to the nature of the observations and the margin of error.

With support from the National Science Foundation (NSF), Bennett has been one of the pioneers in using gravitational microlensing for detecting low mass planets. He has been working with collaborators around the world to find a number of planets that are ever closer in size to our own.

For the most recent discovery, the research collaborators took advantage of two international telescope collaborations: Microlensing Observations in Astrophysics (MOA), which includes Bennett, and the Optical Gravitational Lensing Experiment (OGLE).

Researchers in New Zealand made the initial measurements of the new planet and its star using the new MOA-II telescope at the Mt. John Observatory. The observatory's MOA-cam3 camera, in one observation, can capture an image of the sky 13 times larger than the area of the full moon. Researchers in Chile made follow-up observations using high angular resolution adaptive optics images at the Very Large Telescope at the European Southern Observatory. Data from the observations was analyzed by scientists around the world hailing from five continents.

"This discovery is very exciting because it implies Earth-mass planets can form around low-mass stars, which are very common," said Michael Briley, NSF astronomer and the officer who oversees Bennett's grant. "It is another important step in the search for terrestrial planets in the habitable zones of other stars, and it would not have been possible without the international collaboration of professional and amateur astronomers devoted to measuring these signals."

The team has written a paper about the new planet discovery and it has been accepted for publication in the Sept. 1, 2008, issue Astrophysical Journal. In addition to NSF support, Bennett is also funded by the National Aeronautics and Space Administration.

(1) The gravitational microlensing technique is based on a concept first discussed by Albert Einstein in the early 20th century. When astronomers observe a star, the light waves generally travel straight from the star to the telescope. However, if another star passes directly in between, even if great distances separate the two, the gravity of the nearer object acts like a lens and magnifies the incoming light.

Telescopes cannot resolve the details of the magnified image, but they do notice a peak in light intensity, and when a planet is present around the closer star, the planet's gravity adds a small peak of its own. Additional planets reveal themselves by further altering the light signals.

Astronomers can use the light-peak features to determine how large an extrasolar planet is and how far away it is from its star. This method is 50 times more likely to detect planets of approximately twice the mass of Jupiter than it is to detect planets closer to the mass of Earth. However, even relatively tiny, low-mass objects can give a strong peak signal if alignment is perfect.

Of the nearly 300 extrasolar planets discovered to date, most were discovered using a different technique, known as the radial velocity method. This technique uses the fact that two objects orbiting each other will orbit about their common center of mass. If one object is very bright (the star) and the other is very dim (the planet), the presence of the planet is revealed by the apparent motion of the star about the common center of mass.

The motion can be detected by observing the spectrum of the star. Dark lines in the spectrum, resulting from various elements in the star's atmosphere, will appear to shift back and forth as a result of the star's motion. The back and forth motion, or wobble, reveals the size and orbit of the planet. While incredibly effective, existing technology utilizing this method has so far found mainly large, Jupiter-like planets or smaller planets that orbit too close to their host stars to harbor life, but research is ongoing.