News Staff
One of the most fundamental predictions of Einstein's theory of relativity is the existence of black holes.

Although gravitational waves from binary black holes have been detected, direct evidence using electromagnetic waves hasn't happened and astronomers are searching for it with radio telescopes.  But then how can you tell them apart? Radio images have a limited resolution and image fidelity and at realistic image resolutions, even highly non-Einsteinian black holes seem like normal black holes.

It requires inference. To try and bridge the gap, astrophysicists have created and compared self-consistent and realistic images of the shadow of an accreting supermassive black hole - such as the black-hole candidate Sagittarius A* (Sgr A*) in the heart of our galaxy - both in general relativity and in a speculative different notion (no, really) of gravity. Their goal was to test if Einsteinian black holes can be distinguished from those in alternative theories of gravity.

Not all of the light rays (or photons) produced by matter falling into a black hole are trapped by the event horizon, a region of spacetime from which nothing can escape. Some of these photons will reach distant observers, so that when a black hole is observed directly a “shadow” is expected against the background sky. The size and shape of this shadow will depend on the black-hole’s properties but also on the theory of gravity.

It's a model, so bring goggles

Because the largest deviations from Einstein’s theory of relativity are expected very close to the event horizon and since alternative theories of gravity make different predictions on the properties of the shadow, direct observations of Sgr A* represent one approach for testing gravity in the strongest regime. Scholars investigated whether it is possible to distinguish between a "Kerr" black hole from Einstein’s gravity and a "dilaton" black hole, which is a possible solution of their competing belief about  gravity.

They studied the evolution of matter falling into the two very different types of black holes and calculated the radiation emitted to construct the images. Furthermore, real-life physical conditions in the telescopes and interstellar medium were used to create physically realistic images. 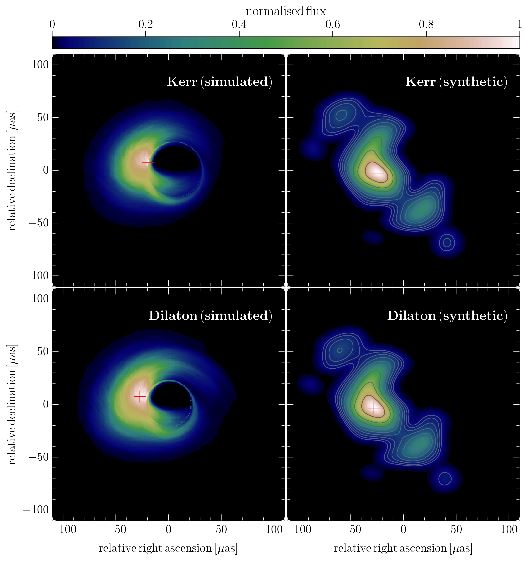 Conclusion: In other notions of gravity, black holes can masquerade as Einsteinian. But the search for strong evidence of a black-hole shadow in this universe continues.