News Staff
By looking at the ‘shadows’ of two supermassive black holes in the process of colliding, astronomers may have a way to measure black holes in distant galaxies and test competing theories of gravity.

Three years ago, the first ever image of a black hole, at the center of galaxy Messier 87, came into focus thanks to the Event Horizon Telescope, a global network of synchronized radio dishes acting as one giant telescope.

Now a new imaging technique could allow astronomers to study black holes smaller than M87’s, a monster with a mass of 6.5 billion suns, harbored in galaxies more distant than M87, which at 55 million light-years away, is still relatively close to our own Milky Way. 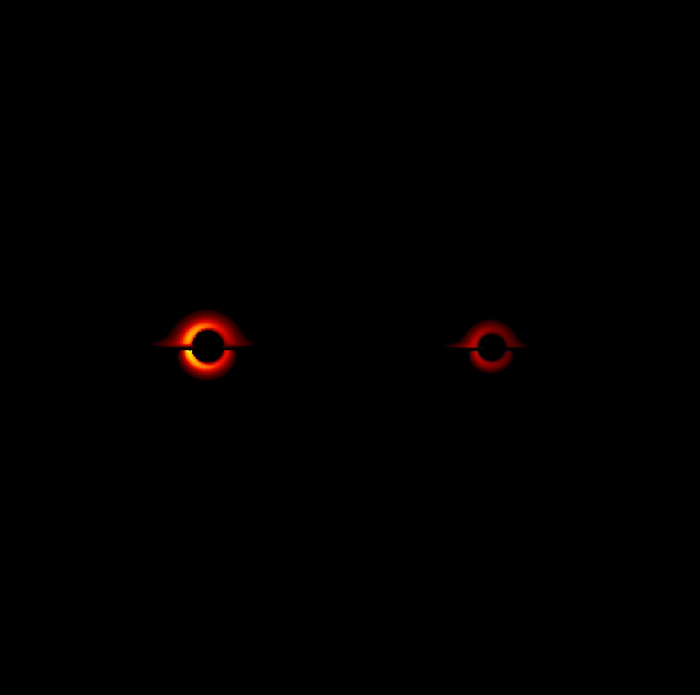 To make it work, you need a pair of supermassive black holes in the throes of merging. Second, you need to be looking at the pair at a nearly side-on angle. From this sideways vantage point, as one black hole passes in front of the other, you should be able to see a bright flash of light as the glowing ring of the black hole farther away is magnified by the black hole closest to you, a phenomenon known as gravitational lensing.

The lensing effect is well known, but what the researchers discovered here was a hidden signal: a distinctive dip in brightness corresponding to the "shadow" of the black hole in back. This subtle dimming can last from a few hours to a few days, depending on how massive the black holes, and how closely entwined their orbits. If you measure how long the dip lasts, the researchers say, you can estimate the size and shape of the shadow cast by the black hole’s event horizon, the point of no exit, where nothing escapes, not even light.

Black hole shadows may also hold the secret to the true nature of gravity at the very large scale. As you probably know, gravity as we perceive it commonly on earth does not apply to the universe, or it would not be expanding. And it does not apply at the quantum level.

Einstein’s theory of general relativity predicts the size of black holes. Physicists, therefore, have sought them out to test alternative theories of gravity in an effort to reconcile two competing ideas of how nature works: Einstein’s general relativity, which explains large scale phenomena like orbiting planets and the expanding universe, and quantum physics, which explains how tiny particles like electrons and photons can occupy multiple states at once.
News Articles
More Articles All Articles
About