News Staff
An international team of over 200 scientists has captured the first direct images of a black hole. They accomplished this remarkable feat by coordinating the power of eight major radio observatories on four continents, to work together as a virtual, Earth-sized telescope.

In a series of papers published today in a special issue of Astrophysical Journal Letters, the team has revealed four images of the supermassive black hole at the heart of Messier 87, or M87, a galaxy within the Virgo galaxy cluster, 55 million light years from Earth. 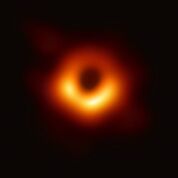 All four images show a central dark region surrounded by a ring of light that appears lopsided — brighter on one side than the other.

Albert Einstein, in his theory of general relativity, predicted the existence of black holes, in the form of infinitely dense, compact regions in space, where gravity is so extreme that nothing, not even light, can escape from within. By definition, black holes are invisible. But if a black hole is surrounded by light-emitting material such as plasma, Einstein’s equations predict that some of this material should create a “shadow,” or an outline of the black hole and its boundary, also known as its event horizon.

Based on the new images of M87, the scientists believe they are seeing a black hole’s shadow for the first time, in the form of the dark region at the center of each image.

Relativity predicts that the immense gravitational field will cause light to bend around the black hole, forming a bright ring around its silhouette, and will also cause the surrounding material to orbit around the object at close to light speed. The bright, lopsided ring in the new images offers visual confirmation of these effects: The material headed toward our vantage point as it rotates around appears brighter than the other side.