News Staff
Just a few short years ago, CRISPR-Cas9 technology took the world of molecular biology by storm because it allowed a cost-effective way to shut off or turn on traits in organisms without any side effects.

CRISPR is an acronym of Clustered Regularly Interspaced Short Palindromic Repeats, a bacterial defense system. The enzyme Cas9 acts like a pair of ‘molecular scissors’ that can cut two strands of DNA and insert of remove something. Then CRISPR repairs it.

Now it's gotten upgrade. Instead of one or two genes, a new study knocked out 12 at once.

The inheritance of traits in plants is rarely as simple and straightforward as Gregor Mendel originally described. The monk, whose experiments in the 19th century on trait inheritance in peas laid the foundation of genetics, found that one gene determines a specific trait, for example the color of the peas. Now we know it can be a lot more complicated. Frequently there are different genes that, through their interaction with one another, result in certain traits or they are partly redundant, in other words they result in the same trait. In this case, when only one of these genes is switched off, the effects are not visible in the plants. 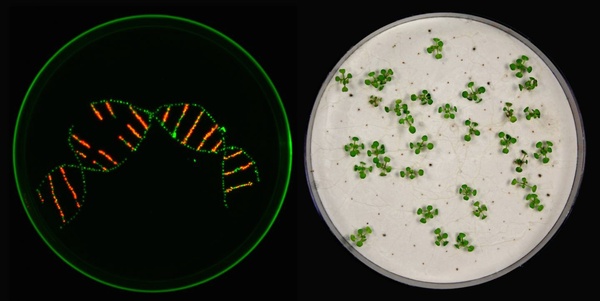 Markers to distinguish between different plant seeds. No difference can be seen with the naked eye. Image: Jessica Lee Erickson

The new work added up to 24 different guide RNAs which guide the scissor enzyme to the desired locations in the genetic material. Experiments on thale cress (Arabidopsis thaliana) and the wild tobacco plant Nicotiana benthamiana proved that the approach works. Up to eight genes could be switched off simultaneously in the tobacco plants while, in the thale cress, up to twelve genes could be switched off in some cases.

Until now, creating multiple mutations was a much more complex process. The plants had to be bred in stages with a single mutation each and then crossed with one another. The new approach overcomes these disadvantages and could prove to be a more efficient method of research. In the future, it will also be possible to test random combinations of several genes in order to identify redundancies. Only in the case of conspicuous changes in the plant's traits would it then be necessary to specifically analyze the genetic material of the new plants.
News Articles
More Articles All Articles
About