Since the Nobel prize for chemistry was awarded to biochemist Jennifer Doudna and microbiologist Emmanuelle Charpentier in 2020, for developing the gene-editing technique known as Crispr-Cas9, Crispr has enjoyed a lot of attention and interest from scientists. The technique has been touted as a possible source of new treatments for diseases caused by genetic mutations, such as muscular dystrophy, and congenital blindness. According to Science Daily, scientists have been able to conduct gene editing on cockroaches using the Crispr technique.

Crispr is short for clustered regularly interspaced short palindrome repeats. The technique has been described as a “molecular scissors” that enables geneticists and medical scientists to edit genes by removing, adding, or changing DNA sections. The technique is easy to use, leading many scientists to believe that novel applications will be readily found. It is the simplest, most precise and most versatile gene editing technique there is.

What Have the Scientists Done With It?

A recently published paper explains that scientists have been able to use Crispr to edit insect genomes in order to help scientists answer fundamental questions about biology. Prior to this, gene editing was done through microinjection of materials into the insect’s early embryos. In addition, the embryo injection must take place between the oviposition and preblastoderm stage, which does not apply to species that give birth instead of laying eggs, or species whose embryos are difficult to access early on, such as cockroaches.

This makes it very hard when it comes to insects. The scientists used “direct parental” Crispr (DIPA-CRISPR) to allow them to inject adult females with Cas9 ribonucleoproteins (RNPs) in their haemocoel, efficiently introducing heritable mutations into developing oocytes. 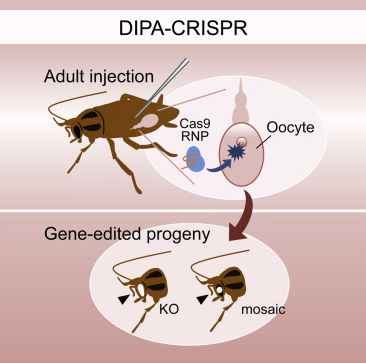 The scientists also found that it is possible to use commercially available standard Cas9 protein that can be directly used for DIPA-CRISPR.This renders this solution widely applicable. DIPA-CRISPR is important because it allows highly efficient gene editing in cockroaches. This discovery means that the technique may be used among a broader array of insects.

Prior injection of eggs was very difficult and cumbersome, whereas this much simpler method will allow scientists to edit genes in over 90% insects of the world’s 1.5 million species of insects.

In the past, with microinjections, progress with gene editing was very slow. Indeed, genetic manipulation was impossible because of the nature of an insect’s reproductive system. Insect gene editing is very costly to do because it requires a lot of specific equipment to pull off and is more technically demanding.

By injecting the Cas9 RNPs into the adult female cockroach’s main body cavity to introduce mutations into the DNA of developing egg cells, the scientists found that gene editing efficiency could be up to 22%. Gene editing efficiency refers to the share of edited individuals from the pool of hatched ones. Red flour beetles had an efficiency of 50% with DIPA-CRISPR. Furthermore, the scientists were able to create gene knockin beetles through the co-injection of single-stranded oligonucleotides (ssODNS) and Cas9 RNPs. This demonstrates the generalizability of using DIPA-CRISPR. There is no need to custom engineer Cas9, or use special reagents to make ovary uptake easier, and so, DIPA-CRISPR is potentially a far simpler, far cheaper, and far more versatile solution, usable in most labs, and therefore, usable across most insect species.

Limitations of the Technique

Although the benefits of DIPA-CRISPR are vast, it is also true that it does require expert knowledge of ovary development in the target species, because the Cas RNPs use vitellogenesis so it can be internalised within the oocyte. Staging the vitellogenic females is therefore potentially very important. Not only is this crucial, it is also difficult to do given the different insect life cycles and reproductive strategies.

DIPA-CRSIPR cannot be used for species for whom oogenesis occurs without any perceivable vitellogenesis, such as aphids during parthenogenetic reproduction. Thi is true of fruit flies such as the Drosophila melanogaster and some higher Diptera. Furthermore, the D. melanogaster has a temporal and spatial range patency that is greatly limited compared to other species.

DIPA-CRISPR has a wide range of potential benefits: namely, it is widely generalisable, it is cost-effective, and has lower technical demands making it usable in most labs. Consequently, scientists can look forward to editing the genes of a wider array of insect species.

DIPA-CRSIPR only requires Cas9 RNAs, simplifying gene editing. Furthermore, commercially available Cas9 can be injected into adult insects, so that custom engineering of Cas9 is no longer required.

It is a unique achievement to open the door to gene editing of over 1.5 million insect species, especially considering the difficulties that gene editing has endured in the past. As a consequence, fundamental biological questions can be asked by scientists. In addition; the technique makes it possible to imagine gene editing of other arthropods, such as mites and ticks and other agricultural and medical pests, and fishery resources such as crabs and shrimps, using the DIPA-CRISPR technique.