Pig Paradox: Hogs Were Domesticated In The Near East So Should Genetically Resemble Near Eastern Wild Boar. They Do Not.
By News Staff | August 12th 2019 03:49 PM | Print | E-mail

News Staff
Ancient pigs went through a complete genomic turnover after they arrived in Europe, according to a new study. They were domesticated in the Near East and logically would genetically resemble the Near East wild boar from which they derived, but they do not.

Instead, they resemble European wild boar.

The work involved sequenced DNA signatures from more than 2,000 ancient pigs including genomes from 63 archaeological pigs collected across the Near East and Europe over the last 10,000 years.

The findings revealed that the first pigs to arrive into Europe alongside farmers 8,000 years ago had clear Near Eastern genetic ancestry. Over the course of the next 3,000 years, however, ancient domestic pigs hybridised with European wild boar to such an extent that they lost almost all their Near Eastern ancestry. 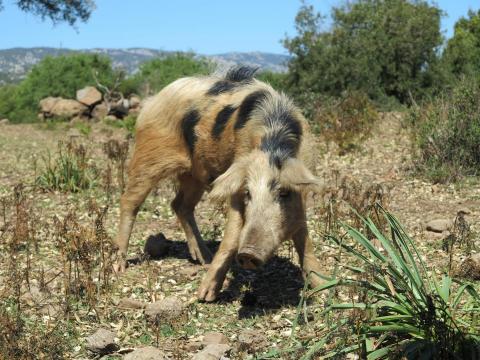 Some low level of Near Eastern ancestry, however potentially remained in the genome of modern European domestic pigs, and this likely explains their characteristic black, and black and white spotted coat colours. Higher level of Near Eastern ancestry were also maintained in pig populations on Mediterranean islands maintained probably because these populations experienced comparatively less gene flow with European wild boar relative to pigs on the continent.

Professor Greger Larson of Oxford, senior author of the study, said, "Having access to ancient genomes over such a large space and time has allowed us to see the slow-motion replacement of the entire genome of domestic pigs. This suggests that pig management in Europe over millennia was extensive, and that though swineherders maintained selection for some coat colours, domestic pigs interacted with wild boar frequently enough that they lost the ancestral signature of the wild boar from which they were derived."

The next steps in the research will be to precisely identify, in the genome of modern European domestic pigs, the few genes that retained their original Near Eastern ancestry.
News Articles
More Articles All Articles
About