Humans may think we are eating paleo - like ancient ancestors - or organic - like before the advent of modern fertilizers and pesticides in the early 1800s - but nothing could be further from the truth. The microbiome of today shares little in common with people of even 100 years ago and if epigenetic claims about diet are true, our genome is different as well.

And nothing should be changed like pigs, which are commonly now descended from Asian and European mixes. But a team of Spanish researchers have obtained the first partial genome sequence of an ancient pig, sequences from remains found at the site of the Montsoriu Castle in Girona.

The data indicate that this ancient pig is closely related to today's Iberian pig and that it was not crossed Asian pigs the way other European pigs were. 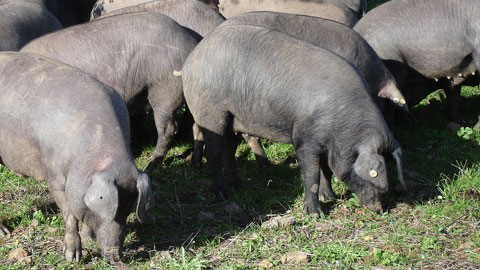 The study in Heredity says the sample dates approximately from the years 1520 to 1550 and is prior to the introduction of Asian pigs in Europe.

"Although it is a very fragmented sample, the gene sequence offers very interesting information," says Miguel Pérez-Enciso, ICREA researcher at Universitat Autònoma de Barcelona. "First of all, we know it is not a white pig because it is missing a duplicated KIT gene which would make it this color. This coincides with the majority of paintings from that period, in which the animal was always painted black or in reddish tones. We were also able to establish that it is very closely related to today's Iberian pig species, and specifically to the 'Lampiño del Guadiana' strain.

"We could say that the Iberian pig is very similar to the pigs which existed in the sixteenth century and no great changes have been registered in this genome. Therefore, more studies will be needed before we are able to distinguish the modern species from the older ones".

The study indicates that the pig was a domestic pig, given that the sequence presents a series of markers typical of domestic pigs and which are very rare or absent in wild boars (the precursor animals to the domestic pig); moreover, this coincides with the historical registers of the castle, which clearly indicates that pig breeding was an important castle activity.

"This close relation between the Iberian pig, the European boar and the ancient pig confirms, as stated in previous studies, that crossbreeding between the Asian pig and modern Iberian pigs did not exist or was insignificant," Miguel Pérez-Enciso notes.

The study also compared the ancient pig sample with the genome of modern pigs of different breeds, including 'Creole' pigs, which are presumably the descendents of the animals Spanish colonizers brought to America.

Researchers demonstrate that this hypothesis is incorrect and that there is very little remaining of those first Spanish animals in today's creole pigs, which were crossbred mainly with international pig breeds.