Cracks in the Amery Ice Shelf show a prominent zig-zag form.  This is a type of crack which forms in a laminated material which is deformed under pressure.   As the laminate is forced into a curve it tends to crack in a series of radial and lateral failures.

The Amery Ice Shelf is the largest of the East Antarctic ice shelves.  Its location is shown in the map below. 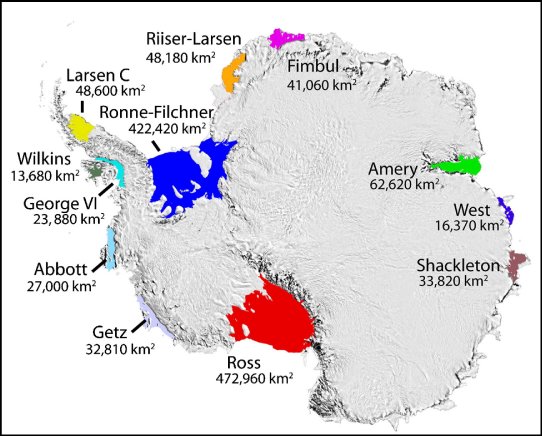 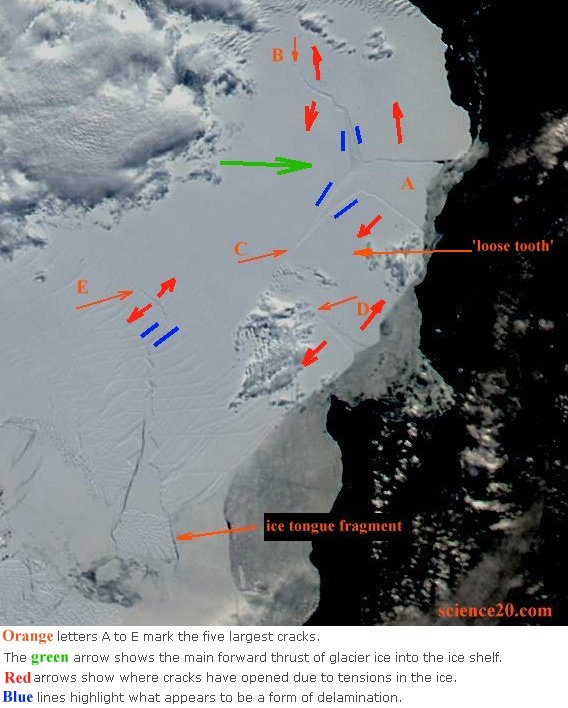 The false colour image below, enhanced from aqua 2017 01 21 shows the rifts in the Amery Ice Shelf more clearly. 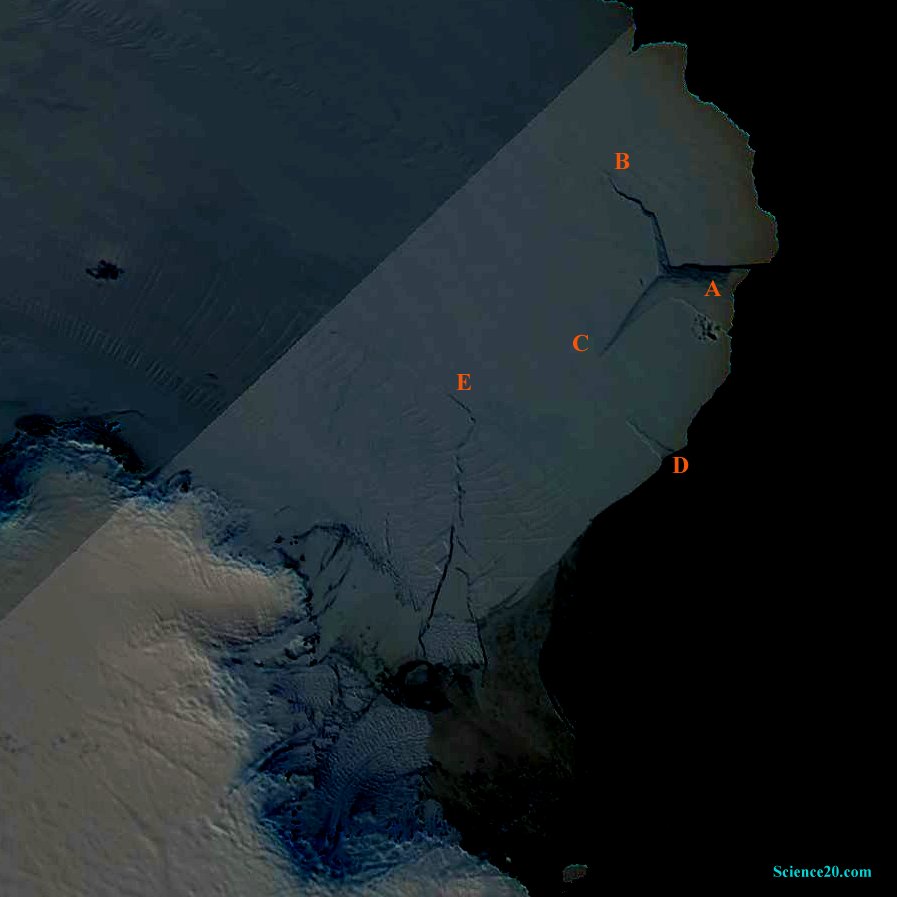 Also seen in the image above is an ice island which is wedging itself into the rift.  If it continues its wedging action it will contribute to the calving process.  Icebergs from the Prydz Times Glacier normally contribute to the mass of the Amery Ice Shelf.  Some of this ice can be seen embedded in the shelf ice to the upper left of the ice island.

To the East is another ice island which, when it floats free, could trigger calving of shelf ice by its impact.  This ice island, Pobeda Ice Island, is a broken off snout of the Denman Glacier.  The false colour image below, also enhanced from aqua 2017 01 21 shows the current status of the ice island and the Shackleton Ice Shelf. 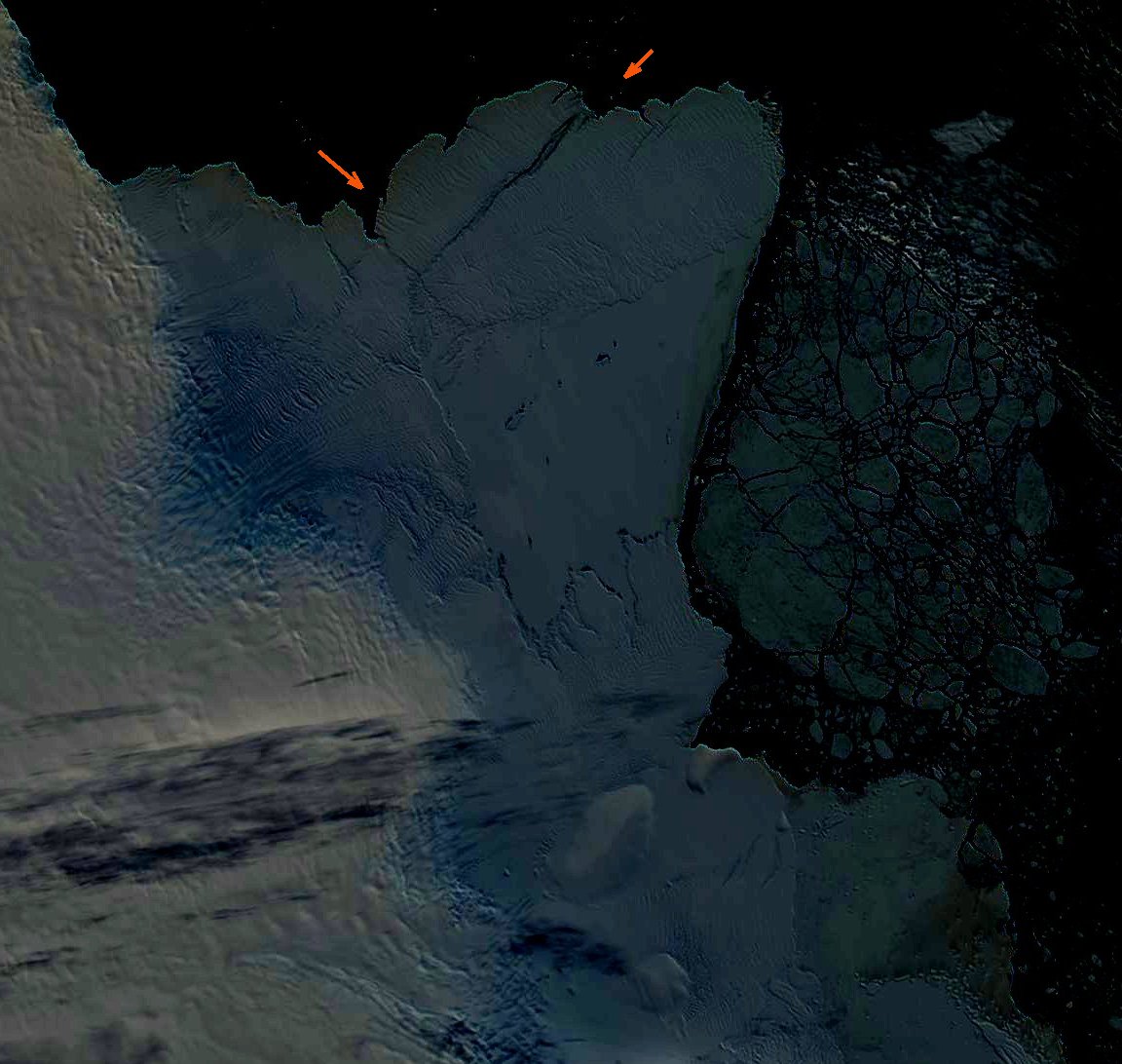 The Amery and the Shackleton ice shelves show periodic changes in size.  In the case of Shackleton the changes appear to be triggered by the formation and ultimate floating free of the ice island.  In the case of Amery it appears that the calving front advances and retreats as calving is triggered by the forward thrust of the glaciers which causes the bulging perimeter to crack.  The cracks propagate in a zigzag manner as they progress along lines of tension and then along weak paths between horizontal 'layers' of ice.

The patterns of rifts in the ice appear to be caused by stick-slip motion in the glaciers.  This would cause the ice to vary in quality as the forward pressure  increases and decreases.  In effect, the ice is composed of alternating regions separated by weaker ice or by fissures.


The rift mechanisms in detail

The mechanisms of rift propagation in ice shelves are little known*.  In this article it is suggested that, at least on the Amery Ice Shelf, the ice is formed as a series of laminar formations due to stick-slip processes. Rift propagation thus arises from the same physical processes which cause  cracking and delamination in laminated materials generally.  Plywood and sedimentary rocks such as slate and sandstone, for example, crack and delaminate under stress in well defined ways.

If glacial ice flowing down a gradient tends to stick at a given point, then it will only flow past that point when sufficient thrust has built up.  If the ice continues to flow down from the sticking point it will tend to thin out and may form a rift. Eventually, precipitation on the ice cap will be sufficient to force the ice to surge forward again.  This stick-slip mechanism will leave a visible record on the ice as a series of folds.  The ice being compressed in surges will tend to be composed of sections having some of the properties of laminates. In the opposite sense to tree-rings or ice-core layers, wide gaps between features, such as C-D and F -G in the image below, probably indicate slip delay due to low precipitation. 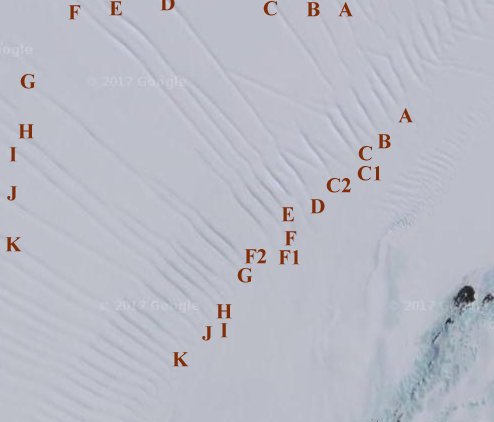 In the image above, two galcier streams feed the Amery Ice Shelf.  They appear to be subject to stick-slip motion and show a tendency to fall in and out of step with each other.  At A, B and C the features are for the most part merged.  It appears that an 'icequake' shock transmitted through the ice by the slip-surge of one glacier jolts the other into slipping forward, provided that it is primed to slip.  It is more likely that the wider stream will jolt the smaller than vice versa.  Features at C1, C2, F1, F2 show that the surge of the smaller glacier did not trigger a surge in the larger one.

When a laminated material is forced into a curve it tends to crack radially from the outside of the curve, splitting the laminate.  The split laminate then tends to straighten out to some degree, leaving a Y shaped crack.  The same effect can be seen in the bark of many tree species.  Zigzag cracks can also be seen in some tree stumps or in log ends where cracks alternately run across or along the rings.

Another delamination mechanism may be called 'wedging'.  It is often seen in sandstone that water seeping between the laminates will expand on freezing in winter and will force off fragments of stone.  When water in a rift freezes it will tend to expand and widen the rift.  Debris falling into the rift will obstruct any force tending to close it.  Ice debris may be flushed further into a rift if it opens even a little, giving a 'ratcheting' effect to rift widening.  A berg which is large in comparison with a rift may be so affected by wind and current that it acts as a giant wedge, adding its force to the other forces which cause or promote rifting.  In the image above of the Amery zigzags an ice island is clearly seen to be wedging itself into the rift.  The image below, circa 2009,  from Google maps shows two ice islands A and B.  Ice island B is the most likely source for the fragment which became wedged in the rift at C. 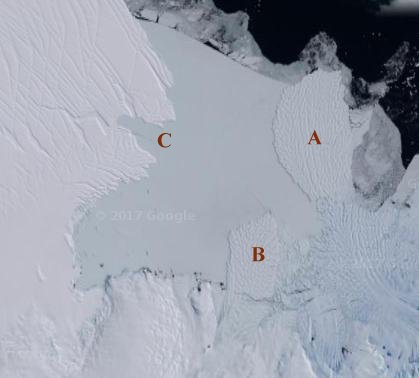 The images below show the appearance of the Amery Ice Shelf over a period of years.  The sources of these images are given in the links at the foot of this article. 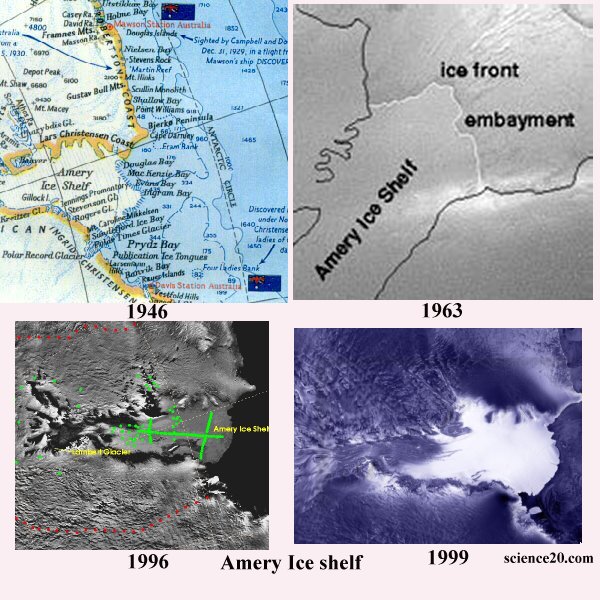 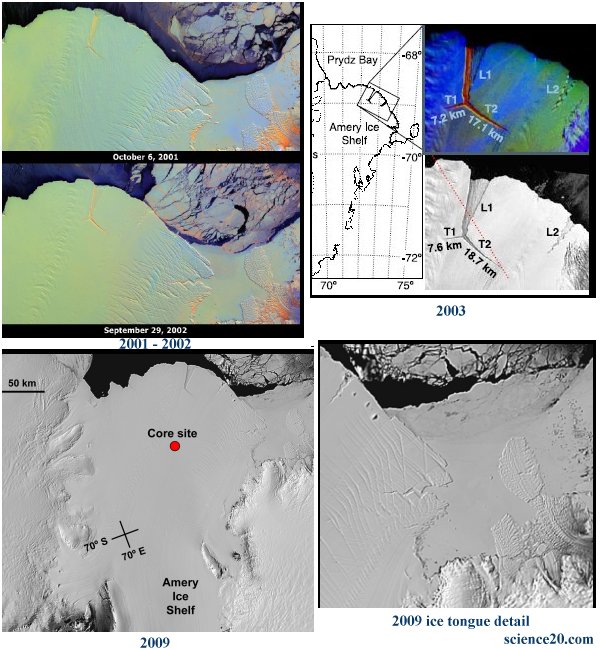 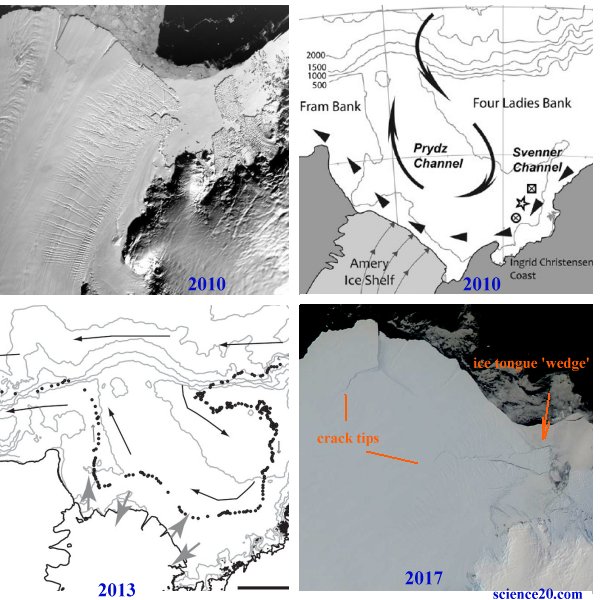 In order to evaluate realistically the evolution of ice shelves under different climate change scenarios, we need to determine how these scenarios might influence the production rate of icebergs. A precursor to calving is the initiation and subsequent propagation of rifts which penetrate the entire ice shelf thickness.  Such ‘‘through-cutting’’ rifts propagate and widen, until they eventually become detachment boundaries for tabular bergs. Despite the important role of rift formation and propagation in the calving process, we know very little about the mechanisms involved. This ignorance highlights a need to describe and incorporate fracture mechanics properly into models of ice shelf dynamics [Rist et al., 2002;Hammann and Sandhager, 2005].