Tommaso Dorigo
In two weeks I will be talking at TEDx Flanders, in the magnificent theatre of the Flemish Opera of Antwerp, Belgium. I can't wait, of course, and I have prepared a presentation which is hopefully going to be digestible, but I would hope enjoyable, for the thousand total outsiders who will listen to it in-between a couple dozen other extremely interesting performances and talks. The program is indeed quite diverse and exciting, and the event will last the full day of Saturday, Sept. 24th.

Adding spice to the whole thing, I will not be alone on stage, but I will be sharing it with my friend, blogging and physicist colleague Peter Woit. We'll try to tell a two-voice tale about the research going on at CERN, and in particular the search for the Higgs boson. Uncontrolled voices say we will even be spreading rumours about new discoveries... We are both known to be good at that.

The program recites in the abstract:

What is CERN doing? Can we laymen understand something about elementary particles? Did we find the Higgs boson?

but you have to follow a link on top (speakers) and then to our names to read more about it:

We are at a dramatic moment in the history of physics, as the huge Large Hadron Collider experiment has begun its successful operation near Geneva. Around the time of TEDxFlanders, sufficient data should have been collected to allow preliminary answers to a central question that has occupied physicists since the 1970s: what causes particles to get their mass?  Is it something known as the “Higgs mechanism”?   Experimentalist Tommaso Dorigo and theorist Peter Woit will explain what this is all about, and provide an up-to-the-minute look at the news from Geneva.

One thing that got me excited about is that the stage is super-high-tech. Just to give you an idea, there will be a huge LCD screen on our back, plus a second humongous one behind it, where I plan to set up a slideshow of event displays from CMS ad ATLAS. The stage is really large, and wherever I will go I will be followed by spotlights which will change intensity, color, and hue depending on several parameters. I won't have to turn to the screen, since I will have five monitors in front of me, hidden from the audience, showing what's behind my back, what the cameras show, and whatever else I feel like wanting to be there - probably my own script.

As customary here, I am going to provide you with some anticipations about my talk. Here is an excerpt:

"Imagine you're traveling on the highway, carrying a case of whiskey in the trunk, when you're hit by a truck coming from the opposite direction. Bang. Not much remains of what was in the car, but those who'll come and pick up the remains might be able to tell whether it was Jack Daniels or Glenfiddich you were carrying around!
That's what the Large Hadron Collider experiments do: they examine the remains of those powerful collisions, enabling us to see inside the proton. Like the scent of whiskey, the produced debris of a proton collision tells the tale."

I thought I would also paste here a slide or two, but this time the slides are text-free, unlike in the typical conference talks I put together. So let me just show one event display from CMS, like those which will be running in the background screen. The event display is the "leitmotif" of the presentation (I should explain that "leitmotif" is the theme of the whole TEDx event).

By the way, what could this event represent ? Answer in the comments thread. 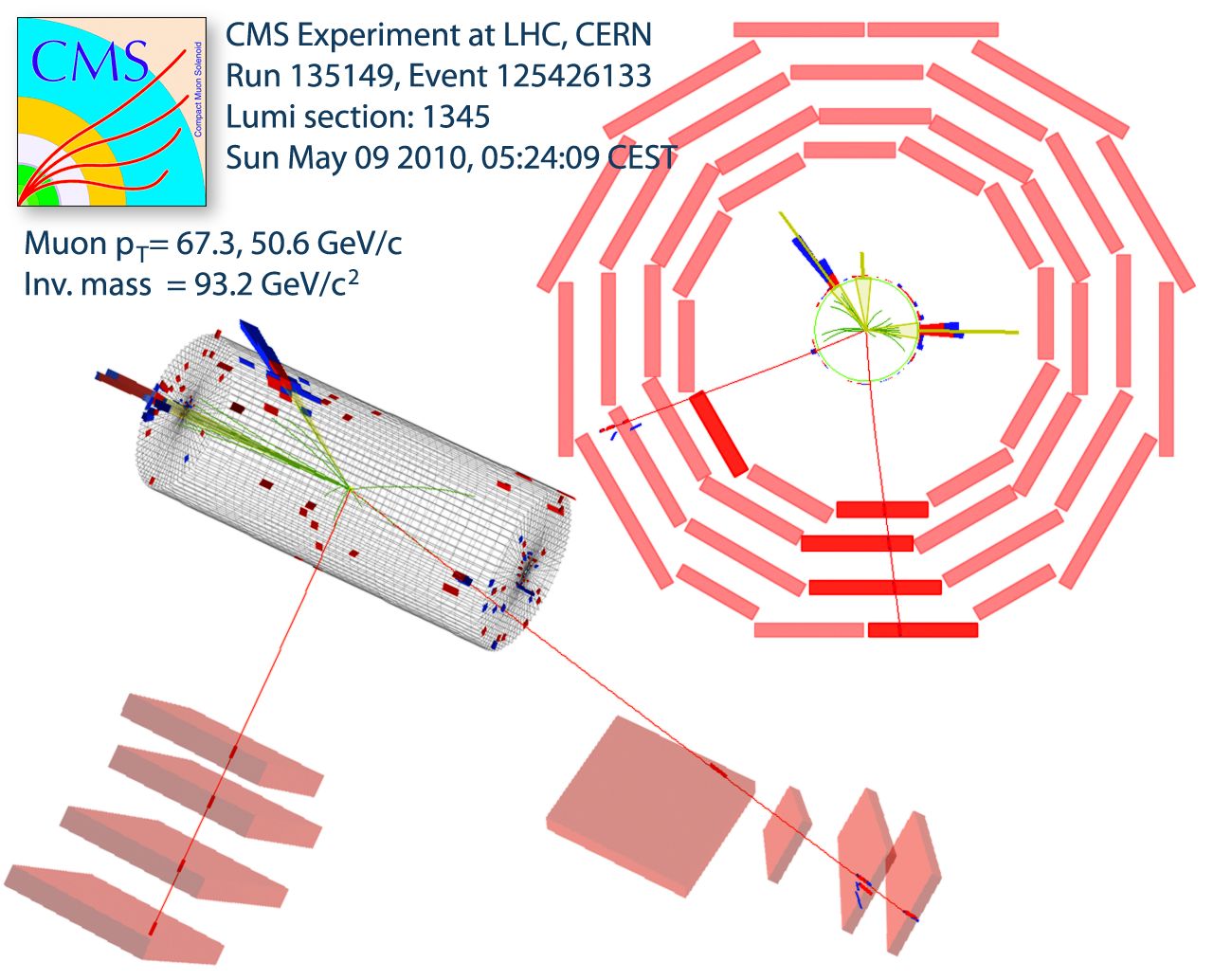