I can hardly recall other movies with just two characters, so this must clearly be a rare occurrence and one which shows that the movie treads in largely unexplored territory. Can people be entertained by one-man shows ? Well, yes, if the story is an extraordinary one. Tom Hanks does excellently in "Cast Away", for instance. "Gravity" is similar in the use of the loneliness of the protagonist and the large odds against her survival. But it is more radical in the total absence of other human figures, except Clooney of course.

Besides for being a one-(wo)man-show, and more interesting for this blog, the movie is also a singleton in its use of the laws of Physics. Scientific accuracy is never sacrificed for the sake of entertainment - there is no need to do so, as the dynamics of bodies orbiting the Earth is quite fun by itself. The audience is forced to reckon with the fact that inertial motion in the absence of friction creates difficult conditions to astronauts, and with the fact that an isolated system has no way of modifying its angular momentum. The collision of orbiting debris with the space station is, of course, totally silent.

The third law of dynamics becomes apparent as Bullock uses a fire extinguisher to navigate through space. All these ingredients are spectacular even if not mysterious or extreme: the director succeeds in showing how entertainment can be provided with ordinary means, if the situation is extraordinary. 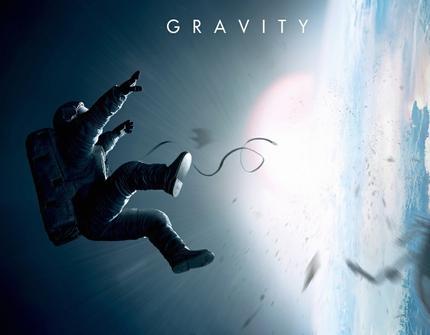 Scientific accuracy is in jeopardy during the movie only once, as Clooney opens the landing module, abruptly bringing the inside to zero pressure, while Bullock is not wearing a pressurized space suit. I ached when I saw the scene, and was very relieved when it became manifest that it was a dream. Funny how scientists spoils the movie to themselves - rather than being saddened by the fact that it is a dream (implying that Clooney is, in fact, dead) my attention was stuck on the scientific detail that a body exposed to zero pressure suffers serious damage in the matter of just a few seconds. [Post-scriptum: in the thread below some readers noted that the situation is not as serious as I initially depicted it here. Human beings in good health are predicted to remain conscious for 10 seconds at zero pressure, unless the change in pressure is not too fast].

All in all, maybe the only "implausible" detail is the presence of this debris in collision course with every orbiting station around. In truth, the Earth is indeed circled by a lot of satellites, old and new, and debris of all kinds, but the kind of "chain reaction" we are asked to believe has occurred as a result of a single missile hit is rather hard to buy. But it is the only concession we are asked to make, so even those of us who have a perennially running "scientific inaccuracy buster" co-processor in the back of our mind can sit back and enjoy the story.

One last note I have to make concerns the title of the movie. "Gravity" is not really what this should have been called: gravity is, in fact, irrelevant to 99% of the dynamics that keeps the story going. That is only inertial motion and the three laws of Newton. Almost nowhere in the equations governing the motion of the bodies you see in the movie is a=g: gravitation is only relevant during the final re-entry of the module in the Earth's atmosphere.

But I guess that "Inertia" was a less attractive title for the movie!