Hank Campbell
Two weeks ago, Galveston born and raised George P. Mitchell passed away at age 94. He was well-known as a Texas oil billionaire but less well-known as a keen advocate of science.

He not only funded basic research, he was a driving force in getting President Ronald Reagan to support the Superconducting Super Collider, a futuristic high-energy machine killed off by Congress and President Clinton in 1993, and he donated the land for Texas A  &  M University at Galveston. 1,200 people showed up yesterday to celebrate his life.

His interest in basic research, including advocacy for the SSC and the Alpha Magnetic Spectrometer, was little known outside Texas, he was better known nationally as a former oil wildcatter who pursued fracking when peers in industry and scientists in government said it would never be viable. And so he did what large companies had been trying to do since the 1940s - extract natural gas from shale rock formations safely and economically. Using 3-D seismic data, his team came up with a mixture of sand and water that safely released gas from the shale, something government scientists in the U.S. Department of Energy were unable to do.  Even the Board of Directors at his company had kept telling him not to pursue it. But it was his for-profit company and so he did pursue it - the sunk costs of research were so high they didn't even break even until after the 36th natural gas site was developed. So much for the notion that greedy Big Oil only cares about short-term profits.

“The science wasn’t there to assist them,” Dan Steward, who led teams at Mitchell Energy  &  Development, told The Energy Fix, but Mitchell believed it was the future. Its success made him a billionaire but Mitchell took credit for none of it beyond being a believer - he instead deferred to geologists, chemists and engineers for making hydraulic fracturing work. And he then paid science back in many ways.

Texas A& M University physicist Peter McIntyre tells of how Mitchell quietly saved the Alpha Magnetic Spectrometer. Mitchell also bankrolled development of technology for high energy accelerators and was responsible for using that same technology to make a more powerful magnet for magnetic resonance spectroscopy in biomedicine, a key tool in deciphering the structure of proteins for cancer research.

He created the Mitchell Institute for Fundamental Physics and Astronomy at Texas A  &  M, which is why Professor Stephen Hawking euologized him:

"George P Mitchell was a remarkable individual who combined vision with wisdom and persistence. Through sheer hard work and dedication, he leaves behind an extraordinary legacy. It can be said of very few people that they changed the world—but George Mitchell is among those few.

"I first met George in 2002 when Chris Pope flew him to see me in Pasadena to persuade him to support physics at Texas A&M University, not that he needed much persuading.

"George had been a strong backer of the superconducting super+collider, which would have been more powerful and earlier than the LHC but was cancelled half-built.

"After our meeting, George got things moving and when I visited Texas A&M the following year, there was already the George and Cynthia Mitchell Center for Fundamental Physics which has since moved to splendid new premises. Through George's support, Texas A&M has become a leading university for research into physics and cosmology.

"I am proud to remember him as a friend. I had several happy visits to his beautiful nature reserve in Texas where George did me and my colleagues the honor of allowing us to hold a physics conference. While none of us can match George's ingenuity in geophysical discovery, I am happy to say that I still managed to beat him in wheelchair racing, even if it was only by a narrow margin.

"Loved, admired and respected, through his work in energy production, his humanitarian generosity, his academic curiosity and passion for inspiration and his wonderful, warm family, George P Mitchell will live on in the hearts and minds of all who knew him." 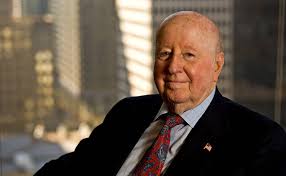 That's quite a legacy. If we want to be happy about CO2 emissions from energy plummeting, putting us back on a path where anthropogenic climate change becomes a distant memory, and Texas still being a world leader in physics today, we can thank a goat-farming immigrant. As Jim Pierobon at The Energy Collective put it, "you done good, real good."