Hank Campbell
In Science Left Behind I wrote a segment about a national discrimination issue that was eroding not only science, but the very notion of fairness in our culture.

No, it wasn't the lack of Republicans in faculty jobs at universities. It was instead that, for decades, schools had been using skin color to routinely impede the chances for the best students to get admitted. They were using racial profiling to skew who got to attend.

Few colleges bucked the Federally mandated discrimination and refused to use racial profiling for admissions. Ironically, one of them was Hillsdale College, among the first colleges to allow minorities to attend. They advocated for racial equality in the early 1800s, long before it was cool. But in the 1970s, the Federal government told them they had to start counting by skin color or they would get no Federal money. It reached the Supreme Court in 1984, which agreed that racial checkboxes were a reasonable demand in return for taxpayer funding. So Hillsdale walked away from government student loans and told students who were accepted they would replace it with private donations.

30 years later. the Supreme Court has declared an end to mandated affirmative action for colleges.

Why did affirmative action in admissions ever happen? Obviously for the best of reasons. Plenty of colleges were not allowing in students based on merit. Racism had been a longstanding policy worldwide, not just against blacks or Latinos, but against Chinese, Jews, the Irish, you name it, racism happened any time someone different moved in. Tolerance is actually a modern sociological invention. Fixing discrimination takes time and work. The Shackled Man Theory says that if someone is wearing shackles in a race, simply removing the shackles once everyone else is far ahead is not fairness, they are too far behind to compete. That is so.

But for how many generations should we shackle some students, including much smaller minorities, who lack the voting clout of black people or Latinos, before it becomes an entitlement?

In the book, I noted the seedy underbelly of college admissions discrimination - Asian families had long recommended that any Asian child with an American last name put White on their college application - because whites were discriminated against less than Asians.  An Asian student needed a 1550 SAT score to have the same chance of getting into a school as a black student with a score of 1100. Whites only needed 1400, so Asians would deny their heritage to combat prejudice against them when it came to colleges.

At the time I wrote that section of Science Left Behind, the Supreme Court case had not yet heard what I believed would be the definitive challenge - a student named Abigail Fisher was denied admission into the The University of Texas at Austin because of a 'secret racial sauce' admissions officers used. The administrators in Austin couldn't deny using race, so they did their best to plead the alternative, arguing both that they did not discriminate and that secret racial selection was necessary to insure diversity.(1) 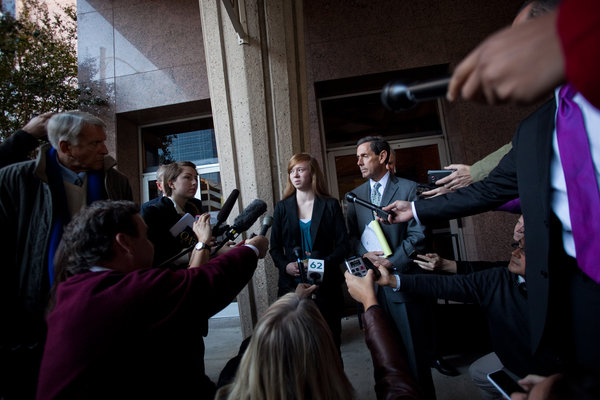 Abigail Fisher after a hearing at the Fifth Circuit Court of Appeals in November. Credit and link: Drew Anthony Smith for The New York Times

Some states had already begun to (at least technically) (2) eliminate race as a trump card in admissions but the Federal government was persistently arguing against them, apparently believing that America was still too racist and young people needed to be reminded of that when they apply to college.

This was in defiance of facts. In states that stopped using race, diversity did not go down but discrimination did. Only in the elite schools, like Berkeley and UCLA, where some students were only admitted because of race, did demographics change.  Laws against discrimination work, having another layer of regulations mandating favored races was no longer needed. And society has progressed also.

In June of last year, the Supreme Court did not agree with those academics in Austin, but did not overturn all of the states with preferences for admissions - they told the  the Fifth Circuit Court of Appeals to look again at UT Austin's race-based admissions policies. Today, a new decision has knocked down another pillar of discrimination. A voter-approved initiative banning racial preferences in Michigan had been tied up in court since 2006 but now the Supreme Court has upheld it. California, Florida, Washington, Arizona, Nebraska, Oklahoma and New Hampshire have similar bans on using race and with the decision today, other states may seek to do the same.

It's only bizarre political framing that is going to insist that this institutionalized discrimination is "affirmative" and an essential component in college admissions, or that higher education in America - with a liberal representation far out of the mainstream - is gleefully looking for ways to create separate water fountains for every minority except Chinese and Indian people. It is time to get rid of this 20th century anachronism the same way we got rid of forced busing.

Justice Sonia Sotomayor disagrees with the majority and insists minority enrollment in Michigan will decline without Federal mandates. Like, she claims, happened in California. "The numbers do not lie," she said. No, but statistics are spun, in this case by her implying that if mandatory race admissions don't happen and some minority enrollment declines at the top schools in the world, it must be intolerance.

Yes, admissions officers at Berkeley and UCLA, Justice Sotomayor thinks you are racist in 2014 and will continue to be unless the federal government stops you.

(1) Pleading the alternative sounds counter-intuitive to most people, who prefer an 'it is or it isn't' world when it comes to factual events. But should you ever steal a cow, a judge is not going to be surprised at all if you simultaneously argue that you never stole the cow, you gave the cow back, and it was your cow in the first place.

(2) California banned it officially. Unofficially, the difference in SAT scores among Asians/Whites/Blacks remained the same as states that used racial profiling. Coincidence? Sure, if that helps.
Science 2.0
More Articles All Articles
About