Danna
Staaf
Autumn has arrived, bringing firework foliage, delicious squash, and, at least in the Pacific Northwest, an invasion of squid.

Humboldt or jumbo squid, sometimes mistakenly called giant squid, are grabbing fishing lures and washing up on beaches from Oregon to British Columbia. As a marine biologist fielding questions from reporters and citizens, my heart always sinks when I hear the inevitable query--delivered with a mixture of horror and fascination--"They eat people, right?"

I've decided that Humboldt squid really need better PR. Ten years ago, they weren't on anyone's radar. Today, they're accused of eating fishermen and divers and branded a dangerously invasive species from California to Canada. Talk about giving the new kid a hard time!

Well, okay, they are invasive1. And they are voracious predators, so you might worry about getting devoured if you're a krill or a small fish. But if you're human, Humboldt squid pose no real peril to life and limb. Let me explain.

First of all, squid eat with their mouths.

More specifically, they eat with their beaks. The squid's beak is often compared to a parrot's, and the two do look similar, though the squid beak is simpler. Bird beaks are made of bone and keratin and nerves and blood vessels, whereas squid beaks are mostly just chitin (the invertebrate's keratin)2. Neither squid nor parrot has teeth, only a tongue. The squid tongue, or radula, is "toothed," but it's only a little rougher than a cat's tongue--not exactly a weapon to strike fear into the hearts of fish. A radula is toothed the way Velcro is toothed, and the squid uses it like we use our tongues: to scoop bites of food back toward the esophagus, where they can be swallowed. 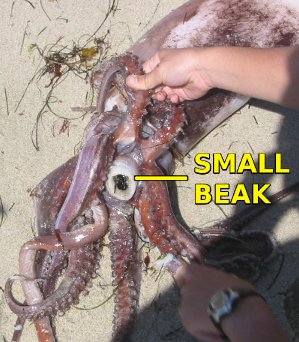 Curious about relative size, I just took a squid beak off my desk and put it to my lips. I'm five-foot-zero, and the beak's previous owner was a Humboldt squid of approximately the same length. Our mouths turn out to be just as comparable--both a couple of inches in width. This is an important fact: a squid's mouth-to-body-size ratio is much more similar to a human's than, say, to a shark's.

Sharks, in case you hadn't noticed, have huge mouths. If mine were the same size relative to my body, it would be the width of my entire head! Fearsome as it is, though, the shark's mouth makes good biological sense, because it's very important--and not just for dining.

Neither sharks nor squid are indiscriminate killing machines. They are intelligent and curious, desirous of investigating the world around them. In this regard, the squid is much better equipped than the shark, with eight arms and two tentacles full of nerves and sensory structures. Divers report being harmlessly "explored" in this way by both octopuses and squid.

Poor sharks. They have no arms or tentacles. Their fins are great for swimming but useless for manipulating objects. They have no better tactile sensory structure than their mouth, so that's what they must use to investigate. A buoy can usually survive such oral exploration, but a surfer may suffer serious injury.

Though it leaves something to be desired as a tool of discovery, we must acknowledge that a big sharp mouth is really very good at eating. If a shark grabs its prey with a mouth like that, it gets a bite of food even if the whole animal gets away. Furthermore, the missing chunk may prevent it from going very far, so the shark can easily catch up and finish its meal. In fact, this is a common shark strategy--take a debilitating bite, then wait for the prey to weaken and die.

This strategy is completely out of squid reach, though, because they don't go after prey with their mouths. That beak is just too small, plus it's tucked away inside a tangle of arms and tentacles. Instead, they use these ten appendages for collecting food. The two tentacles are long and elastic, and the squid usually keeps them tucked out of sight, then shoots them out--bam!--to grab an unsuspecting fish. The tentacles bring the struggling fish in to the arms, which hold on and manipulate it so the beak can finally take a bite.

In the case of the Humboldt squid, each writhing appendage is lined with suckers, and each sucker has a tiny ring of teeth inside it. This has led to specious claims that Giant Squid With Forty Thousand Teeth Will Eat Your Babies, OMG!3

Next to the squid beak on my desk is a plastic Tupperware full of sucker rings, waiting for my next artistic impulse. In the past, I've coated them with clear nail polish and wired them into earrings, or twisting them onto a tiara for a co-worker's birthday. The aesthetic is somewhat predatory, but also surprisingly delicate.

Each ring would barely fit on the finger of an infant, and the "teeth" range from the length of a pinhead to microscopic. An armful of these sucker rings raking across your skin is like being scratched by a lot of very small cats. Ouch, but far from deadly. If you were a fish, the sucker teeth wouldn't even get under your scales. Their purpose, like the "toothed" tongue, is similar to Velcro, and consequently the arms and tentacles are very, very good at holding onto things.

So although Humboldt squid will happily devour all kinds of small krill, fish, and other squid4, they won't eat anything their own size or larger. Not unless people lend a hand, for example by catching a large squid on the end of a fishing line so other squid can nibble it at their leisure, or by cramming a lot of squid and tuna together in a net so the squid can chew on the tuna while they're all being dragged to the surface5.

Sharks, on the other hand, with their big mouths and bite-and-wait hunting strategy, do eat big things. They eat big marine mammals that look not unlike you. Hence the occasional attack on humans, and the reason I keep comparing squid to sharks. Sharks are the classic deadly marine predator--everyone knows they kill and eat people, right?

Well . . . not quite right. Sharks have been known to attack people, but few shark attacks are fatal, and even fewer end in any degree of consumption. When sharks do bite, they're generally disappointed to find the bony human isn't a nice blubbery seal. Death by shark is actually rarer than death by falling into holes in the sand. However, I couldn't claim that "Sharks don't kill and eat humans" because there is empirical evidence that they have--albeit infrequently.

Science is annoying that way, but it doesn't really matter, because I wouldn't want to give the impression that the ocean is a safe place. It isn't. Plenty of sea creatures can hurt you, including seemingly innocuous things like snails and seaweed, in addition to the big predators. Some of these creatures can even kill you. A very, very few could eat you, or at least part of you.

But, in all seriousness, probably not squid.

--
1. It bears noting that species invasions are generally faciliated by human activity. In the case of the Humboldt squid, no one's been convicted yet, but we have warrants for the arrest of both climate change and overfishing. (Zeidberg LD, Robison BR. 2007. PNAS)

2. Squid don't have bones at all, of course, which raises the interesting question of just how they operate that beak. We bony creatures move our bones with muscles that work against other bones, but squid just have muscles working against other muscles. Despite its compositional simplicity, the squid beak turns out to be a beautifully innovative solution to this problem. (Miserez A, Schneberk T, Sun C, Zok FW, Waite JH. 2008. Science)