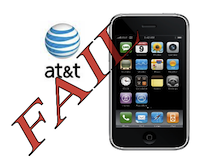 Some turns of events in the technology world are truly surprising.

Who knew that a couple of guys starting up Google would hit it as big as they did? Who imagined that Facebook or Twitter would turn into sensations? Who had any inkling about how successful the iPhone would be?

From the day it was announced, the iPhone was a pre-release sensation. One didn’t need one’s finger on the pulse of technology to see how popular it was going to be, and to predict that its popularity would go beyond even what Apple, despite its irrepressible optimism, expected when they announced it. And it didn’t take a Nobel laureate to guess that the crush would continue with each new version of the phone.

It seems, though, that the planners at AT&T’s wireless division had their collective finger somewhere decidedly far from anyone’s pulse. Their network is overwhelmed by the success of the iPhone,

“It’s so slow, it feels like I’m on a dial-up modem,” he said. Shazam, an application that identifies songs being played on the radio or TV, takes so long to load that the tune may be over by the time the app is ready to hear it. On numerous occasions, Mr. Sbicca says, he missed invitations to meet friends because his text messages had been delayed.

And picking up a cell signal in his apartment? “You hit the dial button and the phone just sits there, saying it’s connecting for 30 seconds,” he said.

Now, there’s no question that these devices put a tremendous load on the communication system. There’s no question that a lot of added infrastructure is needed in order to have enough capacity to support them. It’s clear that this is a big task, and an expensive one. And, perhaps most significantly, it takes time — more time than we’d like — to go through red tape and approvals to build new cellular towers, and whatnot, however fast they might want to add more. But...

None of this snuck up on AT&T. They should have been working on building their network up for this in the time between their deal with Apple and the announcement of the iPhone in January, 2007. Failing that, they should have started when they saw how much enthusiasm the announcement generated before the release of the first phone at the end of June, 2007. They should certainly have gone whole hog on it when they realized that every man, woman, and child within a two-day drive of an Apple store was camped out on the street for a week, hoping to buy three of them.

About a year after the first phone went on sale, the 3G version came out, in July, 2008. The new, updated 3GS came out this June, and there were more than 20 million iPhones out there before the 3GS release.

And AT&T’s network is not only not ready: it’s enormously, spectacularly not ready. It’s not even close to being ready any time soon. And this despite its promises to the contrary well over a year ago, before the first 3G iPhone was sold:

How fast will the new iPhone run on AT&T’s 3G network?

Plenty fast, according to promises made by AT&T mobility chief Ralph de la Vega at Morgan Stanley’s annual Communications Conference on Wednesday [14 May, 2008].

Throughput of 7.2 Mbps would put the 3G iPhone within spitting distance of Wi-Fi speeds, which typically run between 6.5 Mbps and 20 Mbps.

But de la Vega didn’t stop there. According to [AppleInsider’s Katie] Marsal, he told the Morgan Stanley audience that sometime in 2009 the company will transition to HSPA release 7, which could deliver speeds “exceeding 20 megabits per second.”

Such life-enhancing speeds might indeed be supported by their network, if only one could convince everyone else to shut their phones off. Otherwise....