Female Sexual Dysfunction, Knowing How To Ask For What Feels Good
By The Conversation | November 29th 2014 06:00 AM | Print | E-mail 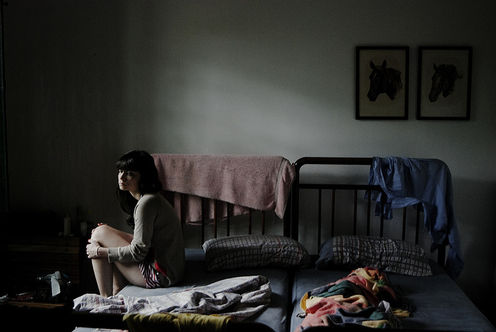 Our culture tells women there's something wrong with them if they don't orgasm. Gustavo Gomes/Flickr, CC BY-NC

A recently published Italian study suggesting women can only have clitoral, rather than vaginal, orgasms raises important questions about the medicalization of female sexuality and sexual dysfunction.

Many women would be happy to have an orgasm any old way, as University of Western Sydney researcher Jane Ussher points out, especially those who experience sexual difficulties.

It’s difficult to write about the topic of female sexuality without using negative language such as “female sexual dysfunction” or “failure” to orgasm.

Much of what has been written about the female orgasm is based on phallocentric assumptions, such as that women “should” have orgasms through penetrative sexual intercourse with men. And if they don’t achieve orgasm, there is something wrong with them.

Many women have absorbed these culturally acceptable views and the ongoing medicalisation of female sexuality continually reinforces them.

According to the latest psychiatrists' Diagnostic and Statistical Manual, the DSM-V, a woman suffers from “female orgasmic disorder” if she experiences a “marked delay in, marked infrequency of, or absence of orgasm or reduced intensity of orgasmic sensations” in 75-100% of situations of sexual intercourse. This must occur for at least six months and be accompanied by clinically significant distress.

Many women of my mother’s generation experienced such an absence of orgasms but without experiencing clinically significant distress because they had no real expectation of receiving sexual satisfaction from their partners. Their main concern was not to “fall” pregnant. The other most common female “dysfunction” is “female sexual interest/arousal dysfunction disorder”. Unlike “female orgasmic disorder”, this does at least have a male equivalent: “male hypo-active sexual desire disorder”.

Arousal difficulties are surprisingly common. A large-scale UK study found that 54% of women (compared with 35% of men) reported some form of sexual problem lasting for more than a month. The main problems these women experienced were a lack of interest in sex, an inability to orgasm, painful intercourse or trouble lubricating.

We know that sexual difficulties have a negative impact on women’s quality of life, their overall well-being and relationship satisfaction.

We also know that only one in three US women who report a distressing sexual problem have ever spoken to their doctors about their difficulties. This is mainly because of their embarrassment about discussing sexual topics with a physician. As a result, many clinicians lack experience in the diagnosis and treatment of female sexual difficulties.

The complexity of female sexuality

There is a myth propagated in the media of sexual spontaneity: satisfying sex happens spontaneously without the need for communication or negotiation and is mutually satisfying for both partners.

The reality is, of course, much more complicated. University of Pennsylvania researcher Maureen McHugh describes what women really want as:

It is disconcerting to consider that more than one in five women have experienced sexual coercion at some point in their lives. Hardly surprisingly, then, that some of these women experience some form of “sexual dysfunction” or difficulty later in life. The medical model tends to pathologise the complex sexual difficulties women experience, which often have relational, cultural and power dimensions. According to the DSM-V:

women differ in how important orgasm is to their sexual satisfaction. There may be marked sociocultural and generational differences in women’s “orgasmic ability”. (my emphasis)

A multinational study demonstrated that the reported prevalence of sexual problems does vary by region. For women, a lack of interest in sex and inability to reach orgasm were the most common sexual problems across the world regions, ranging from 26% to 43% and 18% to 41%, respectively.

We like to think women are empowered in Australia and yet we are under-represented in boardrooms and in parliament. Women in positions of power still suffer from sexism and misogyny, as then prime minister Julia Gillard so powerfully described in her misogyny speech. This resonated with women around the globe who, unfortunately, could relate to her experiences.

Is it any wonder, then, that women find it hard to negotiate their own sexual satisfaction?

Stanford University clinician and researcher Leah Millheiser has done much to promote female sexual health, particularly for women with cancer. Her Youtube video, What our mothers never taught us: changes in female sexual function throughout the lifespan, outlines a wide range of treatments available to women to improve their sexual functioning.

These treatments vary from drug therapy to sex therapy, with a great range in between including the use of vibrators, vaginal lubrication, pelvic floor exercises and so on. Despite using medical language, it is empowering for women to have easy access to the knowledge that they are not alone in experiencing sexual difficulties and that treatments are available.

The future is brighter

Sally Hunter, Lecturer, School of Rural Medicine at University of New England, is affiliated with the Psychotherapy and Counselling Federation of Australia.