NASA’s announcement of the discovery of a new extrasolar planet has been met with a lot of excitement.

But the truth is that it is impossible to judge whether it is similar to Earth with the few parameters we have – it might just as well resemble Venus, or something entirely different.

The planet, Kepler-452b, was detected by the Kepler telescope, which looks for small dips in a star’s brightness as planets pass across its surface. It is a method that measures the planet’s size, but not its mass. Conditions on Kepler-452b are therefore entirely estimated from just two data points: the planet’s size and the radiation it receives from its star.

Kepler-452b was found to be 60% larger than the Earth. It orbits a sun-like star once every 384.84 days. As a result, the planet receives a similar amount of radiation as we do from the sun; just 10% higher. This puts the Kepler-452b in the so-called “habitable zone”; a term that sounds excitingly promising for life, but is actually misleading. 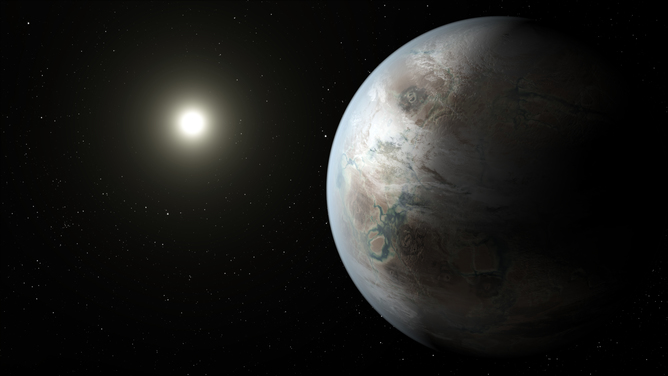 Looks familiar? Artist’s impression of the new exo-planet and its star.  NASA

Kepler-452b’s radius puts it on the brink of the divide between a rocky planet and a small Neptune. In the research paper that announced the discovery, the authors put the probability of the planet having a rocky surface about 50%-60%, so it is by no means sure.

Rocky planets like the Earth are made from iron, silicon, magnesium and carbon. While these ingredients are expected to be similar in other planetary systems, their relative quantities may be quite different. Variations would produce alternative planet interiors with a completely different geology.

For example, a planet made mostly out of carbon could have mantles made of diamond, meaning they would not move easily. This would bring plate tectonics to a screeching halt. Similarly, magnesium-rich planets may have thick crusts that are resilient to fractures. Both results would limit volcano activity that is thought to be essential for sustaining a long lasting atmosphere. Venus and Earth. Similar but oh so different. wikimedia

If Kepler-452b nevertheless has a similar composition to Earth, we run into another problem: gravity. Based on an Earth-like density, Kepler-452b would be five times more massive than our planet.

This would correspond to a stronger gravitational pull, capable of drawing in a thick atmosphere to create a potential runaway greenhouse effect, which means that the planet’s temperature continues to climb. This could be especially problematic as the increasing energy from its ageing sun is likely to be heating up the surface. Any water present on the planet’s surface would then boil away, leaving a super-Venus, rather than a super-Earth.

Another problem is that Kepler-452b is alone. As far as we know, there are no other planets in the same system. This is an issue because it was most likely our giant gas planets that helped direct water to Earth.

At our position from the sun, the dust grains that came together to form the Earth were too warm to contain ice. Instead, they produced a dry planet that later had its water most likely delivered by icy meteorites. These frozen seas formed in the colder outer solar system and were kicked towards Earth by Jupiter’s huge gravitational tug. No Jupiter analogue for Kepler-452b might mean no water and therefore, no recognizable life.

All these possibilities mean that even a planet exactly the same size as Earth, orbiting a star identical to our sun on an orbit that takes exactly one year might still be an utterly alien world. Conditions on a planet’s surface are dictated by a myriad of factors – including atmosphere, magnetic fields and planet interactions, which we currently have no way of measuring.

That does not mean that Kepler-452b is not a fantastic find. It has the longest year of any transiting planet of its size, holding the door open to finding more diverse planetary system. However, whether these discoveries are truly like Earth is a problem we cannot yet tackle.

Elizabeth Tasker is Assistant Professor at Hokkaido University. This article was originally published on The Conversation. Read the original article.