The dancer, actress, director and photographer Helene “Leni” Riefenstahl, who died in 2003, is a controversial character, largely because of the many propaganda movies she produced for the Nazis. So when it was recently announced that her estate would be handed over to a Berlin photography museum, historians of the period hoped to find some clarification about the extent of her involvement with the Nazi regime.

But these hopes are likely to be dashed. Riefenstahl, like many other celebrities of the Third Reich, was wise enough to destroy incriminating evidence at the end of World War II and created the image of herself as a naïve opportunist through interviews, autobiographies and – often enough – libel cases.

Riefenstahl’s cinematic legacy, particularly in sport journalism, is undeniable. This is why Germany’s most prolific feminist, Alice Schwarzer, has criticized historians and journalists who always bring up Riefenstahl’s past involvement with the Nazis, while supposedly being more lenient towards male Nazi celebrities.

But this is demonstrably untrue. Male artists, such as conductor Wilhelm Furtwängler, have been equally criticized for being co-opted by the Nazi regime. Schwarzer may have a point that other artists did not experience the same scrutiny after 1945. But her movies in the 1930s are prime examples of Nazi propaganda. Male filmmakers who produced such brazen propaganda on similar levels, however, got similar treatment.

Riefenstahl would later claim that Goebbels hated her and only Hitler’s patronage spared her from trouble. But this has never been substantially backed up by evidence. Riefenstahl’s acquaintance with Hitler goes back to 1932 when they met for the first time – after she wrote to him requesting a meeting.

Riefenstahl, who made a name for herself in the 1920s as an actress and then as a director in the early 1930s, became a star in the then popular genre of “mountain movies”. This was a topic dear to the Nazis and other nationalists in Weimar Germany who saw mountaineering – man’s struggle with nature – as both a symbol for Germany’s post-World War I struggle and the social-Darwinistic model of the survival of the fittest. Riefenstahl’s 1932 movie The Blue Light, which she directed and had the leading role in, reportedly became one of Hitler’s favorite movies. Its plot featured some of the main tropes of Nazi ideology: the perils of greed and materialism represented by sinister foreigners. 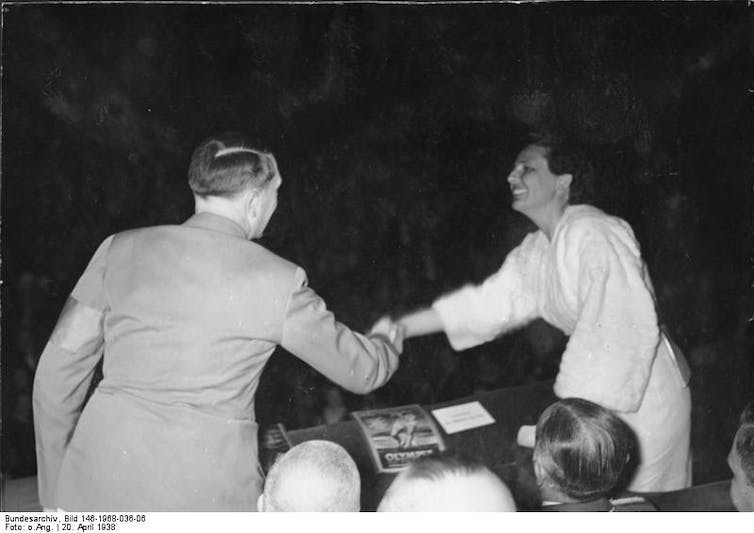 Leni Riefenstahl and Adolf Hitler in 1938 at the premiere of her first Olympia movie. Bundesarchiv/Wikimedia

After the Nazi Party came to power in January 1933, Riefenstahl turned her close links to Hitler into a profitable venture. Riefenstahl was commissioned to produce films on the annual Nazi Party rallies in Nuremberg 1933 and 1934, Victory of Faith and Triumph of the Will, respectively. The latter, in particular, is regarded as a cinematic milestone for using novel techniques in visual storytelling.

Riefenstahl would defend herself after the war by saying that these, like her two movies on the Berlin Olympics, were documentaries rather than propaganda movies – there is no narrator in the film and thus no explicitly stated political agenda. But when you see the films, there is really no need for a narrator. The opening sequence of Triumph of the Will is a plane carrying Hitler to Nuremberg, to be greeted by an enthusiastic crowd upon landing. This descent from the heavens echoes Nazi propaganda that Hitler was sent by providence to rescue Germany. As renowned art critic Susan Sontag wrote in 1975:

In Triumph of the Will, the document (the image) is no longer simply the record of reality; ‘reality’ has been constructed to serve the image.

Her two movies on the Olympic Games carry similar images. According to Riefenstahl, she only wanted to celebrate the aesthetics of athletic bodies – a claim reflected in the title of the second movie: Festival of Beauty. This, obviously, corresponds with the Nazis’ idea of purity and athleticism as signs of the virility and the superiority of the “Aryan” race.

As Sontag points out, Riefenstahl remained true to this ideal after the war, even when no longer focusing on white people. Her 1975 photo book on the Sudanese Nuba tribe also focused on the young, male, muscular body – promoting once more the ideal of a body image that cherishes the healthy and athletic form. In Sontag’s eyes, this focus on athleticism “can be seen as the third in Riefenstahl’s triptych of fascist visuals” – following in the footsteps of her movies on mountains and the Olympics. 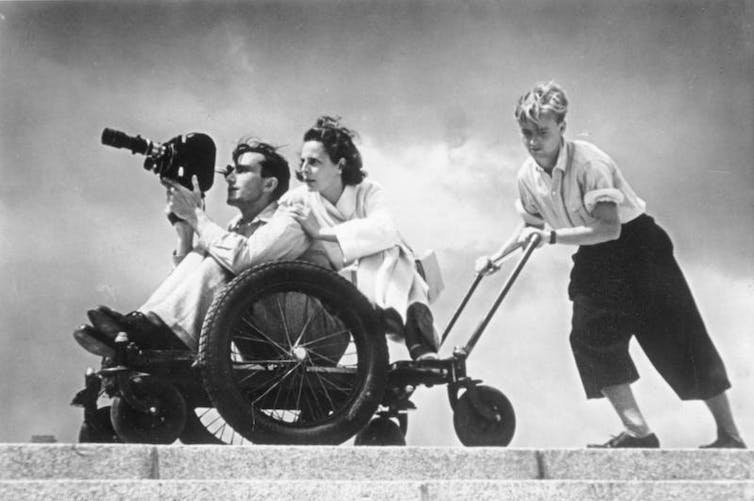 Riefenstahl filming at the 1936 Olympics.
Bundesarchiv/Wikimedia

Schwarzer’s attempt to somewhat exculpate Riefenstahl by arguing that she had to cooperate with the Nazis in order to make a career as a woman seems a bit facile. Riefenstahl and the Nazis found each other because they had similar ideas about the body, society and their representation. Riefenstahl may not have been a card-carrying Nazi in the sense of anti-Semitism or thirst for war – although her post-war excuse that she didn’t witness atrocities during her time as war correspondent has been debunked by historians. But her aesthetics and her understanding of community and mysticism went hand-in-glove with Nazi ideology.

Worryingly enough, as Sontag pointed out, these aesthetics were rehabilitated in the 1970s with the rise of the body-building movement. Celebrating the beauty of the athletic body became in vogue again, and also led to a rehabilitation of sorts for Riefenstahl.

Her contributions to film history are undeniable. Many techniques that are now seen as common in sports reporting were introduced and championed by her Olympia movies – such as cameras on dollies to follow the athletes on the track or underwater cameras in the swimming and diving competitions to give a perspective to viewers that even spectators in the stadium wouldn’t get.

So maybe Leni Riefenstahl is such a controversial figure because she is both a feminist, and a Nazi, icon.

By Alexander von Lünen, Senior Lecturer in Modern German History, University of Huddersfield. This article was originally published on The Conversation. Read the original article.