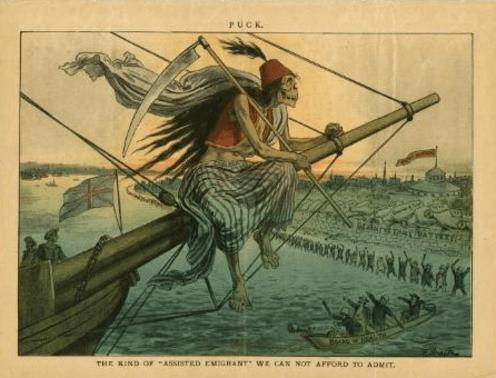 Fears of cholera coming shared a lot in common with fear of Ebola. Graetz 1883 © Historical Society of Pennsylvania

By Sally Sheard, University of Liverpool

On October 19 an inspector sent north from London to Sunderland reported a long-awaited arrival: the first British case of cholera.

It was 1831 and as part of a second pandemic cholera had again progressed from its Bengal heartland through Europe, before reaching the Baltic ports. It was only a matter of time. The British public, informed by newspaper reports, were acquainted with the symptoms: profuse watery diarrhoea, severe abdominal pain and often death within a matter of hours. In advance of its arrival in Russia thousands fled from the cities. In Poland it was killing one in two victims. And unlike today, where oral rehydration solution can prevent dehydration and shock, there was no effective treatment.

Cholera was (and is) caused by vibrio cholerae bacteria and spread by poor sanitation and unsafe drinking water. Although most people infected do not develop symptoms the bacteria remain present in feces for one to two weeks after infection and contamination can go on to infect others.

In 1831, the conditions in which the second pandemic spread (there were six in total between 1817 and 1923) were little different to those in which Ebola is traveling today. And indeed there are some interesting parallels – from the developing official response, to riots and suspicion of the medical community.

The government’s reaction as cholera made its way through Europe was to wait and see; although there was a greater degree of protection as an island then – with fewer travelers coming and going than we see today – a traditional quarantine policy would never have been 100% reliable. Screening ships’ passengers and crews would not, as is happening with Ebola, have picked up the newly infected, although this was considered. Quarantine was seen as a greater risk to economic prosperity than the disease was to human life.

As British cholera cases multiplied during 1832, the government and public responses changed. A temporary board of health was formed, but exerted little influence over local public health authorities.

Communities found their own solutions, for example setting up temporary hospitals, and in the process exposed usually hidden tensions: between the rich and the poor, between the educated and the illiterate.

By the summer there was civil unrest linked to cholera in London and other large towns and cities. Liverpool experienced eight major street riots in June 1832, triggered by rumors that doctors were deliberately infecting people with the disease to obtain bodies for anatomical dissection classes.

Doctors and volunteers were attacked by mobs when they tried to take cholera victims from their homes into the temporary hospitals. The wealthy complained that the hospitals were sited too close to their homes.

The authorities banned traditional wakes – in which the open coffin remained in the home for family and friends to visit. Instead there were hasty burials in communal graves, provoking further public unrest. Yet there were, as seen in the Ebola afflicted regions today, remarkable individuals, many unsung. Liverpool’s equivalent was Kitty Wilkinson, an ordinary woman who had the good fortune to have washing facilities (unusual for 19th-century working-class homes).

Cleanliness was seen as a possible cholera deterrent, and she selflessly allowed her neighbors to bring their clothes and bedding into her home. In 2012 Wilkinson became the first female to be honored with a statue in Liverpool’s St George’s Hall.

In Liverpool in 1832 there were 4,977 reported instances of cholera (about 3% of the population) and 1,523 deaths (a fatality rate of 31%), mainly among poorer families. William Henry Duncan, a doctor who was subsequently appointed as Britain’s first medical officer of health (in Liverpool in 1848), reported:

The vicious construction of the dwellings, insufficient supply of out-offices and of receptacles for refuse and excrements, the absence of drains, deficient sewerage and overcrowding of the population is tending to increase the mortality of Liverpool.

“Only” is such a callous word, but cholera, despite its fearsome reputation, did not kill as many as ever-present diseases such as tuberculosis, which were reliable, if ignored, indicators of the poverty in which the majority of the British working classes lived.

After each cholera epidemic in Britain in the 19th century, the boards of health were dissolved, restrictions on social gatherings relaxed, hospitals dismantled and official inspectors withdrawn. Squalor returned to the temporarily whitewashed streets and homes and the rich could again take their eyes off the poor.

Internationally, cholera continued to expose political, social and economic failures well into the 20th century. British India experienced cholera epidemics of around 200,000 deaths into the 1940s. But these rarely provoked a colonial or global response.

Cholera is of course still around today – there was the recent epidemic in Haiti – and it is endemic in many countries, causing up to 120,000 deaths each year from poor sanitation and unsafe drinking water.

Ebola takes its name from a river in Africa close to where it was first identified in 1976. It remains to be seen if we will venture to tackle what public health experts label as the “upstream” cause of the rapid spread of this frightening disease: by funding permanent, adequate programmes of sanitation and healthcare facilities in developing countries.

Sally Sheard, Reader in the History of Medicine at University of Liverpool, receives funding from The Wellcome Trust. She is affiliated with WaterAid.