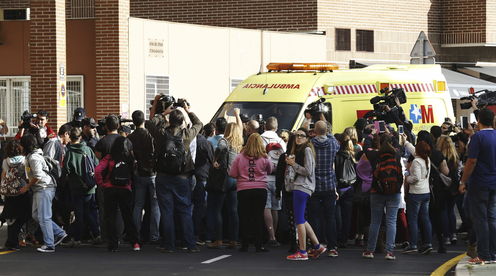 The Ebola epidemic in West Africa is the worst in recorded history. There have been in excess of 7,400 cases and 3,439 deaths, primarily in Liberia, Sierra Leone and Guinea. More recently, the spread of the deadly virus has extended across European borders to Spain, where five people are currently under quarantine, and a further 50 are being closely observed. The passage of the virus to Europe has been attributed to a nurse who contracted the virus from a Spanish missionary that was repatriated from West Africa.

The prospect of the Ebola virus spreading in Europe is a waking nightmare for public health officials. They will be anxious that the emergency preparedness plans that have been put in place for each country will be able to withstand, and contain, the spread of the infection. Almost inevitably, concerns are now being raised about how vulnerable we really are.

The poor healthcare infrastructure in the countries most affected has influenced the spread of the virus. When the hemorrhagic fever made its first appearance, it was made more difficult to initially contain because staff lacked training and awareness. In fact, at the very beginning, health authorities suspected the outbreak was Lassa fever rather than Ebola.

West African hospitals have also struggled to cope with waste disposal in the wake of the virus: as well as having to deal with dead bodies, containing infections requires proper handling of everything from bedsheets to used needles – and the resources to give each new patient sterile replacements. The virus is transmitted by contaminated body fluids such as blood, saliva, vomit and decomposition fluids coming into contact with another human orifice such as the mouth. It survives for at least a few hours outside the body, and sometimes longer, so there is ample time for it to spread.

It is extremely likely that there will soon be a greater number of Ebola patients arriving in the UK, despite all precautions to the contrary. But it is worth noting that over the summer, a UK hospital already treated a British nurse who contracted the disease while undertaking voluntary work in Africa.

Similarly the US has been dealing with Ebola patients for several months. Meanwhile, a Norwegian aid worker who contracted the disease in Sierra Leone was flown back to her native country to be treated. It is reassuring that the surveillance systems in both countries have so far effectively contained the infection.

Though many other Western countries will have to deal directly with Ebola in the coming months, the risks of a major widespread outbreak are much lower than in west Africa. European countries can rely on the co-ordinated and established protocols for emergency responses and containing infections that have already been used with other outbreaks, such as pandemic influenza.

Most important of all is making sure staff are trained to recognize symptoms: nausea, vomiting, diarrhea, red or bleeding eyes, weight loss, stomach pain and a raised rash. Admittedly this is not foolproof, as reports that the Spanish sufferer was sent home several times undiagnosed would suggest, but it makes a big difference all the same.

Suspected sufferers will then be isolated until they are diagnosed, and healthcare staff will most likely handle them wearing body suits, masks and goggles. If they are diagnosed with Ebola, they will remain isolated, receiving plenty of water and transfusions. Apart from experimental treatments, more of which in a moment, the only drugs being used at present are ones for maintaining blood pressure. Patients receiving this sort of supportive treatment do spontaneously recover. One positive about the Ebola virus is that it is not airborne. Unlike a virus like pandemic influenza, this means it can’t be transmitted by people spreading infected droplets by coughing or sneezing. It is thought theoretically possible that this could change, though.

The prospect of it mutating to become transmissible through air, enabling it to spread much more aggressively, is the key concern at the moment.

While this certainly seems to be a real possibility, it is worth looking at what has happened with H5N1 avian influenza (“bird flu”). This highly contagious virus is relatively common in birds in Asia. But despite numerous human infections over the past 15-20 years, it has never mutated to spread through the air.

There have also been positive reports about the potential of the combination-drug ZMapp to treat the infection. It is an antibody cocktail that can bind to the Ebola virus, although it is much too early to assess effectiveness. Countries who stockpile ZMapp or similar therapeutics should be better placed to halt the infection if the worst happens. The UK’s National Institute for Health Research is also moving quickly to trial an experimental Ebola vaccine in humans.

But until these efforts come to fruition, the most effective ways of preventing the virus from spreading further are infection surveillance, strict hygiene and clear control measures for contaminated fluids. We have been fortunate not to have had to deal with an Ebola outbreak on a worldwide scale before. But the time has unfortunately come to mount an effective international response.

Peter Barlow, Reader in Immunology and Infection at Edinburgh Napier University, does not work for, consult to, own shares in or receive funding from any company or organization that would benefit from this article, and has no relevant affiliations.