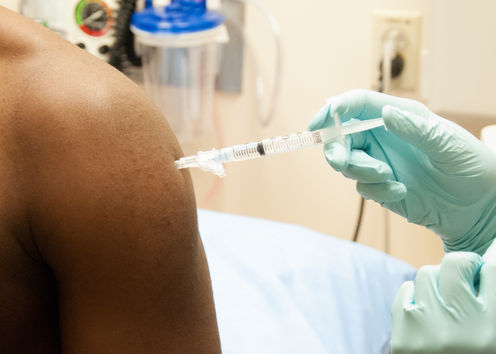 By Connor Bamford, University of Glasgow

The world has been warned that the current Ebola epidemic may not end without the use of a vaccine – and no licensed vaccines exist yet. That may soon change, because scientists are making swift progress.

This week, 800 vials of an experimental vaccine are being shipped to west Africa from Canada. The hope is that, despite being an experimental, unlicensed vaccine, it will help prevent the spread of the disease, which has already infected 9,000 people, killing at least half of them.

Vaccines have been a key part of public health strategy against infectious diseases. That is how smallpox was eliminated and how polio and measles have been brought under control.

Vaccines contain a weakened, or attenuated, version of the microbe, or some molecular part of it. These parts, or “antigens” as they are called, are recognized by your immune system, which can then make long-lived antibodies and virus-specific T-cells to fight off that infection. Vaccination mimics the natural process where immunity is developed through adaptation, without the risky exposure to disease-causing microbes. This prevents infection and subsequent disease when you are exposed for real, in the coming weeks, months and years.

Although this may sound easy, effective vaccines are notoriously difficult to make. We currently lack licensed vaccines for many common human infections, such as those caused by respiratory syncytial virus (RSV) and hepatitis C virus. In the current Ebola outbreak, the success of the implemented public health interventions, such as rapid diagnosis, quarantine and better care, are limited due to the sheer number of cases and lack of infrastructure in the affected countries.

Vaccination could play an important role in containing an outbreak of Ebola by acting as a preventive measure, halting the virus from spreading to other populations, nearby, thus facilitating a focused response.

A decade in development

The Ebola vaccine that is being shipped has been in development for more than a decade by researchers in Canada and the US, and it is known as VSV-EBOV (vesicular stomatitis virus – ebolavirus). This vaccine is a genetically engineered virus, based on a strain of the animal virus, VSV, a relative of the rabies virus, that has been altered to also make an important Ebola antigen. These antigens provide the opportunity for your body to mount its adaptive immune response, without having to be exposed to wild ebolavirus.

Crucially the VSV strain can replicate within the body – thus referred to as a “live” vaccine – but lacks the capacity to cause disease and be transmitted in humans. The Ebola antigen that is made is its glycoprotein (GP), a very important sugar-coated protein found on the surface of the virus, which allows it to enter human cells, replicate and ultimately, cause disease. When your body mounts an immune response against GP, through VSV-EBOV vaccination, antibodies made can bind strongly to it, preventing infection.

Show me the evidence

Ebola vaccine development is governed by the US Food and Drug Administration’s “animal efficacy rule”, which says that a license may be granted based on good safety and efficacy data in at least two animal models – in this case: mice, guinea pigs and non-human primates – and if the intervention is shown to be safe in a small number of humans. However, the vaccine currently remains unlicensed because standard clinical trials in humans are potentially unfeasible or unethical, given the deadly nature of the disease. Many support a relaxation on clinical trials of Ebola treatments during the outbreak to help contain its spread.

VSV-EBOV has been tested, extensively, in animal models. VSV-based Ebola vaccines are one of the most safe and effective vaccines in primate models, which are considered as the “gold standard” in pre-clinical animal testing.

Vaccination was 100% effective in primates when infected with wild ebolavirus four weeks after immunization. A relatively small dose is required and its safety profile is very high, even in primates with weak immune systems.

VSV-EBOV works rapidly. It has been shown to work when administered less than one hour after infection, although protection was lower than exposure before infection. VSV-EBOV has even been administered safely in a human, following a laboratory accident in a high-containment lab. VSV-EBOV is therefore currently being tested in human clinical trials in 20 healthy volunteers in the US and the results are expected by the end of the year.

One tool in the box

VSV-EBOV is not the only vaccine – or treatment – for Ebola being tested. Of note are zMapp (a monoclonal antibody cocktail) and the chimpanzee adenovirus vaccine that is also meant to express Ebola GP. They are being actively pursued and both sound promising from the results of pre-clinical trials and tests in a few human volunteers.

The adenovirus vaccine is the most advanced in comparison with VSV-EBOV, but larger amounts of virus are required to create required immunity and the time required between vaccination and development of immunity is much longer than VSV-EBOV.

Although there is uncertainty about how the current VSV-EBOV shipment will be divided across the affected regions – or even who will get it first – the 800 vials are clearly not enough to contain this epidemic. Those producing the vaccine currently have even been “urged to transfer production” to a company with greater capacity.

It remains to be seen whether these experimental vaccines and treatments will help in the short term. Nonetheless, the case is clear that a rapid, effective and safe approach is needed. Translation of our knowledge into the clinic must keep pace with the science behind it, but not at the expense of the safety of vulnerable patients.

Connor Bamford, Post-doctoral Research Assistant at University of Glasgow, does not work for, consult to, own shares in or receive funding from any company or organization that would benefit from this article, and has no relevant affiliations.