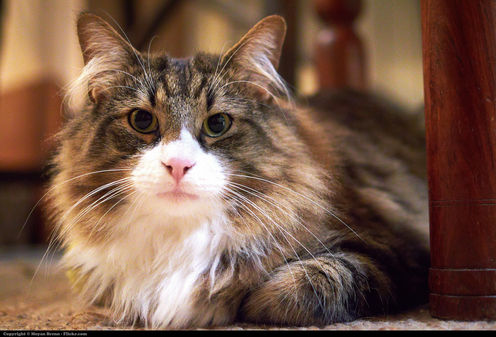 By Bryonie Scott, The Conversation

House cats are a great source of companionship for many people – 3 million cats are kept as pets in Australia. Now thanks to research published in the Proceedings of the National Academy of Science today, we understand the genetics behind some of the traits that make them such good pets, such as docility and affection.

While it seems cats have been in close contact with humans for around 9,000 years, it is only in the past 200 years or so that we have produced the domesticated breed we know today.

The research team behind today’s study, who were from various organizations including The Genome Institute, created the first complete domestic cat genome reference. To do this, they not only compared genomes of different mammals, such as cats, humans, cows and dogs, but they also compared the genomes of wild and domestic cats, and found the genes that make our household pets so friendly.

Domestication: it’s in their genes

Don Newgreen, head of the embryology laboratory at the Murdoch Childrens Research Institute, explained that when an animal is bred to affect its behavior, other physical attributes also change. This is known as domestication syndrome.

“Even though you are choosing for pleasant-natured animals, you get other traits as well,” Dr Newgreen said. “These include a lot of changes in pigmentation, set up of the face and head, length of the nose or teeth as well as behavioral changes like becoming placid and unaggressive.” The study found the main factor in changing the feline genome was originally food rewards. By supplying cats with food, the cats became more docile, and due to domestication syndrome, these changes in their behavior affected other traits, such as hair color, texture and pattern.

Bianca Haase, research fellow at The University of Sydney, said one of the main signs of cat domestication is the presence of fur patterns not found on wild cats.

“From other species, we know that white-spotting is a disadvantage [for wild cats],” Dr Haase explained. “There is no need for the [pet] animal to be camouflaged because they are protected, so an increase of white-spotting is a sign of domestication.” White markings are a sign of domestication. Netzanette/Flickr, CC BY-NC

When comparing the feline genome sequence to other mammals, the team found traits specific to carnivores. These included heightened sensory development, such as excellent night vision and a keen sense of smell.

Cats are different from other carnivores in that they are hyper-carnivorous. While humans would be in danger of heart disease from a rich diet of fatty foods, wild and domestic cats have evolved to be able to process saturated and polyunsaturated fatty acids.

Breeding cats for domestication is a relatively new practice, and there’s not been much time for new traits to evolve.

On top of this, humans don’t entirely control most cats' eating or breeding habits, meaning pet cats are really only semi-domesticated. In Dr Newgreen’s opinion, “cats are not really domesticated, just tame.”

So while cat domestication is modest compared to domestic dogs, today’s study showed that genetic changes in feline behavior and appearance will be retained as long as cats are kept as pets.

Bryonie Scott is an Editor at The Conversation. Interviewees are Don Newgreen, Embryologist at Murdoch Childrens Research Institute, and Bianca Haase, Research fellow at University of Sydney. This article was originally published on The Conversation. Read the original article.