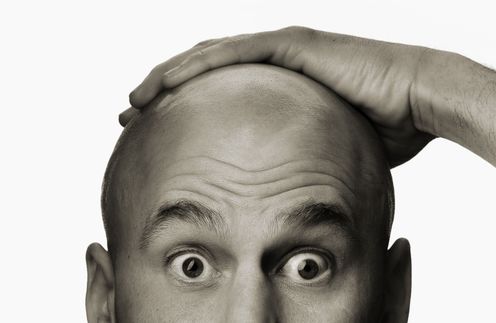 Shaved heads have come in and out of fashion over the past few decades, but some people don’t have the option of allowing their locks to grow.

Thankfully, for those who do suffer from hair loss, or alopecia, help may be at hand. Somewhat counter-intuitively an effective treatment for baldness may come from plucking a certain number of hairs – in a specific formation – from the scalp.

Hair follicles – the skin organ responsible for hair growth – contain stem cells that constantly divide, they are the driving force behind new hair growth. A healthy hair follicle produces about six inches of hair every year, but if the follicle stem cells malfunction and stop dividing, hair growth ceases and conditions such alopecia are observed.

Androgenic alopecia – or male pattern baldness – is the most common form of hair loss and will effect around two-thirds of men and one-third of women during their lifetime.

Our recent study, published in Cell, and completed on a mouse model, is unique because it not only studies the regeneration of a single hair follicle, but focuses on the regrowth of several follicles that had previously been effected by alopecia.

Recently, we accidentally discovered that regeneration could occur through a collective decision-making process. By plucking the correct number of hairs with a proper arrangement, up to five times more neighboring, unplucked resting hairs were activated to regrow. But if the number of plucked hairs was below a threshold, no hairs regenerated. This type of regeneration is an all-or-nothing process which is dependent on the signals produced by a fraction of hairs being plucked, and is an example of the process known as “quorum sensing”.

Quorum sensing can be thought of as a decision-making process which is dependent on certain criteria being met within a population. Signaling molecules are released by each stimulated component of the population, the more components that are stimulated the more signal molecules are released. As the elements in the system are able sense the number of signal molecules released by the population as a whole, they can also sense the degree of stimulation. When a certain threshold of stimulation is reached, a collective response from the components in the system will follow.

The process of quorum sensing has been used to describe bacteria cell-to-cell communication, where the expression of certain genes is coordinated between many bacteria in response to environmental factors such as an increase in the presence of bacterial toxins. Quorum sensing has also been used successfully to explain the behavior of social insects such as ants and honey bees for their collective decision-making.

But in reality, how does the population of hair follicles “cast and count its vote” in quorum sensing?. First, there is a stimulus – such as hair plucking, which stimulates follicle stem cells – to some, but not all, hair follicles. Second, the plucked hair sends out a signal to surrounding cells. Third, the group of cells gauges the intensity of signal from its surroundings.

Finally, a local decision is made within the population in an all-or-nothing fashion: if enough hairs have been plucked, mass hair regrowth will occur, but if not, there will be no response at all.

In the most simple cases of quorum sensing, the signal molecule spreads by diffusion from the secreting cell. But it was found that the signals being released by plucked hair follicles were traveling further than could be achieved by simple diffusion, suggesting that a something more complicated was involved.

This work shows that a quorum-sensing system can sense cell injury and use immune response to quantify how much damage has occurred. The stem cell population then disregards the stimulus if the minimum number of hairs has not been plucked, or responds to it with a full-scale regenerative response in many hair follicles when a threshold is reached.

This finding also is important in the field of regeneration medicine as a whole. We believe that the quorum-sensing behavior principle is likely to be present in the regeneration of tissue and organs beyond the skin. Using such efficient regenerative strategies opens a new window in treating hair loss as well as many other degenerative disorders.

By Cheng-Ming Chuong, Professor of Tissue Development and Regeneration at University of Southern California. This article was originally published on The Conversation. Read the original article.