The social stigma the campaigns create often fails to match the economic pain these campaigns inflict, making the costs of resisting them for governments like Russia, Syria and Iran tolerable in most cases.

Indeed, sanctions succeed less than a third of the time they are imposed, according to researchers at the nonpartisan Peterson Institute for International Economics, and divestment campaigns have an even less certain track record.

This isn’t to say that economic sanctions can never be effective, nor that they aren’t sometimes the best policy choice considering the alternatives.

There is a wide gulf, though, between simply imposing sanctions and investing in a sanctions effort that has a significant chance of succeeding. Creating effective sanctions regimes tends to be economically costly and politically challenging, and they require continued oversight. Similarly, launching an effective divestment campaign requires a considerable, sustained investment of time and effort on behalf of its advocates.

While most policymakers and activists would like their sanctioning and divestment campaigns to be more than just symbolic gestures, they should be realistic about what those tactics are capable of accomplishing and their associated costs.

Strategies of pain and stigma

Both operate via the logic that if targets can be made to feel enough economic pain or social stigma, they will make the desired concessions. Policymakers and activists can find their use attractive because they offer tangible and, in some cases, high-profile proof that “something” is being done to address a particular policy problem.

Unfortunately, these policies frequently fail to achieve their goals and can often be counter-productive. 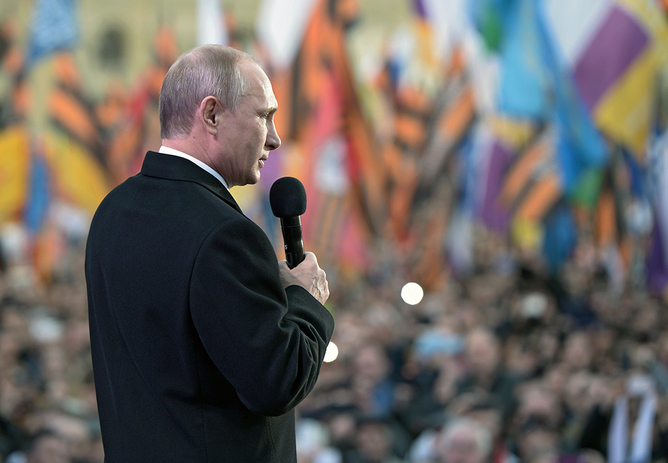 Overwhelming support in Russia for its annexation of Crimea show US and EU sanctions have failed to alter President Putin’s behavior. Reuters

There are several large impediments that prevent sanctions from being successful.

First, many of the goals that sanctions are intended to achieve relate to salient security and political issues, such as nonproliferation, democratization and conflict-related behavior.

In these cases the sanctions imposed are often far too weak to obtain their goals. The sanctions imposed by the US and European Union to reverse Russia’s annexation of Crimea are an example of this. Given President Vladimir Putin’s recent remarks, there’s little reason to think those sanctions will ever convince Russia to withdraw from Crimea.

This relates to the second challenge intrinsic to using sanctions: most financial- and trade-related sanctions hurt both those that impose them and their targets. States that use sanctions thus often have incentives to impose weaker sanctions than may be necessary to succeed to protect the interests of their own constituents.

For example, US sanctions against Iran and Cuba were relaxed in 2000 to allow agricultural and pharmaceutical exports to both countries. Similarly, the EU has been reluctant to impose harsh sanctions against Russia over the Ukraine issue.

The third challenge of using sanctions involves how other countries in the world respond. The point being that there are lucrative commercial opportunities for firms from other countries still willing to do business with sanctioned parties.

The more restrictive and widespread sanctioning efforts become, the more profitable it also becomes to covertly trade with the target. What separates sanctions-busting trade from drug-smuggling or prohibition-running is that most foreign governments not only consider such trade legal but actively encourage it. With a handshake, President Obama acknowledge the failure of more than a half century of sanctions. Reuters

As such, there are always third parties willing to help sanctioned states.

Until very recently, Iran easily survived more than three decades of US sanctions by relying on this type of trade. Countries like the United Arab Emirates have made enormous amounts of money playing host to sanction busters on Iran’s behalf. Only in the past five years have sanctioning efforts against Iran truly become painful as the result of the European Union joining in and stronger sanctions from the US. Even so, that ambitious campaign only brought Iran to the negotiating table – as opposed to bringing the country to its knees as some of the sanctions' advocates intended.

Beyond that, a punished state’s political supporters may also offer them foreign assistance to undercut the sanctions’ effectiveness.

Cuba, for example, used the generous aid packages from the Soviet Union and Venezuela under Hugo Chávez to endure more than a half-century of US sanctions. President Obama’s efforts to pare back the embargo is a tacit admission that those sanctions failed. Indeed, when pieces from the CATO Institute, Brookings Institution and The Economist all arrive at the same conclusion – that the sanctions against Cuba failed and maintaining them is counter-productive – it’s amazing that it took so long for US leaders to change tack. Ending apartheid is the poster child of divestment proponents, but domestic political pressure was the primary reason behind the change. Reuters

While some divestment campaigns seek to influence government bodies, like pension-funds, they generally aim to encourage citizens and companies to voluntarily stop doing business with a target country. Notable divestment campaigns have been launched against states such as South Africa, Israel and Sudan.

Other than “naming and shaming,” activists have little recourse in punishing actors who fail to participate. These campaigns may discourage some trade or investment in a target country, but replacement partners can often readily be found.

In the case of the US-based divestment campaign against the Sudanese government over the genocide in Darfur, activists had no leverage in dissuading Sudan’s East Asian trading partners from continuing to do business with it.

Even in the case of the divestment campaign against the apartheid government of South Africa, which eventually gave up power, research has shown that the divestment campaign had little economic impact on the country. While the sanctions imposed in the latter part of the 1980s likely contributed to the apartheid regime’s fall, domestic political pressure was the main catalyst.

Not only are sanctions and divestment campaigns frequently ineffective, they also can be counterproductive.

Sanctions encourage government corruption and the development of transnational organized crime. For a state like Russia, sanctioning its government has likely contributed to making many of the problems it was previously criticized for such as corruption, corrosion of democratic institutions and a lack of media freedom) even worse.

Divestment can also be blamed for impoverishing citizens who may not be able to influence their governments’ policies or even harming the populations that the campaigns are designed to help.

They can also drive multinational companies to simply pull out of targeted countries rather than encouraging them to lobby for positive reforms. Problematically, many of the adverse consequences of sanctions and divestment campaigns are difficult to predict.

Economic sanctions and divestment offer policymakers and activists a high-profile way to take a stand and “do something” about international problems they perceive.

Unfortunately, however, sanctions and divestment campaigns can often end up doing more harm than good. Policymakers and activists should carefully weigh the potential costs of employing these tactics before they advocate their use.

By Bryan R. Early University at Albany, State University of New York. This article was originally published on The Conversation. Read the original article.