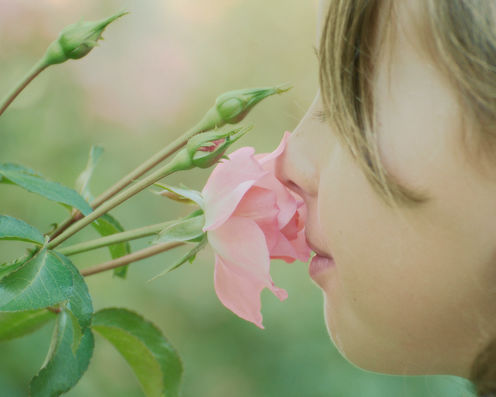 Humans can discriminate tens of thousands of odors. While we may take our sense of smell for granted, it adds immeasurably to our quality of life: the aroma of freshly brewed coffee; the invigorating smell of an ocean breeze or a field of wildflowers; the fragrance of a lover or the natural smell of a baby.

Our olfactory sense also warns us when milk turns rancid, when a baby’s diaper needs changing and when there’s a gas leak. In animals, the sense of smell is essential for detection of predators and other dangers, food sources and mates.

How this amazing sense works to discriminate odors is controversial. The mainstream mechanism vying for consideration is chemical. Often referred to as the shape theory of olfaction, it proposes that attractive and repulsive interactions between molecules come into play when an odorant interacts with its receptor in the nose – ultimately triggering perception of the smell. These molecular interactions reflect the chemical features of whatever you’re sniffing: molecular size, shape, and functional groups – combinations of atoms such as hydroxyl (OH) or carbonyl (C=O) that possess special chemical reactivity.

The alternative mechanism is called the vibrational theory of olfaction. It assumes that transfer of an electron occurs when odorants bind with their receptors. This process is thought to occur when olfactory receptors detect odorant molecular vibrations. The suggestion that a molecule’s smell is based on its vibration frequency is similar to how the sense of hearing functions. The vibration theory has been promoted by a popular book on the topic.

Through our new research, my colleagues and I are shifting the debate. Based on our experiments, we conclude that the chemical mechanism is the correct one and the vibrational theory of olfaction is implausible. Here’s how we investigated. Does it pass the sniff test? David Resz, CC BY-NC

Probing the sense of smell

Studies into both theories of olfaction have used a psychophysical approach: human volunteers sniff odor molecules and describe their perception of the smell.

We wanted to reexamine some earlier work that had been touted as support for the spectral theory. Luca Turin’s group had looked at musks, the heavy molecules used as base notes in most perfumes. Their experiment hinged on whether people could distinguish by smell what are called isotopomers: molecules with all their regular carbon-hydrogen bonds replaced with carbon-deuterium bonds. Deuterium is just a heavier isotope of hydrogen, due to its extra neutron. Isotopomers are considered identical in structure and functionality.

The logic of the experiment was that because the vibrations of bonds to hydrogen and deuterium are very different, isotopomers should smell different. And that’s what Turin’s group found in the case of these musks that had a relatively large number of hydrogens or deuteriums present.

Our new research involved a biophysical, rather than the usual psychophysical, approach. Given the differences in the smell reported for the musk isotopomers, my coworkers and I asked whether olfactory receptors highly responsive to musks could also distinguish musk isotopomers. My coauthors Hanyi Zhuang and Hiroaki Matsunami screened the entire repertoire of human olfactory receptors, looking for those that responded to musks. They introduced DNA encoding each of 330 olfactory receptors into tissue culture cells in the lab. Then they used an elegant technique to measure odorant-binding to the receptors: receptor activation is converted into light emission that is easy to quantify. We identified one receptor, OR5AN1, which was strongly activated by musks. Chemical structure of muscone, the fragrant musk originally isolated from the Siberian musk deer. In the deuterated isotopomer, all 30 hydrogens are replaced by deuterium. Николай Усик, CC BY-SA

As in the earlier experiment, we prepared musk isotopomers and other compounds by replacing all hydrogens with deuterium. The musk isotopomers prepared included muscone, the fragrant musk originally isolated from the Siberian musk deer.

When we exposed receptor OR5AN1 to highly purified pairs of musk isotopomers, no difference in the magnitude of light emission was seen, which indicated identical response and therefore identical binding. This was true for nine other olfactory receptors and isotopomers of their substrates we examined.

But how can isotopomers that interact identically with their primary receptors be perceived as smelling different? And how does this new observation fit into the debate on the mechanism of olfaction? How we perceive odor molecules

Odor perception begins with inhalation of a volatile odorant. In the nose, the odorant dissolves in the nasal mucus layer surrounding the olfactory receptors. These receptors are found in the olfactory epithelium, a three-square-inch patch of tissue lying on the roof of the nasal cavity behind each nostril. The receptors themselves consist of a chain of amino acids anchored into the plasma cell membrane and traversing it seven times.

Chemistry occurs in the nasal mucus because enzymes capable of modifying the odorant structures are present. These enzymes protect the receptors against injury by toxic odorants. Each receptor can detect several related odorants that pass through the nasal mucus, although with intensity that varies from odorant to odorant. Most scents are composed of multiple different odorants.

Each odorant typically activates several olfactory receptors, which in turn indirectly send electric signals to the brain. Each unique odor, through the identity of the different olfactory receptors activated and the intensity of activation in each case, leads to an “odorant pattern” unique to that odor, which the brain perceives as the smell of musk, lilacs, garlic, and so on.

This is the basis for our ability to recognize and distinguish tens of thousands of unique odors.

How could isotopomers be perceived to have different scents?

Subtle differences occur when hydrogen in a molecule is replaced by deuterium, since carbon-deuterium bonds are shorter and stronger than carbon-hydrogen bonds. As a result, enzymes could transform deuterated versus undeuterated compounds at varying rates. These different rates of reaction are well-known and could account for the differences in perceived smell of isotopomers.

Maybe it’s all down to perireceptor effects – the kind of chemical transformation that occurs in the nose before the odorant reaches its receptor. Trace impurities present to a differing extent in isotopomers could also lead to differences in perceived odors.

My coworkers and I found no receptor that discriminates between isotopomers. We therefore argue that the vibrational theory of olfaction is implausible. If the receptors weren’t responding to shape but to electron transfer, we should have been able to observe that in the form of a different receptor response between the pairs of isotopomers. Bio-molecules, such as enzymes and other proteins, interact most strongly when they have complementary surfaces and complementary distribution of active groups. Scientists commonly use the “lock and key” metaphor for interactions of complementary bio-molecules, but the metaphor should not be taken literally: bio-molecules are flexible, and molecular size and functional group attractive and repulsive forces are all involved.

Olfactory receptors would likely employ a similar mechanism since they are proteins, structurally similar to drug receptors that typically utilize “lock and key” mechanisms.

My coworkers and I have computationally modeled such interactions for olfactory receptors, discovering a role for copper ions. Finally, coauthor Seogjoo Jang examined the theoretical grounds supporting the vibration theory of olfaction and found them unrealistic in a biological milieu.

This is one case where a study’s negative results – not finding something – could have a major impact on mainstream thinking about how we smell.