The World Health Organisation has declared the yellow fever outbreak in Angola a grade 2 emergency.This means that it can have moderate public health consequences. This requires an emergency support team run from the organizations regional office providing support. Health and medicine editor Candice Bailey spoke to Jacqueline Weyer, a senior medical scientist from the National Institute for Communicable Diseases in South Africa, to understand the latest outbreak.

How serious is the outbreak in Angola? When last did this happen?

The outbreak started in December 2015 in the country’s capital, Luanda. The province is most affected and has had 281 confirmed cases and 129 deaths.

There are also suspected cases being reported in 16 of the 18 provinces in the country. To date, nearly 1,500 suspected and confirmed cases have been reported, with nearly 200 deaths. This marks the largest yellow fever outbreak in years.

The last time Angola had a yellow fever outbreak was in the 1980s. The county is considered endemic for yellow fever, which means it is known to occur there naturally and cases could be expected at any time. The outbreak culminates from a confluence of factors – including under-vaccination of the at-risk population but also climatic conditions that support the proliferation of the mosquito vector of the virus.

Is Africa a yellow fever hot spot? Why are countries like Angola at higher risk?

Yellow fever outbreaks are reported almost annually in risk countries but in most cases the number of cases are typically not considerable. 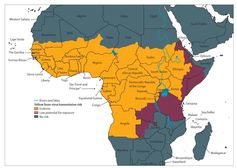 A total of 44 countries located in the central belt of Africa and in north and central South America are considered endemic for yellow fever. In Africa, an estimated 508 million people live in 31 countries at risk.

The virus is present in tropical and subtropical areas. It circulates naturally among some primates and certain types of mosquitoes. In African countries different types of Aedes mosquitoes carry the disease. The Aedes aegypti mosquito is the most important vector of the virus to humans in urban settings. It is typically active during the day. In South American countries mostly Haemagogus mosquitoes are responsible.

When there are conditions such as heavy rainfall in an area, the proliferation of mosquitoes can lead to an increase in the number of human cases, which consequently results in an outbreak.

What is yellow fever and how do you know you have it?

Yellow fever is a vaccine-preventable viral disease transmitted by certain types of mosquitoes.

If you were bitten by an infected mosquito it may take three to six days to develop any signs of disease. In many cases people might not even know that they are sick – they tolerate the infection well and recover quickly without support. In some cases, the outcomes may be more severe. This is often seen in older people.

If you become sick with yellow fever you may experience fever and general flu-like symptoms such as tiredness and body aches in the joints. People sometimes also complain of nausea, loss of appetite, vomiting and dizziness.

In some cases the infection will have a more serious effect on the body’s organs. This can be fatal. For example, the liver may be severely affected and the person may become jaundiced or yellow in color. This is where the disease gets its name from. Some people may also start bleeding. This includes blood in their stools or urine, or oozing from needle puncture sites.

How do you get it?

You can only get infected with the virus if you have traveled to a country where the disease occurs and if you have not been vaccinated.

The virus is transmitted to humans primarily through mosquito bites.

You are likely to get yellow fever only if:

Human-to-human transmission of the virus is rare and is usually only associated with transmission in a hospital setting. In most of these instances health-care workers come into contact with contaminated equipment or other materials.

Is there a cure?

As with most viral diseases, there is no cure for yellow fever. Treatment is supportive. This means that the doctor will treat your symptoms.

Yellow fever can be prevented by vaccination. A yellow fever vaccine is required before travelling to a region that is endemic. You should get the vaccination at least ten days before traveling so that your body has time to respond and produce protective antibodies.

The vaccine is effective, safe to use, fairly cheap and provides lifelong immunity. People who have compromised immune systems may be precluded from vaccination and will be discouraged from traveling to risk areas. These include people living with HIV/AIDS, those on immunosuppressive drugs, infants under nine months old and pregnant women. People traveling to a yellow fever endemic area should consult their closest travel clinic for more information.

Where are the big loopholes in tackling the spread of yellow fever?

The biggest risk for outbreaks of yellow fever is rapid urbanization.

Although there are ongoing initiatives to provide population-wide yellow fever vaccinations in risk areas, the rapid increase in the population in some cities makes this a challenging goal.

In Angola, mass vaccination campaigns have been conducted to bring the outbreak under control and prevent further cases. To stop the outbreak, the country developed a national response plan at the beginning of 2016 targeting more than 6.4 million people for yellow fever vaccination in Luanda alone. About 87% of people in the city have been vaccinated so far.

But the World Health Organisation has also flagged the risk of the disease spreading across borders and internationally.

A travel ban has not been placed on Angola, but if you’re traveling to the country – and other endemic regions such as Asia and Latin America – you must have yellow fever vaccination certificate.

By Jacqueline Weyer, Senior Medical Scientist, National Institute for Communicable Diseases, University of Pretoria. This article was originally published on The Conversation. Read the original article.