Erin Richards
In recent decades, viral epidemics have risen in ferocity and quantity in continents around the globe. More and more people in not only places like Africa and South America, but also in Asia and parts of Europe have been affected by the spread of emergent and prolific viral diseases.

The Chickungunya (chicken-gun-ya) virus is responsible for some of the havoc wrecked by recent viral epidemics. Transmitted to humans by the Asian tiger mosquito, the chickungunya virus has become a target for vaccine efforts by a cooperative partnership between Top Institute Pharma (TI Pharma), Wageningen University, Erasmus University Medical Center and Nobilon International, a vaccine production company. Through combined efforts of private and public research, funds and innovation, they hope to develop a vaccine to protect against chickungunya virus. This vaccine aims to reduce the
rate of infection and slow spread of the disease through lower transmission rates. 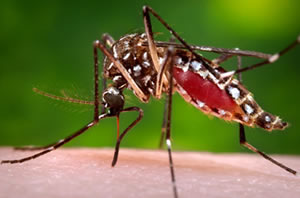 Chikungunya virus, like many other viral infections is transmitted to humans through infected Asian tiger mosquitoes (shown above). There is currently no treatment or cure for chickungunya viral infections and symptoms can last weeks or months. Photo credit: CDC, Department of Health and Human Resources

“The groups that are going to work together in this project have extensive expertise in the field of exotic viral infectious diseases as well as significant experience with the newest technologies in the field of vaccine development,” said virologist, and research supervisor Ab Osterhaus.”

Originally presenting in Tanzania in the 1950’s, the chickungunya virus was previously found only in Africa, but later spread to Asia and parts of Europe. The spread has been attributed to travelers visiting areas with the Asian tiger mosquito and carrying the virus to another locale. In France, there have been more than 100 cases of the virus, and a few hundred cases have been reported in Italy. New information has supported that the Asian tiger mosquito is present in these parts of Europe and is capable of spreading the virus.

"Considering the increasing spread of the chikungunya virus in Asia, and probably also in Europe in the future, it is important to develop a vaccine against this virus that can be used not only to protect
people living in the endemic area, but also travelers traveling to those areas,” said Osterhaus.”

The groups that are going to work together in this project have extensive expertise in the field of exotic viral infectious diseases as well as significant experience with the newest technologies in the field of vaccine development."

This cooperative project has a budget of 2.3 million EUR and aims to achieve a prototype vaccine by the year 2012.