Although the panic factor surrounding the potential threat of a swine flu pandemic is
high, lethal cases of H1N1 have been relatively low. Out of the almost 30,000 cases of swine flu that have been reported, most cases are mild. As of early September 127 people in the U.S. had died of swine flu.   Pat El-Hinnawy, H1N1 Public Affairs Specialist for the FDA, says "So far, [the H1N1 virus] has not shown a very high virulence or a very high mutation rate. For most of the people who get it, it's not a very severe set of symptoms." 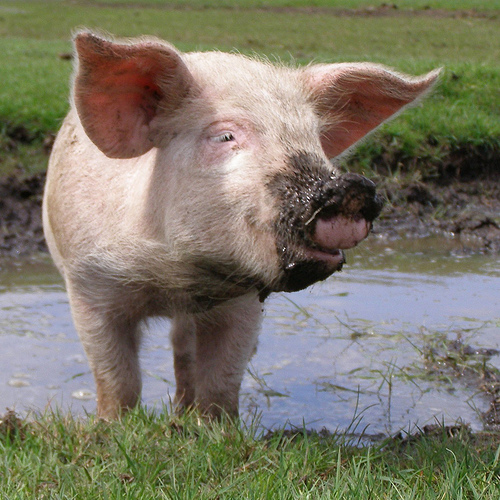 Photo credit: flickr user treehouse1977
That's causing some experts to question the necessity of getting vaccinated. Dr. Arthur
Douville, a neurologist from Los Gatos, California, asked, "How widely should we vaccinate against an influenza virus that is relatively modest in its effects, and which the exact extent of the pandemic we can't really predict?" Good question. When it comes to public health, there's a fine line between harm and safety.
Swine flu is not a new virus. In 1976 there was a spread of infections of the same virus and the government set a large vaccination program in motion. Millions of Americans were vaccinated, but many suffered adverse events such as Guillain-Barre Syndrome.  GBS is a neurological disorder where nerve damage can result in paralysis and loss of muscle function, potentially causing death. The vaccination program was abandoned after three months.

CDC developed PCR diagnostic test to detect novel H1N1 virus.  (photo by Greg Sykes, ATCC)
Vaccination technology has come a long way since the late 70's, as Dr. Jonathon Fielding, a public health officer for the County of Los Angeles, points out. "We have been making vaccines for 33 years since then. I think the rate of complications of vaccine administration is very very small, and the benefits are so great compared to the very small risk."
Today's H1N1 vaccine is identical to the seasonal influenza vaccine distributed every year, except that instead of injecting the flu virus, H1N1 is injected. Both the FDA and CDC say the risks are similar to those associated with getting a vaccine for the common flu.  Arleen Porcell-Pharr, a Public Affairs Specialist for the CDC, says "We expect the 2009 H1N1 influenza vaccine to have a similar safety profile as seasonal flu vaccines, which have very good safety track records."
Samantha Ellinwood, a 1st year medical student at UC Davis believes strongly in her decision to get vaccinated, not only because her school requires it, but because she sees it as part of her obligation as a member of the health-care profession. "Honestly, the risks involved are a lot
lower in getting the vaccine than not getting it," she said. "I am in a position where I could get a lot of people sick, especially people who are immune compromised. It's important for people like me to get vaccinated."
However not everyone is so confident in the safety of the new vaccine for every member of society. Dr. Douville said that he is telling some patients not to get vaccinated.  "If you already have demonstrated that you have some risk of getting a Guillain-Barre like illness, then maybe we shouldn't take that risk. It depends on the risk of the disease. So far, H1N1 is relatively modest risk."
Some critics say the new vaccine has not been thoroughly tested. There is currently a study on the H1N1 vaccine going on in Denver, CO that has yet to publish results.  Jeffry John Aufderheide, who works for VacTruth, a watchdog group, says it's too early to be widely distributing the vaccine. "The trials didn't even start until last week and they are already calling it safe. How are they able to say something is safe without testing it?"
The CDC is confident in the safety of the H1N1 vaccine because it is very similar to the vaccine for the common flu, which has proven not to be dangerous to the majority of the population. The CDC currently recommends that pregnant women, caregivers, healthcare and medical personnel, be among the first to receive the 2009 H1N1 vaccine. Additionally recommended for vaccination
are all people between the ages of 6 months and 24 years as well as people ages 25 to 65 with health conditions associated with medical complications from influenza. The inoculation also comes in the form of a nasal spray, which can be risky for pregnant women and people with chronic medical conditions.
Erin's Spin
More Articles All Articles
About