Erin Richards
In general, science is like an episode of "LOST"; one question gets answered but that answer raises two more questions. The discovery of DNA and genes has answered many questions about who we are and why we are, but to what degree remains a mystery.

'Nature Versus Nurture' has been an argument for decades. Nature proponents state that genes are primarily responsible for everything, including our eventual personalities and behaviors, and that they can all be explained by certain sequences of DNA. The Nurture argument instead says that although genes and DNA play a part of our anatomy and other physical aspects, our environment, exposures and experiences are determines our personalities and behavior.

In general, its common convention to agree to disagree or to reach a compromise and cede that both work in conjunction to produce the results of a modern complicated human being. But there are some things that cannot be explained by one, and may suggest that we take a closer look at our origins, at our specific biology to uncover some fundamental truths about ourselves.

Even in today’s modern day society, infused with the power of new and emergent technology and refreshed with the tenants of progressive ideals, we still have an overwhelming amount of social gender stereotypes that persist and pervade our culture. These gender-based biases include ideals that women are responsible for the home while men are responsible for providing money and other resources. These have a myriad of connected stereotypes based upon the same ideals. Another common gender bias deals with sexual presence and selection of mates.

Socially, when males have several sexual mates, this is seen in a positive light by his peers, and is held as the ideal. However, when females engage sexually with more than one partner, she is deemed dysfunctional and earns the titles of many unpleasant names.

These are conventions that nearly everyone in our society bemoans as unfair, unreasonable and just plain wrong. So the question remains if we largely agree that these biases are harmful, why do we still adopt them into our cultures? Perhaps it is our actual biology that reinforces these social concepts, and nature has more to do with our social conventions than previously suspected.

The basic reason for our existence is to reproduce, and by doing so, pass on our genes. As animals, this is our primary motivation in life. Our genes and chemistry urge us to make babies and to do whatever it takes to have a high genetic fitness. Thus, based on our biology, these conventions make sense as a way for us to act. Sperm production costs little energy production for males and can be made throughout life following puberty.

In essence, there is no shortage of sperm, and its commonality makes it abundant and of little value. However, female eggs are much rarer, comparatively. They take much more energy to make; only one is released per month and females only cycle through eggs for a few decades, at most. Additionally, aiding sperm to an egg doesn’t hinder males, whereas a fertilized egg while cause the female to care for it for the next nine arduous months, taking up a large amount of time and energy.

For other mammals, this dynamic is undertaken carefully, as gestation periods greatly hinder a female’s time for foraging, and leave her vulnerable to fatigue and predators. 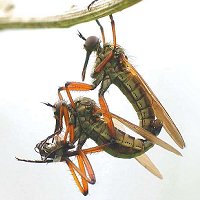 Dance flies, shown above,  often bring females "nuptial gifts" which are often gifts of food for females. This is an incentive (as well as distraction) for the females so that males can mate with them. Nuptial gifts give the female energy for time lost copulating when they could be foraging. It also decreases the chances that the female will then eat the male after copulation. Photo credit: NC State University

Based on the biology of our gametes, it makes sense that men should try to engage as many females as possible and females should in turn make a selective choice for a few mates. For males, every sexual encounter with a different partner is a chance for offspring, to increase genetic fitness, and to pass on his genes. For females, after the first encounter (if resulting in fertilization) there is no benefit until that offspring is born. Males can gain greater genetic fitness by engaging with multiple partners, but females only benefit from the first male who fertilizes her eggs.

In the animal kingdom, this leads to male competition and female selectivity. Males compete for female attention and females use clues to choose the best mates.  Humans, surprisingly, engage in this primal behavior, although using more advanced means. Instead of head-butting other males, or displaying their brightly colored feathers, they display fancy cars, big houses and other expensive trinkets. 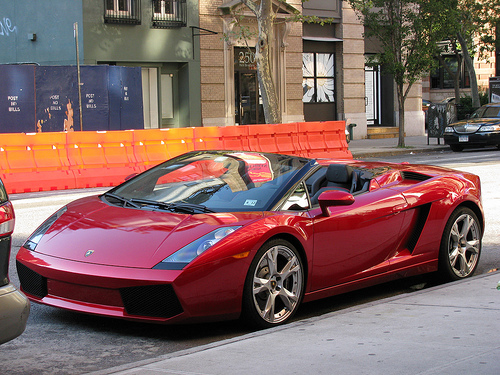 Human males display their desirability to females partly by showing off their resource capability. Having expensive things like this car show females that they have the money to take care of them and their possible offspring if she chooses this male as a mate. Hopefully this red Spyder will attract some female attention along with cops. Photo credit: Flickr user CarSpotter

This lets females know that they are capable of providing for them and their offspring, and is a biological advantage over other males. But human females are also looking for partnership, an indication that the male will help take care of the offspring once they are born, therefore they judge based on other factors that clue them into this characteristic. Another factor of female selection is the vitality of the potential mate and other desirable characteristics that will possibly benefit her offspring. Thus, beauty, intelligence, wit, kindness and other factors will lead a female to select a mate.

Perhaps it is not society that is responsible for our gender biases, but something that lies much deeper than our contrived social conventions. Perhaps there is something in our physiological chemistry, some unseen genetic force that is urging us in certain directions. These biases perhaps do not cause a rift between genders, but mark the biological distinctions of them and our roles as part of the human species.

If we strive to understand our basic biology and how that plays a role in our current culture, perhaps we can mold them into more understandable and advantageous standards.
Erin's Spin
More Articles All Articles
About