Even in the Animal Kingdom, there are some common sense rules. The more likely to get a big return, for example, the more work will be invested. That goes for male-female relationships as well.

A French team of behavioral ecologists demonstrated that in the Peafowl. They found that females with attractive mates invested more resources in their eggs than females paired with unattractive mates. They laid larger eggs and deposited more testosterone in egg yolk, potentially offering a better prospective to their offspring.

Adeline Loyau, Michel Saint Jalme, Robert Mauget, and Gabriele Sorci of the National Museum of Natural History and the Laboratory of Evolutive Parasitology, Paris, investigated maternal investment in the peafowl (Pavo cristatus). The initial idea for the experiment derived from Marion Petrie’s study published in 1994 showing that peahens mated to peacocks with more ornamented tails produced offspring that grew faster and had a better survival. 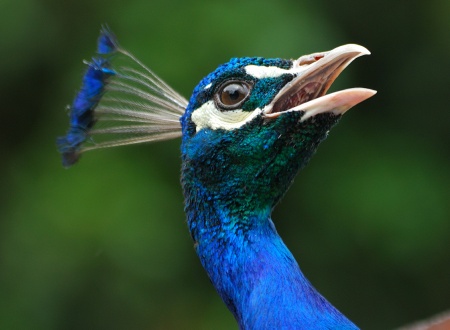 At that time, such results were explained by the transmission of "good genes" from the attractive fathers to the offspring. However, "we now know that the energy spend by the mother in egg production, and especially the allocation of resources such as proteins, lipids, antibodies or testosterone in the eggs can significantly improve offspring growth and survival prospects" says Adeline Loyau, a postdoctoral researcher at the Helmholtz Centre of Environmental Research (UFZ) in Leipzig, who conducted this study during her PhD in France.

Adeline Loyau and colleagues mated peahens with peacocks with various eyespot densities, a trait known to be attractive to females, and collected the produced eggs. After determination of the egg volume, the eggs were artificially incubated. They assessed the testosterone level of two fertilized eggs per male and all the unfertilized ones.

They found that "females paired with males with higher eyespot density spent more energy in the reproduction. They laid bigger eggs containing more testosterone. Doing so, these females potentially prepare a better future for their offspring as in other species, such eggs are known to increase egg hatching success, chick growth, mobility and survival, and even future social rank and attractiveness."

If the allocation of resources in their eggs is that beneficial for the offspring, one can wonder why the mothers do not invest the maximum in each of their eggs.

"The total energy a female can spend in her life is limited", explains Adeline Loyau, "so she has to save it until she can expect a good payoff from her expense. In a previous experiment, we demonstrated that attractive males are also males in better health and with a better immune system. Therefore, when a female mates with an attractive male, she can expect offspring of good quality. For example, more attractive offspring, and offspring that will better survive.

"Our results suggest that the peahens choose to put all their eggs in one basket by favouring chicks with good paternal genes through maternal investment" concludes Adeline Loyau.