After all the conceptual geekery, it is time to move on to the practical sides of patterns. From the previous posts , it may come as a bit of a surprise that patterns aim are very simple to use, and often have a very intuitive application. This is not restricted to the patterns of PAC, but have been one of (and maybe the main) reason why design patterns became so popular in software engineering, and probably also in building architecture. In order to demonstrate this, I will begin with a very simple pattern, which is called difference, of which the description is given below. 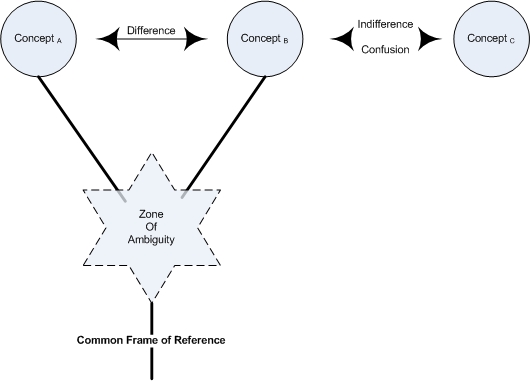 Believe it or not, but difference is a difficult philosophical concept, and is very different in its application in reductionist scientific approaches and, say,its use in Derrida's extension of de Saussure's theory of language. In most scientific enterprises -and I would say also in the common-sense use of difference- an observer sees two or more things that are mutually distinguishable, and thus observes a difference. Science often uses differences in the form of hierarchies, categorisations, layering and so on, and often implicitly assumesthat these differences are distinct;there is no mutual  relationship between the categories, layers, hierarchies, except for the fact that the observer has grouped the distinguishable things together because of some point that she wants to make.

In electro-technics,a difference is a bit more complicated, and the knowledge that has been attained there can help to 'deconstruct' a difference into the 'mini-system' that has been depicted in the pattern above. Say you have a 220 Volt mains electrical outlet and a 9 Volt battery. The two values (220 and 9) are clearly different, but have no mutual meaning until one wire of the outlet (say, the ground wire) is connected to one connection of the battery (say, the minus). So in electro-technics, a difference always requires a common frame of reference.

The distinction 'forks' from this common framing. If there is no common frame of reference, then there is only confusion(which is a form of uncertainty), which means that an observer can make no precise statements about the difference.

But there is more. In ideal situations, the place where the distinction branches from the common frame of reference is assumed to be a crisp one. Mathematics, logic anda lot of scientific models usually implicitly assume this. However, at least in practical situations, the fork is almost always ambiguous. A light switch, for instance, is a constructed difference between 'off' and 'on' (or 'dark' and 'light'). However, if one tries to get the light switch in a middle position, one may discover all kinds of transitory behaviour, which depends on the construction of the light switch.

Some switches may enforce an almost crisp transition, but the exact place of the distinction will be different for different switches, while others may amplify the vibrations of fingers, resulting in an oscillatory switching between 'off' and 'on'. So at least in practical situations, a difference always has a zone of ambiguity where no-one can make precise statements about the difference. So electro-technical knowledge is used to device the structure of the pattern as depicted above.

If this figure indeed is a pattern, then one should be able to see this structure in many other areas besides electro-technical switches. The fork in river should have a common frame of reference (the upper part of the river), a zone of ambiguity (when can we really distinguish the difference?) and the actual distinction when a landmark splits the river in two. I do not think it will be hard to discover the same pattern in other areas as well!

What are the consequences of this simple pattern? Well, if the observation of difference includes these three ingredients, then La Place was wrong in assuming a clock-work universe, because ambiguity is the grease that prevents the clockwork from grinding to a halt. Ambiguity is also the place where choices are made,and where ethics, morality, autonomy and freedom spring from.

Ambiguity is also the reason why most scientific disciplines have two cultures, one of which tends to be formal (by ignoring ambiguity) , while the others (often implicitly) accept, and even embrace ambiguity as an important aspect of our life-world.  In my own research  in artificial intelligence you can see this  in the discussions of what intelligence really is. Most AI research will look for principles. constructions in our brain and other structures (also formal constructs), in order to find a base process that drives intelligence, just as some biologist assume that life can be revealed by dissecting a cell.  With ambiguity and uncertainty, we can also devise an alternative hypothesis of intelligence, that is based on the exploration of ambiguity with the tools (experiences) one has at one's disposal. Intelligence thus becomes the art of reducing uncertainty! In most constructions of artificial intelligence, you see a combination of these two approaches: maximising order and  minimising uncertainty (ambiguity).

I will return to this at a later stage, but for now we can say that traditional (reductionist) science and post-modernity come together in much AI research, and that -as stated earlier- the problems between these all stem from the problem of naive extrapolation of their ideas. What a little pattern can unearth!

A few weeks ago I attended a conference in the European parliament in Brussels (Belgium) on the New Promising Technologies, often called  the NBIC technologies (nano-technology,bio-tech, information sciences and cognitive sciences). These technologies are 'en vogue' because of the Big Promises they make of our future life,well-being, ecology and so on.    The conference was called "Making Perfect Life", and was organised by the Dutch Rathenau Institute, who is (inter-)nationally renowned for their critical assessment of technology in society.  The first session was dedicated to scientists in these areas, and as expected, the sessions tended to explore the interesting ambiguous space between genuine enthusiasm and Grand Claims, but I was especially struck by the second session where philosophers, social scientists and other representatives of the humanities were invited to share their views.

First of all, there was no-one who addressed the topic of a 'Perfect Life' from a philosophical perspective,   for instance how you can learn the art of a good life in the way you behave and conduct yourself. But what struck me the most that the critics of the NBIC technologies were all departing from the Grand Promises, while I know from the heydays of  Artificial Intelligence in the Seventies and Eighties of the previous century that a lot of these promises will never be realised, because life tends to be more complex than the linear extrapolation of the products of science and technology to the challenges of our life-world can address.

Then I realised that the critics also have a stake in the Grand Promises-the common frame of reference-  because it provides the justification of their research, the money they get, and the prestige they acquire in their community.   No one wants to be part of an agenda,which down-to-earth thinkers already know at best only will be partially addressed successfully. Then I suddenly realised that I was applying the pattern of difference to a conference, looking for the three ingredients and devising questions (which I did not get to ask, by the way) by analysing the differences between the participants and highlighting the common frame of reference, the zone of ambiguity, and the confusion!

I never expected twenty years ago that a deconstruction of a light switch could be so useful!