Tommaso Dorigo
Today at CERN a workshop started on the physics of the High-Luminosity and High-Energy phases of Large Hadron Collider operations. This is a three-days event meant at preparing the ground for the decision on which, among several possible scenarios that have been pictured for the future of particle physics in Europe, will be the one on which the European Community will invest in the next few decades. The so-called "European Strategy for particle physics" will be decided in a couple of years, but getting the hard data on which to base that crucial decision is today's job.

If you need a bit of context to make sense what this is about, let me explain. CERN, the european laboratory for nuclear physics, hosts the largest, highest-energy particle collider ever built, the LHC. In 2012 this machine has allowed its main experiments ATLAS and CMS to discover the Higgs boson, a particle hypothesized in the sixties by a bunch of visionaries, and which took over forty years to find. But the LHC is meant for more: since 2009 it has been smashing protons and heavy ions at higher and higher rates and energies, producing data which have been used to produce about two thousand scientific publications.

Those results significantly increase our knowledge of the subnuclear world, but as often happens in Science, the opening of a closed door reveals others, protected by harder locks. The LHC will continue to collect data for twenty years, and physicists are questioning themselves on what will have to come next, for the machines they need require twenty to thirty years to build. There are many options: upgrading the LHC, building a bigger machine, or taking different ways - like building a muon collider, or embarking in still other endeavours. 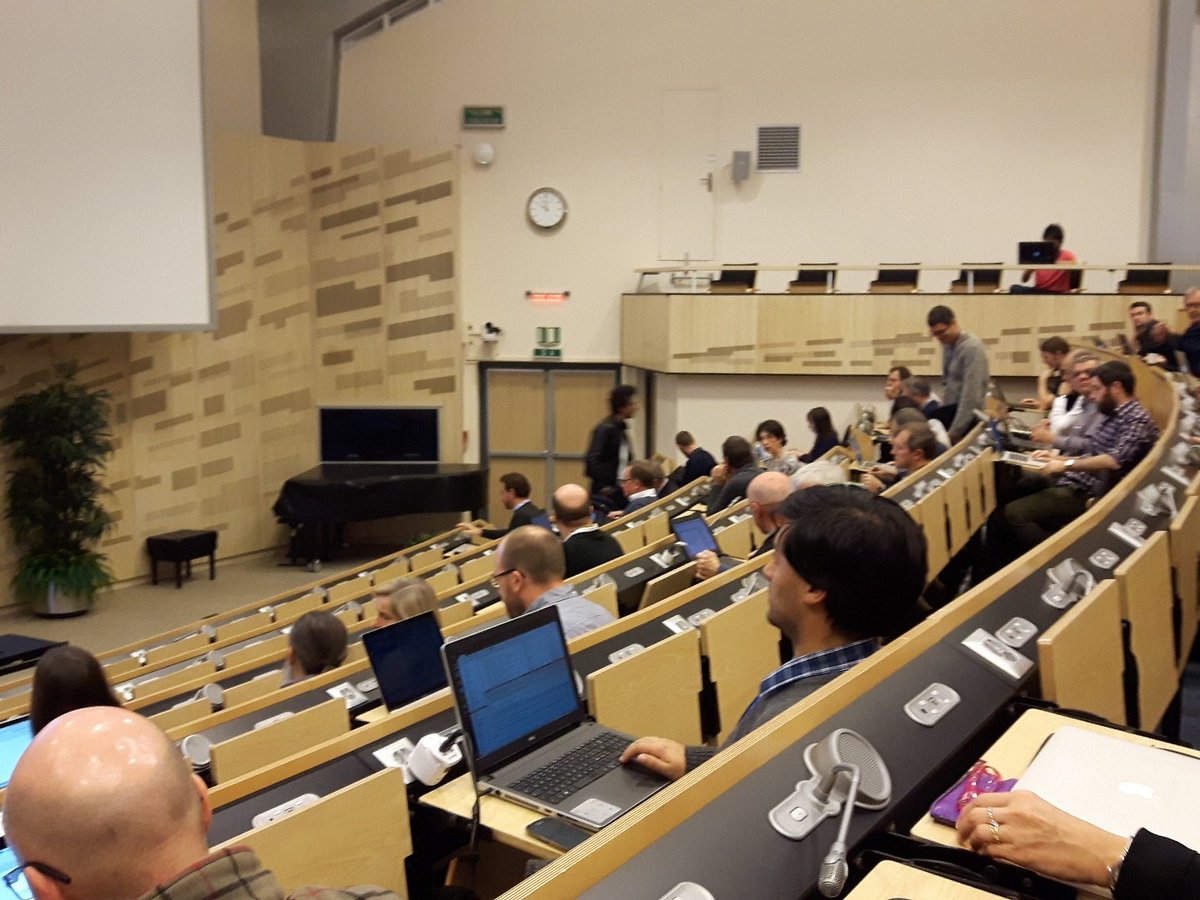 The workshop counts hundreds of participants: theorists, experimentalists, engineers and accelerator physicists. I found many old friends here, but luckily also saw many young physicists willing to contribute and make a difference. The workshop will spawn working groups activities that will last throughout 2018, hopefully stimulating its participants to produce useful answers to many questions. The questions on the table are: what precision will we achieve on our understanding of the Higgs sector with the High-Luminosity LHC program? Will a high-energy LHC qualitatively change that picture? What discovery chances do we have for new particles and interactions in the various possible scenarios? What schedule gives the best bang for the buck? And I am only scratching the surface.

Of course, the question that everybody would love to have an answer for is not being asked. What gives the better chances of a future Nobel prize in Physics? Nobody can answer that question, as there is no knowledge of what lies beyond. We can only hope that Nature (the bitch, not the magazine) has been kind enough to let us look inside its most inner workings, but maybe the luck of particle physicists has just ended. Yes, there are unsolved problems that the Standard Model is not answering. Yes, the Higgs boson should be much heavier to make sense. Yes, the SM does not explain the weakness of gravity. Yes, the hierarchy of fermion masses is puzzling and cumbersome. So what? It might be that we will die without answers. Maybe Nature really is a bitch.

To me, as I listen to many extremely informative talks ranging from a discussion of how to cram 16-tesla curved magnets longer than a semi-truck in the LHC tunnel, to the issue of how to cope with several billion collisions per second, to the problem of how to avoid the electronics to fry from the huge radiation levels, this all seems a bit too distant in the future to really be exciting. We are talking of deciding what to do with our lives as physicists in the years 2035-2050. And I know my own answer - I will be retired, if I am lucky enough to be still alive, and roaming on a little boat around some tiny Greek island. But many of my younger colleagues will still be in business. So let me tell you something about what's in store for them.

The biggest problem: the human factor

The high-luminosity LHC will be an enormous challenge from many technical viewpoints, but the darnedest challenge in my humble opinion is how to keep together for a decade or more 5000 to 10000 physicists on a project that does not guarantee any excitement to speak of. Picture the following: it is 203X (the X means the date might change a bit), and the LHC is starting to smash protons at the so-far unheard-of instantaneous luminosity of 5x10^34 cm^-2 s^-1. The High-Luminosity LHC phase is on! And as a graduate student you reach CERN, excited to start a life as a particle physicist! Wow.

Yes, wow. The physics isn't any different from that which you studied on textbooks - many of the LHC results on particle searches and Higgs boson properties are literature by now. But the study of how detectors cope with the large interaction rate is absolutely interesting. And yes, the challenge of maintaining a high resolution in the measurement of photons, leptons and jets is an astonishingly complex intellectual challenge. So you start to get involved in some of these problems, driven by your personal interest. In a couple of years, you specialize in some of those studies, and get to the point where you think you have made a difference, but can't do better. Yet the machine keeps running, collecting more and more data, at the same pace of last year.

And so on, for many years to come, during which you become a post-doc, then apply for jobs as a researcher, putting together the applications during long nights of shifts in the control room. All the while, you have to continue to maintain your source code, perform routine operations, sit in meetings where nothing really new comes about, write articles nobody will notice.

You can keep doing this for a while, but soon you will start asking yourself why you're not moving to some other experiment. In fact, while your colleagues in some other leaner and meaner research field publish like chainsaws, the number of scientific publications you produce steadily decreases (who is interested in a new article that reports the same measurement already performed two years ago, but redone with 20% more data, shrinking the uncertainty bars by maybe 10%, or 15% if you were able to shave a bit the systematics in the meantime?), and their interest will steadily decrease.

I think you understand the picture. What motivation can we give to the next generation of particle physicists, if we prepare the ground for a frustrating, repetitive, un-exciting environment? Maybe I sound really pessimistic, but I don't think I am really being one. In fact, I do believe there is a solution to this nagging problem. I don't have it in my pocket, but as a physicist I am trained to think as a problem solver. The first problem is the hardest one: identify that you have something to solve!

So we're in a good situation if we do recognize the challenge facing us. We need to start thinking at a different model of operation of these giant experiments. And we need to think at ways that allow the scientific community to recognize the value and the dedicated effort that collaborators in large experiments spend, rather than giving prizes only to those who find ways to game the system, sit in high-visibility committees, move around and appear smarter than they are.

Right now, the system works because we have had an incredibly exciting  life in the past 8 years: we went from zero to 13 TeV in steps, and we collected datasets that every year made obsolete the one of the previous year. Sure, it was a challenging environment for a post-doc or an early researcher, with the constant struggle to emerge in a huge competition with hundreds of participants; but the excitement made it worthwhile. This is not going to happen any longer, with the possible exception of the first years of a 27-TeV, high-energy LHC. So what is the motivation ? The sociology of such large collaborations must be studied in detail, and different, innovative, ad-hoc ways to acknowledge the scientific merits of scientists who live within these large corporations - pardon, collaborations - must be sought. Maybe raising wages to researchers would be a step in the right direction, but I fear it's not enough...


Tommaso Dorigo is an experimental particle physicist, who works for the INFN at the University of Padova, and collaborates with the CMS experiment at the CERN LHC. He coordinates the European network AMVA4NewPhysics as well as research in accelerator-based physics for INFN-Padova, and is an editor of the journal Reviews in Physics. In 2016 Dorigo published the book “Anomaly! Collider physics and the quest for new phenomena at Fermilab”. You can get a copy of the book on Amazon.