Becky Jungbauer
When your famous exports are Italian mobsters, meatball hoagies, and the horrid track suit + gold chain look, and more recently corrupt mayors/rabbis, you pounce on anything that can give you a little boost.

New Jersey is now second only to California in producing solar energy, now that its biggest utility company is outfitting 200,000 utility poles with solar panels, "part of the state's embrace of a try-anything strategy," the WSJ says.

Instead of bemoaning what it doesn't have -- bright sunshine, high winds, empty land -- New Jersey has looked for places where solar capacity can be squirreled away inconspicuously. In addition to utility poles, the state is pushing solar panels for industrial locations with many flat roofs.

"We don't have the land to do big, grid-connected, utility-scale solar projects, so we've had to think more creatively," said Ralph Izzo, chief executive of Public Service Enterprise Group Inc.

Rooftop projects avoid the environmental hurdles associated with the use of pristine, desert locations, often sought out in Western states like California. Nor is there the problem of trying to get leases from the federal government, the biggest landowner in the West. And, of course, when solar energy is scattered on rooftops, it's literally sitting right on top of customers, so there is no need for major new transmission lines.

A FedEx facility in Woodbridge is embracing the new project: it is expected to be the largest rooftop solar facility in the U.S. when completed in November; 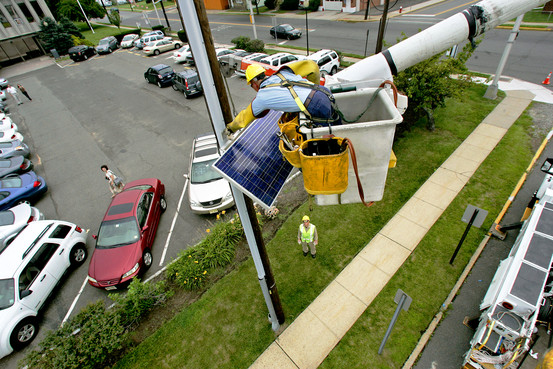 the panels will supply about 30% of its electric needs.

Costs are being defrayed by grants and tax credits, so financially there's an incentive to going solar. But another perk for PSEG is the "smart grid" system - the solar units will have a radio capability, so they can alert the utility to outages and relay other grid data.

Thanks to this effort, the short list of good things to come from New Jersey (a number of musicians including Springsteen, Bon Jovi and Sinatra; Cape May; the Sopranos; arguably the NJ Devils) now includes solar power ingenuity. Bada bing.
A Truth Universally Acknowledged
More Articles All Articles
About