Becky Jungbauer
Perhaps Hank is the smartest guy in the room (so was Enron), but while he and Bloggy are taking Manhattan (as did the Muppets, although apparently not well if it needs to be taken again), Teddy and I went to Washington to fix health care.

I'm not a naive man, nor was there a vacant Senate seat, but I went to Washington anyway. My main objective: hanging out with Supreme Court Justice Stevens, a "shirt-tail" relative. Ok, I lied - my co-primary objectives were to hang out with Stevens, get some great photos for a teacher friend of mine (a la Flat Stanley) and to crush Hank's lame attempt at having the coolest blog mascot. Theodore Douglas Bear ("Teddy") and I weren't really going to fix health care. But we did run into people who want to, and I started thinking about the topic that touches all of us. 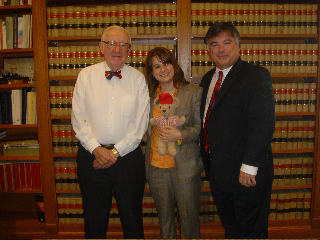 I'll see your Empire State Building, Bloggy, and raise you a
Supreme Court Justice. And my dad. Top that, bitches.

If you follow health care policy, you're aware that the Senate is arguing about taxation of health care benefits. There was a peaceful, silent protest this morning in front of the Senate Finance Committee, ending in the arrest of five individuals not related to the original protest. The committee hearing was a roundtable discussion between senators and experts on the best way to pay for health-care reform, according to the msnbc article. Although totally unintended, my route from Union Station to the Supreme Court took me past the aftermath, so I grabbed a flyer to see what was going on. 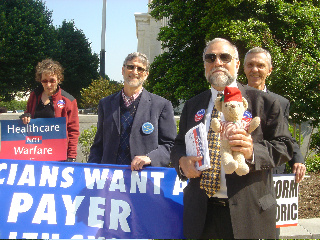 The paddy wagon with lights flashing is just to the right of
this photo - nobody in shackles, just happy protesters.

The folks were advocating a single-payer system and chanting, "health care, not warfare!" The pamphlet, put out by the Progressive Democrats of America, and asks people to ask their representatives to support H.R. 676, a bill iniitally introduced back in 2005 to provide for comprehensive health insurance coverage for all United States residents and improved health care delivery. Michigan Rep. John Çonyers, Jr., revived the bill again this year.

The PDA pamphlet says every other industrialized country has some form of national or single payer health care system, and "that's why the U.S. ranks last among 19 similar countries in preventable deaths - even though we spend twice as much as everyone else."

This ties in well with another topic discussed by the Committee today: whether and how to tax health insurance benefits; the Wall Street Journal said divisions on the issue are beginning to emerge along state lines.

Sen. Olympia Snowe, R-Maine, suggested that "marked geographical variations" among states in terms of health costs should play a role in the debate. She noted that Maine has higher-than-average health costs and could therefore see more taxation than other areas under a capped system.

That drew quick concerns from states with low health costs. Sen. Orrin Hatch, R-Utah, questioned whether varying the tax treatment of health benefits by state would violate the Constitution and questioned if geographic variations would "mean that people in some areas of the United States ... subsidized health care for people who were located in other areas of the United States?"

Actually, Sen. Hatch, we already do that. It's called Medicare. But I digress.

The debate plays into larger questions of why some areas of the country appear to have more efficient health systems than others. Sen. Maria Cantwell, D-Wash., pointed to a Dartmouth Medical School study showing areas with lower health costs often saw better patient outcomes.

"There are systems throughout the country that are higher outcome, lower cost, and before we spend another dime raising someone's revenue somewhere else, we better implement those efficiencies," Cantwell said.

I am a firm believer in the findings of the Dartmouth Atlas, to which Sen. Cantwell referred - I really encourage you to check it out here; you can learn about the project, create your own reports, and more. Essentially, the Atlas has documented and reported on "glaring" variations in how medical resources are distributed and used in the U.S.

I ran a report, randomly selecting four variables: total Medicare reimbursement per enrollee (Parts A and B) (column 1); percent of Medicare deaths occurring within a hospital (column 2); percent of decedents spending 7 or more days in ICU/CCU during the last six months of life (column 3); and Part B Medicare reimbursements for diagnostic, laboratory, and X-ray services per enrollee (column 4). I then asked the Atlas to report data for the national average, Florida (notoriously a state that overcharges for health care), Minnesota (an excellent model for health care, regardless of my home-state bias) and Pennsylvania (current state of residence).

Based on reimbursement alone, Minnesota spends about $2K less than the rest of the nation. So, do Minnesota enrollees have poorer health? If you define health by death occurring in hospital or time spent in ICU/CCU, no - it actually does much better. And what about reimbursement for services? Minnesota again spends the least, but using deaths and/or ICU/CCU time as criteria, it comes out with the best health.

Of course I don't define health by these metrics, and I recognize that there are many mitigating factors behind health care spending. But the basic theory is there - why do some states spend a lot more, but don't seem to reap the benefits of that spending?

The committee was discussing whether and how to tax health benefits, as I mentioned above - Jonathan Gruber, professor of economics at MIT, suggested that geographic variations in a cap on the tax exclusion of health benefits could eventually disappear, once health costs across the U.S. became more consistent. "Over time, that should phase out to recognize that some of those premium differences aren't due to cost-of-living differences, they're due to inefficiencies in the way that medical care is delivered." I can buy that differences aren't due to cost of living differences, but until the variations on a cap disappear? The president of the American Benefits Council, James Klein, said that a limit on the exclusion "would operate as nothing more than a tax increase for individuals who live in higher-cost areas." to support those who can't pay?

These are hypothetical situations and not likely to occur, much less make sense. But it illustrates the difficulty in crafting policy that makes sense, is evidence-based, and actually benefits the people the law is supposed to help. Either way, Bloggy,  the gauntlet has been thrown. Bring it.