Becky Jungbauer
Mary Travers, of Peter, Paul and Mary, died of complications from her leukemia treatment at age 72. You probably know the 1960s folk trio's songs, If I Had a Hammer, Lemon Tree, John Denver's Leaving on a Jet Plane, Dylan's Blowing in the Wind, Seeger's Where Have All the Flowers Gone, and Puff (The Magic Dragon).1

As I was reading her obituary in the Telegraph and the blurb in People, I wondered where singer activists like Mary have gone. As Ricky Gervais said in Out of England, 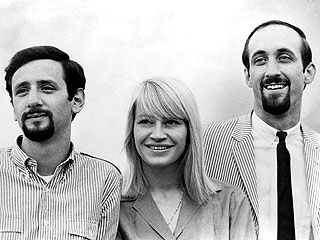 Vietnam was the war with the best soundtrack. (NB: Gervais' current tour is titled Science. Awesome.)

Although tongue in cheek, he has a point - think about all of the music that came out during that period, and how active the musicians were in topics of the day. (Wiki has compiled a long list, if your memory is failing you. Others have as well; there are even books about the contribution to art (poetry, music, etc) the war inspired.)

The last stand-out work of musical activism that I can think of is Green Day's American Idiot. Anger and frustration had reached a critical mass over Bush and his cronies, Iraq, the reputation of America in the world, our lives in general. Maybe that's what it takes - enough people who are sufficiently galvanized over an issue that deeply affects us all. Does this mean Bruce Springsteen will come out with an album on health care soon?

1 One of my favorite songs from the group is actually not from the group at all (although a number of their songs were written/performed by others first), but by Paul (Noel "Paul" Stokey) when he was solo. The Wedding Song (There Is Love) is one of those John Denver types of songs, that are lovely and melodic and lyrically stunning.