Using epigenomic analysis of patient tumors we have found common DNA methylation patterns in the most common subtype of ovarian cancer, high-grade serous ovarian cancer (HGSOC)., which has the highest mortality rate.  The mortality rate is high because patients are generally diagnosed in an already advanced stage

Epigenetic modifications like DNA methylation are known to frequently affect gene regulation involved in cancer-related processes but since epigenetic alterations are reversible in nature, these changes have emerged as attractive targets for epigenetic therapy for cancer.  Yet modeling is a great challence in preclinical research. [1]

Recently, a panel of about 50 ovarian cancer PDXs with different histological subtypes have been established and genomically characterized for future cancer research at University Medical Centre Groningen, The Netherlands [3]. Although several comparative gene expression and mutational studies have been performed for HGSOC PDXs, comparable studies on the epigenome are not yet available. 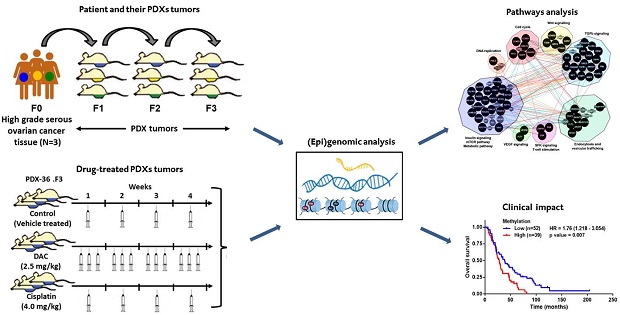 In a recent published report, my colleagues and I performed a genome-wide analysis of the DNA methylome of HGSOC patients with their corresponding PDX tumors, from different generations of tumor propagation [from patient tumor (F0) to first mouse (F1) and from that mouse (F1) to another mouse (F2) and so on (F3) as shown in the figure]. We found minor changes of 0.6-1.0% of all analyzed genome-wide methylation-enriched regions (CpG sites) during propagation showing that HGSOC PDXs were epigenetically stable [4]. Further, they analyzed global methylome changes after treatment of HGSOC PDXs with clinically used DNA demethylating agent decitabine (DAC) and cisplatin, as platinum-containing chemotherapy which is regarded as standard care in first-line treatment of HGSOC. 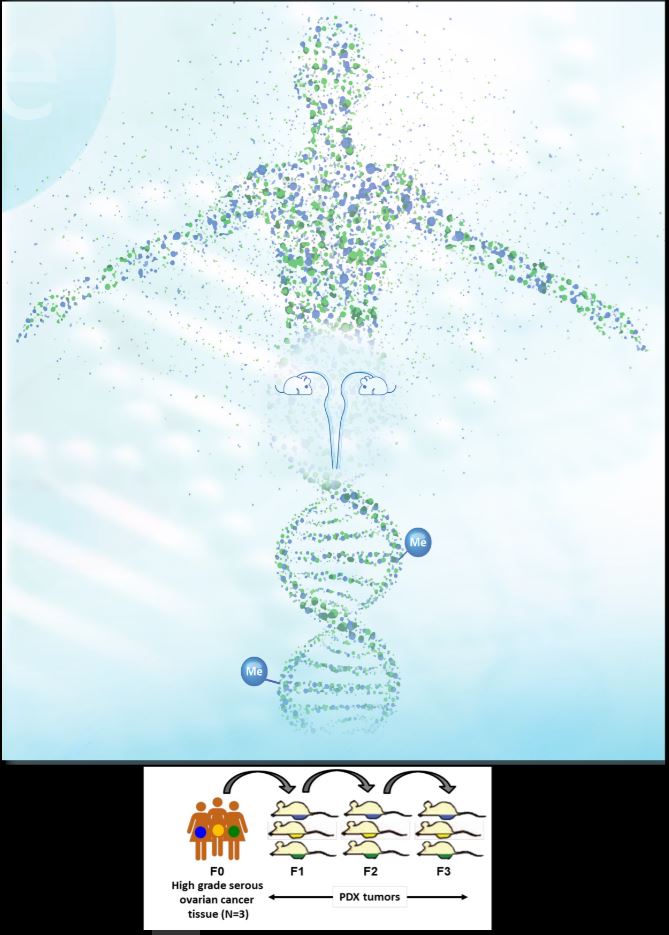 HGSOC PDXs resemble the global epigenome of patients over many generations of propagation and can be modulated by epigenetic drugs and epigenetically regulated genes such as CSK and related pathways were identified in HGSOC. Our results match epigenomic studies on PDX models of various other cancer types like colon, lung, head&neck and osetosarcome, so it's an exciting time PDXs for cancer epigenome studies.

Tushar Tomar, PhD, is a post-doctoral researcher in the Department of Medical Oncology at University Medical Center Groningen, The Netherlands. Website...