Tommaso Dorigo
Well, as some of you may have heard, the restart of the LHC has not been as smooth as we had hoped. In a machine as complex as this the chance that something gets in the way of a well-followed schedule is quite significant. So there have been slight delays, but the important thing is that the data at 13 TeV centre-of-mass energy are coming, and the first results are being extracted from them.

13 TeV is a whole 62.5% more than the 8 TeV of the 2012 collisions, and getting there was a real challenge: first of all, safety systems had to be installed in all the magnets to ensure that no accident like the one of September 2008 will happen anymore. And second, the magnets had to be trained to reach the extremely high field that keeps protons curving along the ring despite their 62.5% higher reluctance to do so.

In the meantime, the detectors were upgraded to better cope with higher expected pile-up (the "satellite" collisions that occur when bunches of protons hit at the center of the detectors) and to further improve their performance.

Since the beginning of June, ATLAS and CMS could collect only a small fraction of the integrated luminosity on which they based their results in 2012. And now the two collaborations are starting to present the first results based on those collisions.

So what are the first things one looks for in a small amount of higher-energy data ? Of course everybody would want to jump at the most energetic collisions, to look for new particles that the higher center-of-mass energy might have "turned on". A new Z' boson, maybe ? Or a supersymmetric gluino ?

No, it does not work that way. The first thing we do is to go after the signals we know very well, and which can be extracted even from small amounts of data. This allows us to understand that everything is under control, that the detector works as foreseen, and that the reconstruction algorithms do their job as planned.

So it is not a surprise that one of the new results that was shown by ATLAS is the cross section for producing pairs of top quarks. The top quark is rare, but it is not exceedingly so in 13-TeV collisions: about once every hundred million collisions you get one pair of such particles. These events are very striking and so they can easily be distinguished from backgrounds. ATLAS could thus extract a precise measurement from the new data, and it is in very good match with Standard Model predictions.

The cross section is shown on the vertical axis in the graph below, as a function of the center-of-mass energy. You can see that as the energy increases, it is increasingly probable to produce those particles. With complex calculations theorists can predict the rate, as shown by the two curves. The red point on the right is the latest measurement by ATLAS: spot on. At least as far as producing top quark pairs, it seems that no exotic processes are playing in at the new investigated energy regime. 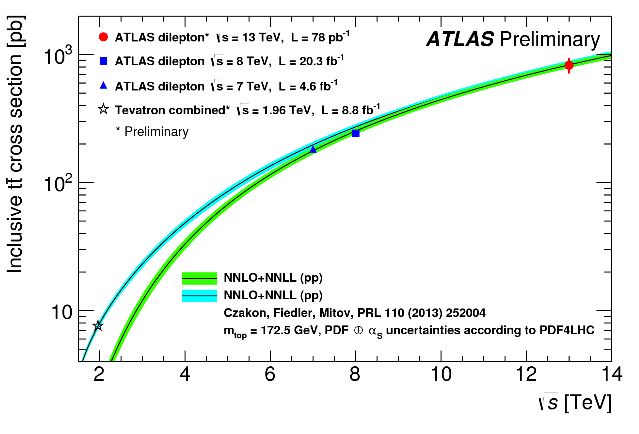 Okay, so the top quark yields no surprises. But what about SUSY ? Yes, SUSY is still there to look for, and everybody is very curious to know if the LHC experiments will finally pull out some new physics result - if not, then one should really make up one's mind about the fact that Supersymmetry is really a beautiful, failed idea. Well, ATLAS did produce some graphs that are preliminary to the search of squarks and gluinos.

They are "control region" graphs - they show only data that should not contain a large new signal, and which are used to create trust in the data analysis methods and prepare the ground for the real search.

So for instance the graph below shows data with one leptons and many jets, plus large missing transverse energy. The signature of missing transverse energy (an imbalance in the energy of all objects produced in the collision, as measured in the plane transverse to the beams direction, where momentum conservation dictates that everything should balance out unless some particle escaped undetected) is common in SUSY searches, as it may flag the production of neutralinos, particles that cannot interact with regular matter.

As you see below, ATLAS has a good understanding of its data in the control region of their search. The graphed variable is the transverse mass of the lepton-missing transverse energy system. As the pink distribution shows, the contribution from SUSY processes in the selected data is small: it has been multiplied by a factor of 10 for visualization purposes, so the data here should include no SUSY events even if SUSY did exist (in the considered model). Instead, the data (black points with error bars) do follow the sum of Standard Model backgrounds quite neatly. The latter is a combination of top quark pairs, W plus jets production, and smaller processes.

In summary, I think you can get away with the following message: the LHC experiments have restarted their business and science is being produced again, at a fast pace. And with a little luck by the end of the year we will start to be able to say more about the existence of new physics than what we already know from the past run... Hence stay tuned for the possible excitement!
A Quantum Diaries Survivor
More Articles All Articles
About