Tommaso Dorigo
A new ATLAS search for supersymmetric signatures in 2011 LHC data has appeared last week in the arxiv. The result ? No hint of a signal, not even for ready money.

So if you are on a hurry, you can just have a glance at the graph below, which summarizes the measurement in terms of excluded regions of a slice of the complicated parameter space of SUSY theories.

Otherwise, if you want to know a bit more of what this is about, I can provide some detail.

Let me write this article by assuming you know nothing. So what is ATLAS ? ATLAS is one of the two general-purpose particle detectors installed at the CERN Large Hadron Collider. The detector is a giant collection of state-of-the-art electronics constructed around the point where protons come in collision, after getting accelerated to light speed by the 27-km-long collider located 100 meters underground at the border between France and Switzerland, near Geneva. 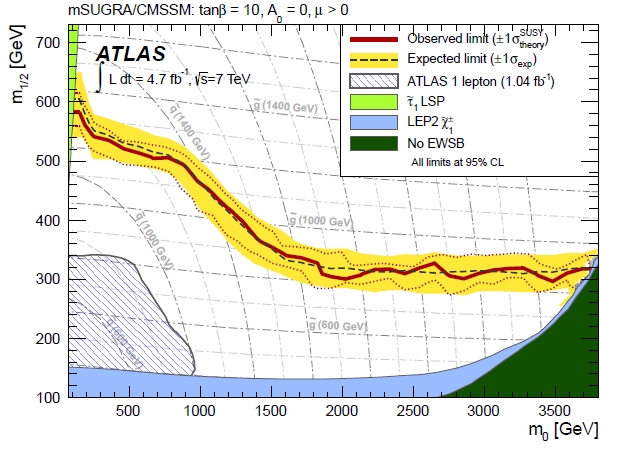 (Above: the ATLAS limit on the SUSY parameter space in the context of the CMSSM, with the choice of parameters displayed on top. The observed 95% C.L. limit is in red, and the corresponding squark and gluino masses can be read in the dashed curves. The limit corresponds to a limit of the gluino at 750 GeV or more in the analyzed parameter space point.)


ATLAS is also the name of the collaboration of physicists that constructed the detector and now operate it and analyze the data of the billions of collisions that the LHC has been producing since 2009. Over three thousand physicists from over a hundred institutions around the world -universities and research centers- spend their life studying elementary particle reactions, in search of new states of matter.

We know that matter comes in twelve different varieties: six kinds of quarks, and six kinds of leptons. Quarks are the building blocks of atomic nuclei: three quarks are the core constituents of the proton, for instance. Leptons include the electron, which we all know, and more fancy heavier copies of the electron, called muon and tau; plus three versions of the neutrino, an elusive, very light and almost non-interacting particle that is copiously produced by nuclear reactions in the core of stars.

Why, yes, you can break a nucleus - at the LHC we do it billions of times every second: a proton is the simplest atomic nucleus that there is, in fact: the Hydrogen atom has a single proton at its center. However, when you break a proton the result includes at least another "baryon" -a particle which still contains three quarks.

So what is Supersymmetry ? SUSY, as we call it, is a theory which postulates the existence of a mirror world of particles with similar characteristics to the ones I mentioned above. The hypothesis, put forth in the late seventies and refined in the course of the last thirty years, has several attractive features for theoretical physicists, since it "explains" several puzzles of fundamental physics. The problem, though, is that this explanation is by no means economical: it entails not only assuming that we are on the verge of finding a host of new subatomic particles, that can only be produced in very high-energy processes (hence the use of the most powerful particle collider in the world, the LHC); SUSY obliges us to introduce over a hundred new parameters in the theory, whose value is not known a priori.

To some, including yours truly, this complication is not worthwhile. However, many bright minds have sold their soul to the idea that the LHC will soon find these new supersymmetric copies of ordinary matter. So the result of ATLAS above, which further constrains the parameter space of the possible manifestations of SUSY, is quite interesting. Indeed, let us give a look at it again to try and figure out what it represents.

On the horizontal axis runs the mass of SUSY particles of one kind, and on the vertical axis runs the mass of particles of the other kind. Why only two kinds ? Because these are "universal masses", not much more than two useful parameters providing a view of the SUSY space. Many other free parameters have been chosen by ATLAS in order to produce the particular graph you see: to each choice of these unknown quantities, there corresponds a particular value of particle masses and production rates. In fact, ATLAS looked for these particles, and not finding any was able to "exclude" the lower left part of the graph: if SUSY existed and the two universal masses had values in the part below the red line, the ATLAS data would be very unlikely to have been produced. Physicists draw the line at 5%: if their data has less than 5% probability of being observed given a set of SUSY parameters, the  corresponding point of parameter space is said to be excluded at 95% confidence level.

The graph shows that the parameter space of SUSY has been constrained seriously. SUSY aficionados will still point out that since we do not know a priori what is the "true" combination of parameters that Nature has chosen for this universe, it is only normal that we can exclude all wrong combinations! SUSY sceptics on the other hand will tell you that not having any clue of which of the parameter points are more probable, then excluding a fraction of them makes the theory less probable.

To clarify the matter I like the following example, which I have made elsewhere already: imagine you suspect that somebody has inserted a gold coin in a cake, and you proceed eating the cake slice by slice, checking carefully in every bite. As you proceed, you might take two different attitudes toward your failure to find the coin: you could either get more and more disappointed, since you take the exclusion of the slices already eaten to mean that it is becoming less and less probable that a gold coin was put in the cake in the first place; or grow more and more excited, since you reason that finding the gold coin is becoming the matter of just a few more bites !

If you have read all of the above, you deserve some detail on the actual ATLAS analysis. How did they actually search for these SUSY particles ? They analyzed the full dataset of 2011 proton-proton collisions, which were taken at a total energy of 7 TeV -an energy roughly corresponding to the mass of 7500 protons. When two protons collide at that energy, they break down and produce hundreds of new particles. The detector reveals their paths out of the interaction point, and measures their energy and identity. Physicists can then try to "track down" the event to what exactly was produced at the heart of the collision, what they call "the hard subprocess".

To search for SUSY signatures, ATLAS selected data which contained collimated jets of particles, signalling the emission of energetic quarks from the subprocess; and electrons or muons, which the proton does not contain in the first place, and whose origin is therefore the decay of short-lived massive particles which are created in the collision. A further typical signature of Supersymmetric particle decays is what experimentalists call "missing energy": this is the signal of a particle crossing the detector with large energy but leaving no trace of its passage. A neutrino can do that, but also a neutralino -a supersymmetric particle which is almost ubiquitous when a SUSY process takes place. 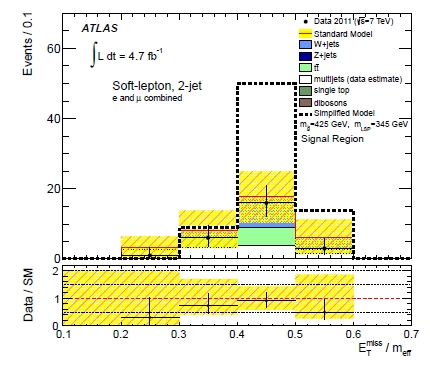 One of the variables which summarizes the possible characteristics of a supersymmetric particle reaction is constructed as the ratio between the observed missing transverse energy (the component of missing energy in the direction transversal to the beams) and the sum of missing transverse energy and the energy of all detected jets and leptons in the event. SUSY events have an expected large component of that variable, as evident in the figure on the right: the supersymmetric particles would have created, if present in the data, an excess in the rightmost bins of the histogram corresponding to the white dashed area. Instead, the data (black points with error bars) distributed according to calculated backgrounds (the red histogram, to which is overlaid a yellow band to display the size of background uncertainties).

The ATLAS paper contains more figures and all the details. I cannot do justice to the complicated analysis they performed, so I need to stop here. However, it is necessary to point out that ATLAS and its competitor CMS have been searching for SUSY particles in many other final states of the proton-proton collisions, and continue to do so with the data that is being collected. Dozens of exclusion plots such as the one at the top of this article have been produced, constraining the complex SUSY parameter space more and more as time goes by. If one of these analyses will one day see a significant excess of events over computed backgrounds, you will read an enthusiastic report in this blog; until then, however, I am growing more and more sceptical as more slices of the cake are consumed !