Tommaso Dorigo
For once I allow myself some self-advertising... I just published on the Cornell arXiv the preprint of a proceedings paper I wrote for the Bormio 2012 conference on Nuclear Physics, where I presented the most recent results from the CMS experiment in a review talk. The paper is titled "Recent Results of the CMS Experiment".

The paper is 33-pages long, and thus configures as a general review of the results that CMS produced from the analysis of data collected during 2011, the 5 inverse femtobarns of proton-proton collisions, which among other things granted a first feeble but trustworthy evidence of a Higgs boson when read together with similar ATLAS results.

33 pages (and 20 figures) may look like a lot, but indeed I was only able to describe with some detail the Higgs boson searches, while I only gave summaries of results on electroweak physics with vector bosons, top quark measurements, and B cross sections. I did examine in some depth the search for the rare Bd->μμ and Bs->μμ decays, which are a hot topic at the moment; I could only then summarize the many SUSY searches, and give a couple of examples of exotic searches (black holes and dijet resonances).

I believe the text is accessible to any interested individual who is not scared by having to sometimes jump the odd couple of technical sentences and try to grasp the most important points. Below I give a few excerpts of some parts which can be of general interest; you will notice that I did add several personal interpretations of the CMS results, which could be considered odd given that I gave the talk and wrote the proceedings on behalf of CMS, but it is actually okay (the paper has indeed been approved by internal review).

In this paper we offer a review of some of the most interesting searches performed with 2011 data by the CMS experiment. As the reader will see, many of the results configure themselves as open questions: is the Bs meson decaying to muon pairs at the rate predicted by the standard model, or at a higher rate compatible with the exchange of virtual massive SUSY mediators ? Does the Higgs boson exist ? Is the Higgs boson mass compatible with the indications of the existing global fits to electroweak observables? Can gluinos with mass below 1 TeV be excluded for most of the SUSY parameter space, throwing a monkey wrench into the inner workings of the most studied extensions of the standard model ?

Most of the above questions are very likely to certain to receive a conclusive answer this year, when the LHC is scheduled to run at a centre-of-mass energy of 8 TeV, and is foreseen to deliver over 15 inverse femtobarns of proton-proton collisions to the ATLAS and CMS detectors. The 1-TeV increase in total collision energy with respect to 2011 may not sound like a large improvement; yet several of the most interesting final states which might produce discoveries of new physics, such as e.g. a new heavy Z’ gauge boson, correspondingly increase their cross sections quite significantly because of their dominant production via quark-antiquark initial states; even precision physics measurements in the top quark sector will benefit from the over 50% enhancement of top-pair production rate, effectively increasing the overall number of analyzable top quarks by a factor of 5 with respect to 2011.

From the section on heavy quark physics:

In an era when heavy flavor physics was to be dominated by B factories –machines providing electron-positron collisions at the Y(4S) centre-of-mass energy– experiments studying heavy flavor properties in hadronic collisions have gone far beyond being complementary to the dedicated electron-positron experiments. In particular, the CDF experiment could match and in some cases surpass the precision of several BaBar and Belle results in the latter’s own field of excellence, thanks to its innovative SiliconVertex Tracker, a revolutionary trigger which relied on the precise online measurement of the impact parameter of charged tracks for the selection of large datasets enriched in B-hadron decays. The triggering on track impact parameter, however, is not currently possible in CMS and ATLAS, mainly because of two otherwise strong points in the design of these experiments: the one-order-of-magnitude higher bunch-crossing rate of the LHC, together with the two-orders-of-magnitude larger number of readout channels of the silicon trackers of new generation of which the LHC experiments are endowed.

The huge cross section of processes yielding bottom quarks in the final state of 7-TeV proton-proton collisions again comes to the rescue. CMS can collect semileptonic B-hadron decays of medium to large transverse momentum thanks to inclusive electron and muon triggers, as well as exploit the significant branching ratio of B-hadron decaysto J/ψ and ψ(2S) mesons by triggering on the resulting pairs of very low transverse momentum muons. Indeed, the simple graph showing the invariant mass of muon pairs collected by double muon triggers speaks volumes about the heavy flavor potential of the experiment (see Fig. 5).

And I cannot resist posting here too Fig. 5, which is in my humble opinion one of the most beautiful, most informative pictures I have seen from High-Energy physics in my career. 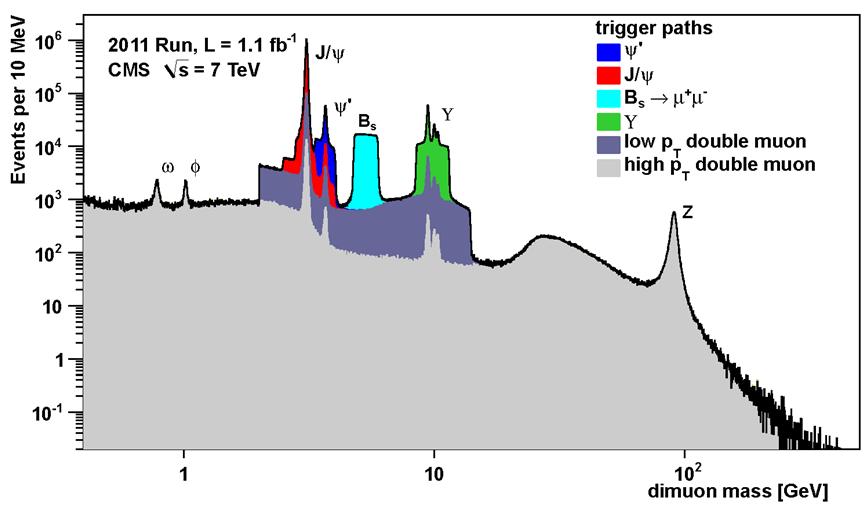 In this graph you see many peaks from dimuon resonances, all together in a wide mass spectrum encompassing from 0.2 to several hundred GeV. You can clearly see the omega, the phi, the J/Psi, the Psi(2S), the three Upsilon states, and the Z boson. Note that the grey histogram is the one resulting from the analysis of a single coherent trigger (high-pT dimuons), while other coloured stacked histograms refer to specialized triggers which add the acceptance to lower momentum muons. Also, there are many other features in the distribution which should be commented and explained. You can see two main "bumps", i.e. variations in the shape of the "background" from non-resonant dimuons. The origins are partly due to the trigger requirements (in particular the right bump at 20 GeV or so, which comes from the "turning on" of events where the two muons go into opposite emispheres, thus getting contribution from Drell-Yan processes) and to the heavy-flavour non-resonant contribution, which mostly yields high-pT muon pairs if these have small angle (and thus smallish total invariant mass).

The CMS experiment has exploited the 5 inverse femtobarns of collisions collected in the 2011 proton-proton run of the Large Hadron Collider to produce a large number of groundbreaking results in searches for new physics and precision measurements of standard model observables. Among the most exciting of these results is certainly the narrowing down of the possible range of masses of the standard model Higgs boson, and the observation of a still insufficiently significant and yet tantalizing excess of events compatible with a 124-GeV Higgs, a mass value where the competitor ATLAS collaboration also observes a hint of Higgs decays. Data from the 8-TeV 2012 run of the LHC is expected to put the final word on the existence of that particle. Currently, however, the most striking conclusion one can draw from the set of produced results is that natural low-scale Supersymmetry is getting close to be excluded across the board of the wide SUSY parameter space; similarly, other exotics new physics models are nowhere to be seen in TeV-scale collisions.