Tommaso Dorigo
The top quark is the heaviest known elementary particle. It was discovered in 1995 by the CDF and DZERO experiments at the Fermilab Tevatron collider after a long hunt that had started almost two decades earlier: it took long because the top weighs as much as a whole silver atom, and producing this much matter in single particle-particle collisions is difficult: it requires collision energies that started to be available only in 1985, and the rarity of the production processes dictate collision rates that were delivered only in the early nineties.

When the top quark decays, it transforms its very large mass into energy of the particles it produces. A top quark produced "at rest" in the laboratory will most of the time emit a bunch of particles in three very distinct directions: three "hadronic jets" that retain memory of the direction of the outgoing quarks emitted in the reaction chain t -> Wb -> qq'b, where q and q' are themselves the decay products of the W boson, and b is the quark directly descending from the top. On the other hand, a top quark produced with large momentum by a very energetic collision will result in those three jets getting closer together in angle, as taken together they also "remember" about the momentum of the top quark.

At the Tevatron, where top quarks were discovered, the energy of the proton-antiproton collisions yielding a pair of top quarks in the final state was just enough to be converted in the two heavy particles' mass: 173 GeV each, or 346 GeV in total; there was not much energy left to impart those two bodies with a large momentum. (The total energy of Tevatron collisions was 1.8 TeV -later upgraded to 1.96 TeV, but only a fraction of this is usually carried by the quark-antiquark pair which actually originates the top quark pair).

At the LHC the situation is a bit different, as the 8 TeV of proton-proton collision energy allows for more boosted top quarks to be produced; and soon those 8 TeV will become 13 (the LHC is due to restart producing collisions in a month). Hence since a few years ago physicists have started to think at how to detect those boosted tops, which may produce three jets that "merge" into a single fat stream of hadrons. A very nice set of experimental tools capable of discern the substructure of fat jets has been devised, and nowadays we routinely "tag" boosted top quarks using them.

Now, a paper just released by Andrew Larkovski, Fabio Maltoni and Michele Selvaggi paves the way to the tagging of "hyper-boosted" top quarks. Top quarks produced with momenta of several TeV are expected in the collisions produced by a future circular collider. And it is precisely those very energetic collisions that may offer the chance of discovering new physics: like the small coin that falls from your pocket and rolls out to the darkest and most secluded spot on the floor, new physics hides in the corner - in our case, the highest-energy collisions.

The signature of hyper-boosted top quarks creates problems from an experimental standpoint: they do not yield any longer a fat jet, as the three quarks emitted in the top quark decay merge together in much narrower, almost pencil-like streams, of the same scale of the detection elements in a typical calorimeter. As increasing further the granularity of a calorimeter instrumenting the detector of a future 100-TeV-scale circular collider is not a smart idea -the scale of the processes depositing energy in matter depends weakly on the incident energy, so the money spent in increased granularity does not yield good fruits- one must rather study how to detect those top quarks exploiting the properties of the phenomenon.

Maltoni and collaborators show that there are further issues when one deals with a 10-TeV top quark: the QCD radiation emitted by such a particle and its decay products increases with momentum, as the "dead cone" where it is suppressed shrinks. One can still devise jet finding algorithms where the jet radius scales inversely with the momentum, retaining some sensitivity to the hyper-boosted objects. A detailed study of observable quantities at calorimetric and tracking level allows to devise a hyper-boosted-top-tagging technique that has good efficiency while keeping a manageable fake rate, as shown in the two graphs below. 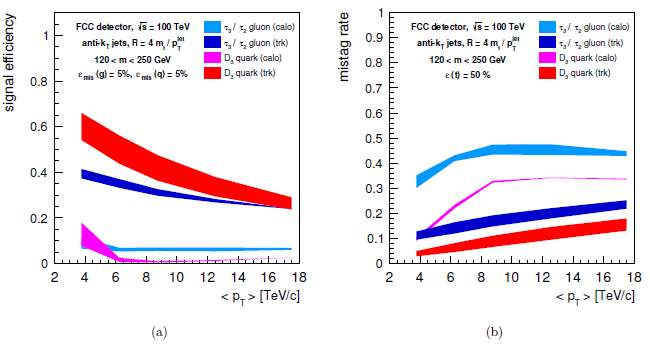 Above, on the left is shown the efficiency with which a hyper-boosted top can be tagged by different selection strategies; the curves are shown as a function of the top pT in TeV/c and refer to the working point which yields a 5% acceptance to non-top jets. On the right is instead shown the acceptance of the algorithms to non-top jets when the top-tagging efficiency is fixed at 50%. It took me a minute to understand the rationale of this choice (one usually shows efficiency and fake rate on the same graph, and I was confused at first), but once you get it the graphs are very informative. Note that using tracking information (red and blue curves) the results are better, as one can retain information on small-scale structures.

All in all, this is a very nice study which looks forward to a distant future, when we will be able to run two 50 TeV proton beams one against the other. As the studies for the detector(s) instrumenting such a machine must start now in order to be ready in 15-20 years, the timing of the paper is good.

The authors already can point out some of the desirable features of a detector, which should have a very high-resolution tracking capability to increase the discovery potential through hypher-boosted object tagging.

The techniques discussed of course do not apply just to top quarks: other massive bodies like higgs bosons, W and Z bosons can similarly be identified and discriminated from backgrounds, and the theoretical issues connected with the topology of QCD radiation in boosted coloured objects are certainly of general interest.
A Quantum Diaries Survivor
More Articles All Articles
About