Tommaso Dorigo
In the last few days CMS released four new publications, which you can download from the Cornell arxiv site. These are exquisite new measurements in the fields of top physics, exotica searches, and higgs physics, and so I thought I would give you the coordinates here, and comment briefly on the first result in the list: paper 1, paper 2, paper 3, paper 4.

The result I want to comment on is titled "Evidence for associated production of a single top quark and W boson in pp collisions at 7 TeV". As the title suggests, this is a search for a particular production of top quarks in proton-proton collisions, one which is both rare and difficult to extract even in the 7-TeV LHC collisions.

We are accustomed to top quarks produced in pairs in hadron collisions. The interaction responsible for the creation of the heavy quark is in this case quantum chromodynamics (QCD), which is flavour-blind and cannot materialize one quark at a time. What this means is that since quarks come with a quantum number defining their flavour (e.g., top quarks have T=1), and since the colliding hadrons have zero net value of that quantum number, the strong interaction cannot "connect" the initial state (a proton-proton system with T=0) with a final state with non-null T. T is conserved by QCD!

What QCD can do, and does at a reasonable rate in 7-TeV proton-proton collisions, is to produce a pair of top-antitop quarks, which have collectively T=0 since T(top)=1, T(antitop)=-1 (the flavour quantum number is additive). Indeed, one 7-TeV proton-proton collision every 500 million produces a top quark pair. A small fraction, one might argue; and yet these events are not hard to isolate, thanks to the very special decay characteristics of top quarks and their heavy mass.

Single tops instead cannot be produced by QCD processes alone, for the same reason discussed above. Production of single top proceeds via several mechanisms, all involving at some stage the electroweak interaction, which turns a b-quark or a lighter down-type quark into a top, with the intercession of a W boson. W bosons in fact are the only means, in the standard model, by which flavour changes.

So what is special about the new process isolated by CMS ? Well, it is a rare one, because it combines the electroweak mechanism (which is less frequent than the QCD one, mediated by a larger coupling constant) with a high demand of energy: two heavy objects are created, a top quark and a W boson. Other leading-order single-top production processes have one top and one or two lighter quarks in the final state, so they "turn on" at lower hard-process energies. You should recall that although the LHC center-of-mass energy of the studied collisions is 7 TeV (8 in 2012), what is actually available for the creation of the final state is most often much less than that: it depends on the fraction of the projectiles' energy carried by the quark or gluon which participates in the hard subprocess. So it does matter a lot whether the final state weighs 180 GeV (as in other more frequent single-top production processes) or 260 GeV (as in the one we are discussing).

As shown in the Feynman diagrams above, the production calls in the fishing of a b-quark out of the initial state, and the emission of a W boson from the quark line, which turns the b into the top quark. The tW final state then decays into jets and leptons: CMS searched for these processes concentrating on the "dilepton" final state, in which the W directly produced in the subprocess and the other W (originated when the top quark disintegrates) both yield electron-neutrino or muon-neutrino pairs. One thus has a signature consisting of two energetic leptons, large missing transverse energy from the escaping neutrinos, and one single jet from b-quark hadronization.

You may well imagine that the nastiest background to these events is top pair production. In fact, top pairs can yield the same signature when one b-quark escapes unmeasured, e.g. in the direction of the beam line, or is undetected because the kinematics make it too "soft" to generate a energetic hadronic jet. So CMS defines three event categories: events with two jets, both b-tagged; events with two jets, with only one jet containing a b-tag; and events with only one jet, b-tagged. Of course, the tW signal mostly populates the third category, while top pair production "prefers" the 2-jet, 2-b-tags category. The first and second category can be used as a nice "control region", where backgrounds must explain most of the observed events. 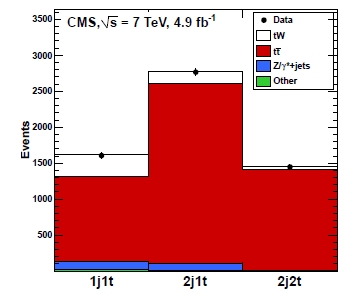 The graph on the right shows the amount of signal (the empty part of the histogram bars) which is present in the three categories. The signal-rich one is the leftmost bin. Note how a little amount of signal exists also in the control regions, but is fractionally smaller.

To isolate the signal further, CMS uses a multi-variable discriminant based on boosted decision trees, a technology that has become very popular in HEP applications in the course of the last decade. In practice the kinematical variables that are capable of discriminating signal from backgrounds are used to construct "trees" of possible selection strategies. These trees are classified according to their discriminating power, using simulated events; the data can then be discriminated using their collective output, which is a single output variable (generically taking values between zero and 1). 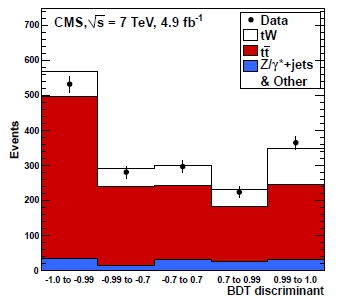 The discriminant does not isolate very strongly the signal from top-pair production, because the kinematics of the two processes are extremely similar. However, some additional power is achieved by its use. The final cross section measurement is performed by fitting the data to the output of the kinematic discriminant (shown on the left for events in the "1 jet 1 b-tag"  signal bin). The result is a cross section σ(tW) = 16 (+5 -4) pb, in agreement with the standard model prediction.

I find it quite nice that these rare processes are now systematically being observed at the LHC. Nobody really doubted of their existence, but each of them adds a stroke to the big picture of the standard model and the physics of hadronic collisions. If you were a theorist you could say you did not learn much from this measurement; but as an experimentalist, you can well say it increases your confidence in the power of your data analysis tools and strategies. I give more importance to these "sideline" measurements than to long searches for non-existing signals. As Galileo Galilei famously put it 400 years ago:

Now ask Google translate to turn that into decent English for you ;-)
A Quantum Diaries Survivor
More Articles All Articles
About