Show Me The Science Month Day 20

Tumor cells wield the enzyme heparanase like a machete to cut a swath
through the dense forest of carbohydrates that make up the sticky
matrix that helps hold communities of cells into tissues. Aggressive,
metastatic tumor cells have to break free of the confines of this
extracellular matrix in order to both grow and colonize new parts of
the body. In humans, heparanase is expressed at high levels in tumor
cells, and it therefore makes an attractive drug target: knock out
heparanase, and tumor cells can't bushwhack their way out of the
confines of the extracellular matrix. 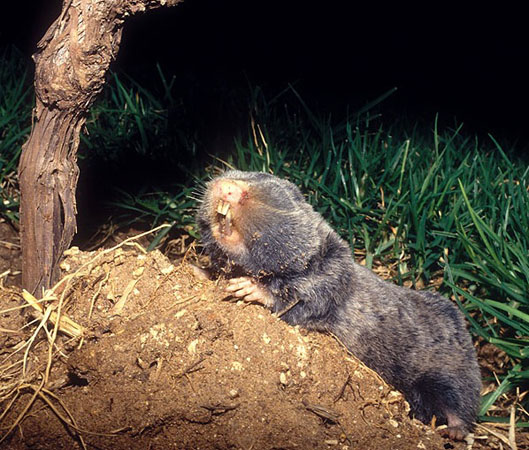 
Blind mole rats live underground, and can survive very low oxygen levels. To survive under these conditions, they  have evolved various strategies to transport scarce oxygen to all of their cells. These animals grow many more blood vessels that surface-dwelling rats, which produces increased blood flow and therefore better oxygen transport to their muscles and tissues.

What makes this adaptation interesting is that such high blood vessel density requires the expression of genes that are highly expressed in human tumors (which turn on genes for signals that increase blood vessel growth around the tumor) - in other words, blind mole rat cells are remarkably similar to cancer cells in many ways. This is a major reason why biomedical scientists study these animals: they help us gain insight into blood vessel growth under low oxygen conditions, conditions experienced by cancer cells.

On order for this blood growth to happen, blind mole rats need lots of heparanse, to clear paths for growing blood vessels, and not surprisingly, blind mole rats express heparanase in many different tissues, unlike us. The researchers found that blind mole rat cells have a unique way of toning down their heparanase activity - under certain conditions, they express a defective version of the heparanse gene which shuts down the active version. (Terminology lesson: a defective variant of a gene that inhibits the normal version is called a dominant negative variant.)

When the researchers took this dominant negative heparanase gene and inserted it into tumor cells in a petri dish, the dominant negative inhibited cell growth. This version of the gene also blocked melanoma growth in mice. Whether this the dominant negative heparanse functions to inhibit tumors in blind mole rats is not clear (they only live about 3 years, and animals with such a short life span generally don't spontaneously develop tumors); but in any case, blind mole rats have come up with a way of modulating heparanase activity that may just be a useful tool in human cancer treatment.


Join me tomorrow (actually, later today, since I'm playing catch-up), here at Adaptive Complexity, for day 21 of 30 Days of Evolution Blogging. Evolution as a science is alive and well. Each day I will blog about a paper related to evolution published in 2009.

Are you a blogger and want to join in? Here's how.
Adaptive Complexity
More Articles All Articles
About