Michael White
Life can be brutal for yeast in the wild. You don't know where your next meal is coming from or what form it's going to take. The key to being a successful yeast is to be metabolically agile, able to switch your metabolic state quickly based on the food source that's currently available on the bark of an oak tree or in the leaf litter of a forest floor. 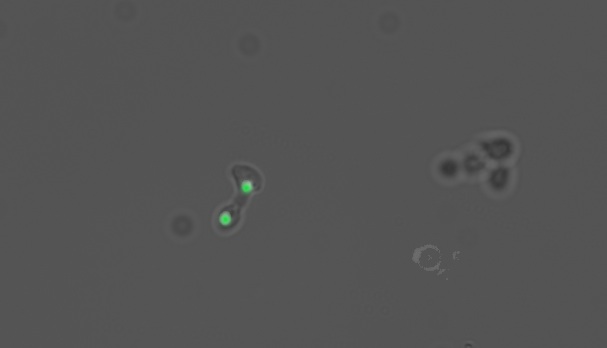 So yeast, especially the set of species related to baker's yeast, have various networks of genes that specialize in making a meal out of different sugars. A yeast has to detect, pump in, and break down various sugars like sucrose, galactose, maltose, and glucose. Each of these sugars has different chemical properties, and therefore yeast requires different sensors, transporters, and enzymes to use each as a food source.


A friend of mine, Dr. Chris Hittinger (who was formerly a member of our department here in St. Louis and has since left, along with our former department chair for sunnier skies in the Mile-High City), made an amazing and somewhat odd discovery a few years back. He found that one particular yeast species, Saccharomyces kudriavzevii, has lost its entire 6-gene galactose utilization network, even though all of the closely related yeast species still retain this network. Somehow, Saccharomyces kudriavzevii lost the need to metabolize galactose, and subsequently the galactose utilization genes were lost.

If that were all there was to this story, it would be a fairly straightforward case of gene loss in the absence of pressure from natural selection, but this story quickly gets really bizarre, and in a paper recently released in Nature, Chris and his colleagues show that this finding is an extreme case of genetic variation caused by balancing selection, in which two different states of an entire gene network have been maintained in a single species. This finding is an impressive example of the power natural selection has to shape networks.


A Network of Pseudogenes

The first clue that something weird is going on in Saccharomyces kudriavzevii was the amazingly rapid and precise obliteration of the galactose gene network in this species. Six different genes, now non-functional pseudogenes, residing on different chromosomes, showed evidence of very targeted and rapid mutational destruction, which suggested not just passive loss, but active selection against the presence of this network. This makes sense, because this galactose utilization network is normally kept in an on or an off state, depending on the food source available. The loss of the wrong gene in this network could leave a hapless yeast with a poorly functioning system that cannot be switched off, resulting in adverse fitness consequences. Thus, if a yeast population loses one of the six network genes, there is strong pressure to quickly lose the rest.

Chris showed experimentally that this is the case: if you knock out the wrong galactose utilization gene in a yeast strain that possesses the other network genes, that yeast strain grows poorly.

A Network of Real Genes

There are some simple potential explanations for this phenomenon, but Chris and his colleagues ruled them out, leaving the strangest explanation of all - a case of balancing selection on an entire network.

Simple explanation 1: These different yeast strains are actually different species. However, the different strains readily mate and produce viable spores, which "that they lack substantial intrinsic reproductive barriers that would isolate them from Japanese strains." This is reinforced by the similarity of their DNA sequence. They are the same species.

Simple explanation 2: The Portugese strains originally lacked the a galactose network, but regained it through introgression, possibly through rare cross-species mating with a species that still has galactose genes. A hybrid yeast that managed to get all six galactose network genes (which reside on different chromosomes) may have had a survival advantage.

This kind of event would be readily detectable by looking at the DNA sequence of the galactose genes. The scientists showed that there is no evidence of introgression: "We easily detected non-S. kudriavzevii sequences in a known S. cerevisiae/S. kudriavzevii hybrid used in winemaking but found no evidence for introgression in any of the 18 wild isolates of S. kudriavzevii. We conclude that introgression had little, if any, impact on genome evolution of the Gal1 strains...Phylogenetic analyses are consistent with a monophyletic origin of the S. kudriavzevii GAL genes and pseudogenes and conclusively exclude introgression from any known lineage of yeast."

This explanation isn't true either. It's clear that the Portugese strains and the Japanse strains share a gene pool: "genome sequence data from the available strains suggests that gene flow between the Portuguese and main Japanese populations of S. kudriavzevii was recently extensive, or that they were founded from the same metapopulation."

With all of the simple explanations ruled out, what we're left with is a case of the active maintenance of two distinct network states within a single species. The researchers call this a BuGNP, a Balanced unlinked Genetic Network Polymorphism. Somehow selection pressure has not only preserved two different versions of each network gene (the non-functional pseudogene form and the active form), but it has kept the entire network together, and impressive feat because these genes reside on different chromosomes. Mating between strains with two different network states would produce offspring with all sorts of different combinations of functional and non-functional network genes, but apparently natural selection weeds those out and only maintains a completely functional or completely non-functional network.


This is extreme, as the authors write:

Regardless of the ecological and genetic circumstances that led to the retention of two very different states of the GAL gene network in S. kudriavzevii, this extreme example introduces a remarkable noveltype of genetic variation in a sexual eukaryote: a BuGNP maintained as two alternative states of six genes that must interact with specific alleles for optimal fitness. The numerous cases of long-term balancing selection2,4,6–9, complex genetic interactions6,10–13 and theoretical con- siderations18,19 all hint that BuGNPs might be important for explaining the evolution of complex traits, but we know of no other definitive examples of balancing selection acting to preserve alternative states of a multi-locus gene network within a single species.

Some of the unique features of yeast make this phenomenon more likely to occur in yeast, and probably unlikely in such dramatic form in humans:

The paucity of balancing selection in humans38, despite being the most thoroughly sampled of any species, suggests that maintenance of extreme multi-locus variation may require some or all of the features we have observed in S. kudriavzevii: broad geo- graphic distribution, strong population structure, limited sexual reproduction, large effective population size, and interacting gene networks whose alternative states can create unfit genotypes when recombined.

This is a testament to the power of selection to shape complex functions that require the actions of multiple genes. Since there is gene flow between the Portugese and the Japanse strains (yeast get around much more than you would expect), the functional version of this six-gene galactose network is always at risk of being scrambled when two versions of the network get mixed by interbreeding. And yet the effects of selection are strong enough to maintain two coherent states of the galactose network.