The US Presidential candidates on fostering science and technology innovation:


For decades, the United States dominated the technological revolution sweeping the globe. The nation’s science and engineering skills produced vast gains in productivity and wealth, powered its military and made it the de facto world leader.

Today, the dominance is eroding. In 2002, the nation’s high-technology balance of trade went south, and it never came back. By 2007, the annual gap between high-tech exports and imports had grown to $53 billion. The gap this year is expected to be the largest ever — approaching $60 billion.

Both presidential candidates, in their careers and in their campaigns, have made detailed arguments for how the nation should deal with technology rivals, sharpen its competitive edge and improve what experts call its "ecology of innovation."

This doesn't get much play in most election coverage, but both US history and a glance at other developed nations make it clear that a government's science and technology policies have a big impact on the health of a nation's S&T competitiveness. Some factors that have made the US outstanding are great universities that provide excellent education and do world-class research with merit-based federal funding, as well as a culture of entrepreneurial innovation that produces outstanding technology companies.

As the world gets more competitive, we need to continue to support S&T at all stages - not just the entrepreneurs who turn science into technology, but also the students who aspire to be scientists and engineers, and the academic labs that produce the basic research driving hot areas like biotechnology.

Some have criticized the call for more scientists and engineers. John Tierney makes a good point when he notes that right now, U.S. employers have a large foreign labor pool of S&T trained workers:

The only “shortage” is of American-born scientists and engineers. But with so many talented foreigners competing for positions here in schools and laboratories, it’s entirely rational for American students to head into fields where their skills are in more demand — and harder to replace with foreign labor.

But that's today, and the signs indicate that the labor pool is changing. The long and irrational process to obtain a visa has made it harder since 9-11 for foreign science PhDs (even ones from places like Canada) to take the jobs that American companies would like to offer them. This frustration, as Tierney notes, could be alleviated by streamlining the visa process and increasing the number of available visas for technically trained foreign workers. But we've now spent nearly eight years discouraging these people from staying, at the very moment when Europe, India, and China are working very hard to attract their US-trained expatriates back home with better funding and better institutions. On top of this, US federal science funding, which pays for much the work these foreign students do while they're being trained, has been declining. The US funding climate is still quite good compared with the rest of the world, but it won't stay that way if we stick with our current trends.

The bottom line is that other nations are now competing more effectively than ever for the supply of foreign workers that have staffed US tech companies and universities, and by the time today's elementary school children are choosing their college majors, the US may very well desperately need more American-born science and math students.

It's no secret why few American-born students choose science as a career option:

Consider the economic fates of two bright college graduates, Jane and Jill, both 22. Jane excels at a top law school, and after graduation three years later, is wooed and hired by a top law firm at the going rate–$125,000 a year, with a year-end bonus of $25,000 to $50,000.

Jill heads down the long trail to a PhD in physics, and after six Spartan years on graduate stipends rising to $20,000 a year, finally gets her degree. Tenure-track jobs appropriate to her rigorous training are scarce, but, more fortunate than her other classmates, she lands a good postdoc appointment–at $35,000 year, without health insurance or professional independence. Three years later, when attorney Jane is raking in $150,000 a year, plus bonuses, Jill is nail-biting over another postdoc appointment, with an unusually ample postdoc recompense of $45,000 per annum. Medicine and business management similarly trump science in earning power.

Somehow this situation is going to have to change if we still want to be competitive 10 or 15 years down the line. As Tierney points out, some will take care of itself - when the supply of tech workers gets too low, companies will start offering PhD grads hefty signing bonuses. The National Institutes of Health has also instituted some reforms that should be continued, such as restructuring funding allocation to raise postdoc pay and benefits and keep postdoc training to less than five years.

So in terms of the US election, it's heartening to see that both candidates recognize the need to nurture our S&T industry, but so far, Senator Obama proposals indicate that he takes a more comprehensive view of fostering innovation by going beyond R&D tax cuts, and focusing on education and basic research as well. Part of this no doubt reflects his choice of advisors, which include former NIH director Harold Varmus, who is pushing to keep basic research funding as an important element of Obama's S&T policy proposals.

Should Senator McCain become president, he'd benefit from bringing actual scientists into his policy-making circle. This would achieve two goals: McCain would get better advice on an important element of our S&T community, and it would show that McCain recognizes that this issue is about evidence-based decision making, and not about ideology or partisanship.

Since we're on the topic of politics, having lived in non-swing states much of my life, I'm enjoying the fact that I now live in a state that presidential candidates pay attention to: 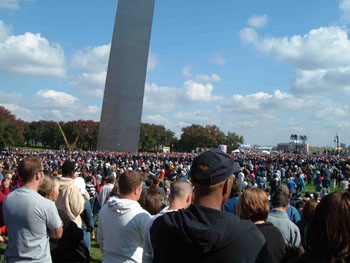 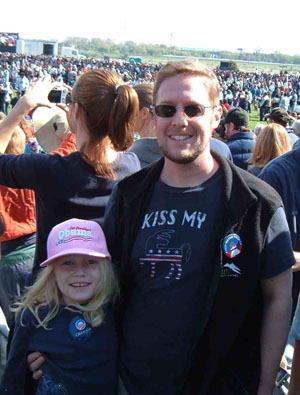 You get to hang out with 100,000 people under one of America's most spectacular national monuments.