Birds are the modern day descendants of dinosaurs, or as paleontologist Kevin Padian likes to say, birds are dinosaurs. But how did birds evolve from grounded, naked reptiles into plumed aviators? Evolutionary biologists have been piecing together the details for nearly 40 years, and this month, a major prediction about feather evolution has been vindicated.

Xing Xu and colleagues at the Chinese Academy of Sciences report the discovery of 120 million-year-old primitive fossil feathers, whose structure matches a prediction about the evolution of feathers made 10 years ago. With this fossil discovery, all major stages of feather evolution predicted by evolutionary biologists have been found in the fossil record. 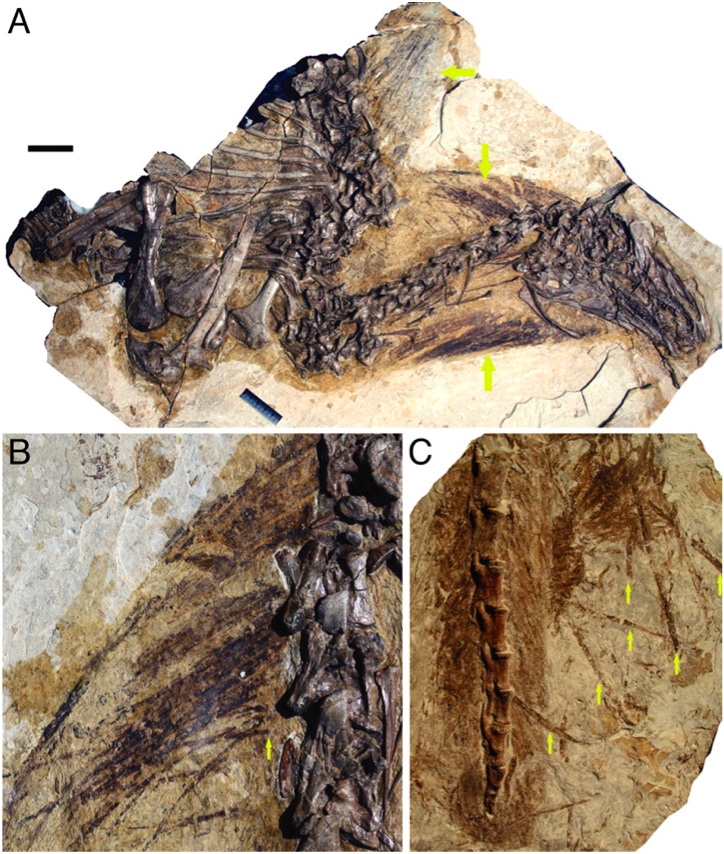 In 1999, Richard Prum at the University of Kansas came up with a model of how feathers evolved. Based on studies of developing feathers in modern birds, Prum argued that we should find five major stages of feather evolution in the fossil record: (PDF)

A transition series of follicle and feather morphologies is hypothesized to have evolved through a series of stages of increasing complexity in follicle structure and follicular developmental mechanisms... The model predicts that the first feather was an undifferentiated cylinder (stage I), which was followed by a tuft of unbranched barbs (stage II). Subsequently, with the origin of the rachis and barbules, the bipinnate feather evolved (stage III), followed then by the pennaceous feather with a closed vane (stage IV) and other structural diversity (stages Va–f). The model is used to evaluate the developmental plausibility of proposed functional theories of the origin of feathers. Early feathers (stages I, II) could have functioned in communication, defense, thermal insulation, or water repellency. Feathers could not have had an aerodynamic function until after bipinnate, closed pennaceous feathers (stage IV) had evolved.

We can observe similar structures in bird embryos, which means that each of the major stages Prum laid out is biologically plausible. And indeed, most of these structures were soon found in the fossil record. With the exception of the stage I "undifferentiated cylinder", made up of a single filament, all of the other fossil structures predicted by Prum have been found in dinosaur fossils, which means that feather evolution most likely happened in the way that Prum suggested.

And now stage I feathers, the simple, single filament structures predicted by Prum, have been found in a Chinese fossil of a human-sized Beipiaosaurus The primitive feathers covered the neck, trunk and forelimbs of this animal. The dinosaur could not fly, consistent with the idea that feathers evolved for other purposes long before they were used for flight. The structure of these feathers and their distribution around the body also make them unlikely to have functioned to regulated body temperature (another potential function for feathers). Xing Xu and his colleagues suggest that the feathers were likely used for display to attract a mate. Whatever their function, it is clear that feather evolution is yet one more example of a major theme in evolutionary biology: structures that have one function today frequently began their evolutionary history serving a very different function.

This fossil discovery is an important verification of an evolutionary model, and the find demonstrates the power of evo-devo as a predictive science. Based on the developmental stages observed in an embryo, we can make predictions about how certain features evolved. (Note that this is not the same thing as saying an embryo literally recapitulates, or goes through, all previous evolutionary stages - it just means that we can gather clues about evolution by looking at development.)

This is the type of result that makes evolution a well-supported science, but for members of the anti-evolution movement, results like this aren't enough. No matter how many major intermediate stages and transition fossils biologists find, there is always some other transition, not yet fully documented in the fossil record, that for them proves that evolution is simply a speculative, unsupported theory. You can see this line of argument in action as intelligent-design advocate David Berlinski tells Eugenie Scott (of the pro-evolution National Center for Science Education) that, although we may have excellent fossils for the reptile-to-mammal transition, the lack of insect fossils means evolution is weak (the exchange starts at about 2:59 in):


So Berlinski thinks that mammals evolved from reptiles, but insects were created by intelligent design? We have great fossil sequences of horse evolution, camel evolution, human evolution, the transition from fish to tetrapods, dinosaurs to birds, reptiles to mammals, land animals to whales, and many others. Other major transitions are not so well documented in fossils, but does this mean that we should infer design in those cases? How about the case of feathers: we have fossil evidence for each of 5 major stages, but are we supposed to believe that in between those stages, the designer came in and mucked around?

Scientists have documented some amazing evolutionary transitions, and the claim that a lack of transitional fossils puts evolution into question is absurd. On the anti-evolution view, the intelligent designer gets squeezed into smaller and smaller gaps, always working were scientists haven't yet found fossils. And it's true that we'll probably never find fossils for some evolutionary transitions, since fossilization is so rare. 50 years from now, while the science of paleontology progresses, the advocates of intelligent design will still be pointing whatever gaps remain and insisting that design could have happened there.

Join me tomorrow for day two of Show Me the Science month. Evolution as a science is alive and well. Each day I will blog about a paper related to evolution published in 2009.